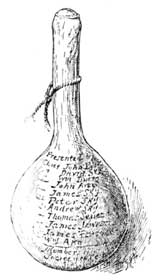 A long, long time ago, some Indians were running along a trail that led to an Indian settlement. As they ran, a rabbit jumped from the bushes and sat before them.

The Indians stopped, for the rabbit still sat up before them and did not move from the trail. They shot their arrows at him, but the arrows came back unstained with blood.

A second time they drew their arrows. Now no rabbit was to be seen. Instead, an old man stood on the trail. He seemed to be weak and sick.

The old man asked them for food and a place to rest. They would not listen but went on to the settlement.

Slowly the old man followed them, down the trail to the wigwam village. In front of each wigwam, he saw a skin placed on a pole. This he knew was the sign of the clan to which the dwellers in that wigwam belonged.

First he stopped at a wigwam where a wolf skin hung. He asked to enter, but they would not let him. They said, "We want no sick men here."

On he went toward another wigwam. Here a turtle's shell was hanging. But this family would not let him in.

He tried a wigwam where he saw a beaver skin. He was told to move on.

The Indians who lived in a wigwam where a deer skin was seen, were just as unkind. Nor was he permitted to enter wigwams where hung hawk, snipe, and heron skins.

At last he came to a wigwam where a bear skin hung.

"I will ask once more for a place to rest," he thought.

And here a kind old woman lived. She brought food for him to eat, and spread soft skins for him to lie upon.

The old man thanked her. He said that he was very sick. He told the woman what plants to gather in the wood, to make him well again.

This she did, and soon he was healed.

A few days later the old man was again taken sick. Again he told the woman what roots and leaves to gather. She did as she was told, and soon he was well. 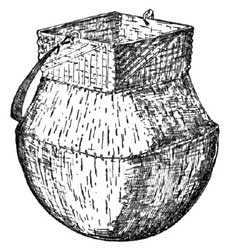 Many times the old man fell sick. Each time he had a different sickness. Each time he told the woman what plants and herbs to find to cure him. Each time she remembered what she had been told.

Soon this woman of the Bear clan knew more about healing than all the other people.

One day, the old man told her that the Great Spirit had sent him to earth, to teach the Indian people the secrets of healing.

"I came, sick and hungry, to many a wigwam door. No blanket was drawn aside for me to pass in. You alone lifted the blanket from your wigwam door and bade me enter.

"You shall teach all the clans what plants, and roots, and leaves to gather, that the sick may be healed.

"And the Bear shall be the greatest and strongest of the clans."

The Indian woman lifted her face to the Great Spirit to thank him for this great gift and knowledge of healing. When she turned again to the man, he had disappeared.

No one was there, but a rabbit was running swiftly down the trail. 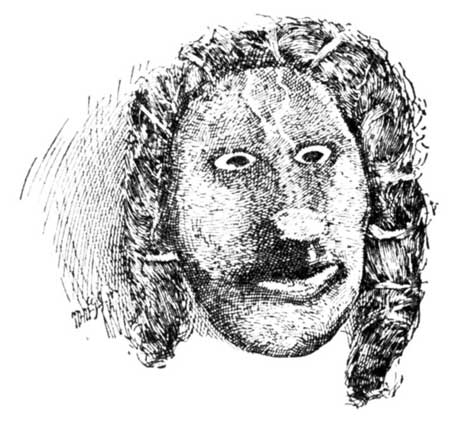 If you use Facebook or Google+ & enjoyed How The Indians Learned To Heal, please tell your friends and let us know to find more like it for you!