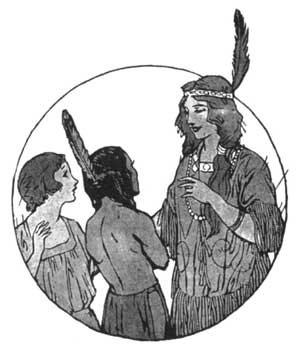 Every boy has wondered how there came to be two of him. Every girl has puzzled over how she happened to be twins. Sometimes she is the good girl,-sometimes a naughty one.

The Indians say this is how it happened.

The world was very young. There was no earth, only a cloud-like sea.

The sea was filled with water animals, and water birds flew over it. All was dark. Light had not yet come.

Then the cloud-sea began to call for light. The Great Spirit heard, and said, "It shall be so. I will make a new place for man to live in."

The Great Spirit called the beautiful Sky Mother to Him. Her face was like the sun, she was so light of heart.

The Great Spirit told the Sky Mother to look down. She, too, heard the cloud-sea calling, and she said, "I will go."

As she began to descend, the animals saw her coming. "See the light," they cried. "Where will it rest?"

One of the water animals said, "I will go to the bottom of the sea and get something for it to rest on."

He went down, but he never came back.

Other animals followed him. But they, too, did not come back.

Then the muskrat said, "I will go. I will be the earth bringer."

He returned, with some mud in his mouth and claws.

The turtle offered his back. As the muskrat placed the mud on the turtle's shell he died. But the beaver came and slapped the mud down with his tail.

The mud on the turtle's back grew very fast. Soon it was a small island. The turtle became the earth bearer. He has continued to hold up the earth ever since.

Now, when the sea rises in great waves, or the earth shakes, the Indians say, "The turtle is stretching. He is wiggling his back!"

Now, since there was a place for the light to rest on, the birds flew up to meet it. They found that the light was the beautiful Sky Mother.

Then the birds spread wide their great wings, and bore the Sky Mother through the air to the cloud-sea. They placed her on the island on the turtle's back. There the Sky Mother had rested some time, when she felt something stirring beneath her heart. She heard voices. One was soft and kind and full of love, the other was harsh and quarrelsome.

Then she looked into the face of his brother, and said, "You shall be named the Dark One."

The island became a beautiful land.

From his mother's beautiful face the Light One made the sun. He set it in the eastern sky, that it might shine forever. Then the Dark One put darkness in the west to drive the sun from the sky.

The Light One gave his mother's body to the earth, the Great Mother from which springs all life. He made great mountains, and covered them with forests from which beautiful rivers ran. The Dark One threw down the mountains, gnarled the forests, and bent the rivers which his brother had made.

Every beautiful thing which the good brother Light One made, the bad brother Dark One tried to destroy and ruin.

And because the first-born of earth were the twin spirits, the Good Mind and the Evil Mind, there has been a good and bad spirit born into every boy and girl who has come into the world since.

So the Indians say!

If you use Facebook or Google+ & enjoyed How Good And Evil Came To Be, please tell your friends and let us know to find more like it for you!