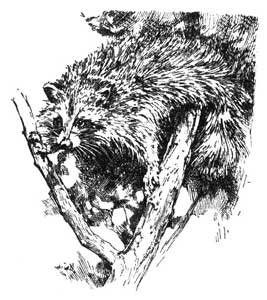 A wise old raccoon sat up in a tree near the river where the bear lost his tail. The coon saw the fox play his foxy trick on the bear, and he did not like it.

"The fox is getting a big head," said the coon. "This must not be. His head must be made smaller. Some of the foxiness must be taken out of it. He is getting too foxy. He thinks he has the cunning of all the animals, and that no one can outwit him. Some one must play a 'fox' trick on him."

Not many days later, the coon saw the fox coming down the trail. The coon was eating some juicy yellow apples that he had found on a tree not far away. As soon as he saw the fox, he ran up a tree, and began to smack his lips as the fox had done to tempt the bear.

The fox stopped under the tree, just as the bear had stopped.

"What tastes so good?" he asked.

For answer the coon threw down an apple to the fox, just as the fox had thrown the piece of fish down to the bear.

The fox took the apple and ate it.

"Fine! Fine!" said the fox, when he had finished the last mouthful. "Where did you get it?"

The coon then told the fox how to find the apple tree. He must follow the trail along the river, down to the pine bluff. Then he must climb the bluff and run toward the setting sun, until he came to an open field. In the center of that field stood a great apple tree. It was filled with juicy yellow apples.

"But you can climb the tree and pick your own apples. How can I get them off the tree?" whined the fox.

"Oh, that's easy," said the coon. "Just back off two bow shots from the tree, then lower your head,-so. Run hard and butt the tree with your head. You have such a big head, it will shake the tree so hard that all the apples will fall at once. Do as I tell you, and you will have all the apples you want for a long time." 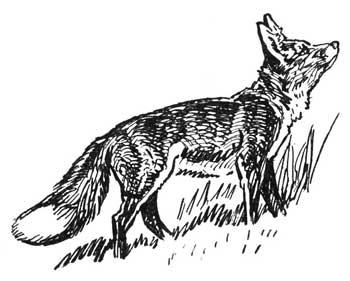 The fox thanked the coon and started at once.

He found the apple tree, just as the coon had said.

"What a fine open place to run in," thought the fox. "I will get such a fine start that when I hit the tree it will shake the world."

Already he began, in his mind, to see the apples falling, like pine needles, and to feel the earth shake under his feet.

The fox did as the coon had told him. One arrow flight he backed off, then another. Then he closed his eyes, lowered his head, and ran swiftly over the thick grass. He struck the tree as hard as ever he could, with his big head.

Not an apple fell, but a dazed, foolish-looking fox fell to the ground.

Next morning as the sun rose, a shame-faced fox was seen running toward the woods beyond the pine bluff. He carried his head low, and he seemed to be playing no foxy tricks.

If you use Facebook or Google+ & enjoyed How The Coon Outwitted The Fox, please tell your friends and let us know to find more like it for you!