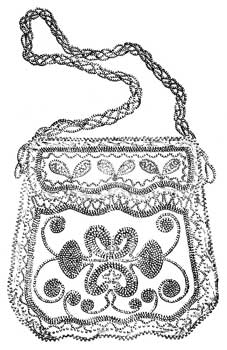 It was bluebird time, many moons ago. Little brooks laughed and danced, and all the forest was glad.

An Indian boy came running through the forest. He, too, was glad, for it was spring!

As he ran down the trail, he saw something hanging from a bush. The bush was but a few rabbit jumps from the trail, so he stopped to see what new flower the spring had brought. He found the new flower to be a tiny papoose cradle.

The boy picked the cradle from the bush, and held it in the palm of his hand. As he looked closer, he saw that there was a tiny papoose in the little cradle. The wee papoose laughed in his face, as he spoke to it.

The boy had never seen so tiny a papoose, and he thought he would take it home to his mother, it was so cunning. She had but nine of her own. He was sure she would like one more, and that there would be a place for the tiny stranger in their wigwam.

He started to run on down the trail, but something seemed to hold him fast. He could not get away. Three times he tried to run, but each time he only circled round that bush. Something held him to the spot.

Just then there came a sharp cry from up the trail. The boy thought some animal must be hurt or in pain. He turned to look and saw a little woman coming. She was less than a foot high, but she ran like a deer to the boy, and cried and begged him to give back her baby.

Then the boy knew it was the love of that little mother that had held him fast. He could not break the love cord between that mother and her baby.

Now the boy had a heart that was soft and kind. He liked to see everything happy. When he saw the little mother crying and begging for her baby, he felt sorry for her.

Many times he had heard his mother tell how every mother bird loves her young; every mother bear, her cub; every mother deer, her fawn; every Indian mother, her papoose. And he knew this little fairy mother must also love her fairy baby, so he put it on the little mother's back, and told her she should have her papoose.

The little mother gave a glad cry, as she felt the baby on her back once more. Then she drew a stone from a bag which she carried, and slipped it on a string of beads that hung from the boy's neck.

The stone shone on his breast like a dewdrop.

"Because you are good, and kind, and unselfish, and because you make everything happy," she said, "you shall wear this good-luck stone. It will bring you whatever you want.

"We Little People give this stone to those earth children only, who are strong and yet protect the weak. Wear it always on your breast. Never take it off, and you will become a mighty chief."

Then the little mother gave another glad cry, and with her baby on her back she disappeared into an oak.

The boy ran on. His heart grew lighter and the stone brighter, as he ran. Before he reached his mother's wigwam, his arrows had brought back game for their evening meal.

From the day when the boy met the little Jo gah oh mother in the wood, and was given the stone, he had good luck. Whatever he did, all went well with him. If he went on the chase, he brought back deer. If he planted corn, it grew tall and fine. No boy could throw a ball as far, or could run as fast as he. He could shoot his arrows to the sky, and could send his snow-snakes skimming far beyond the rest.

So lucky was this Indian boy, that his tribe called him "Luck-in-all-moons." "He wears the good-luck stone," the old people said as they sat around the fire, and they nodded their heads knowingly. But they never knew how he came by it, or why he won the stone.

And when "Luck-in-all-moons" grew to be a man, his tribe made him a great chief. Just as the little Jo gah oh mother had said, he became a chief, though not in the chieftain line.

Because he stood so strong and straight, serving the people, protecting the weak, and doing great deeds, he was called the Pine-tree Chief.

"His feet are planted deep in wisdom and strength," they said, "and his head is not far from the sky. He sees far and points us the way. As the topmost branch of the pine points always to the east, so Luck-in-all-moons shall guide us to the sun rising. He shall be our Pine-tree Chief."

If you use Facebook or Google+ & enjoyed How An Indian Boy Won His Name, please tell your friends and let us know to find more like it for you!