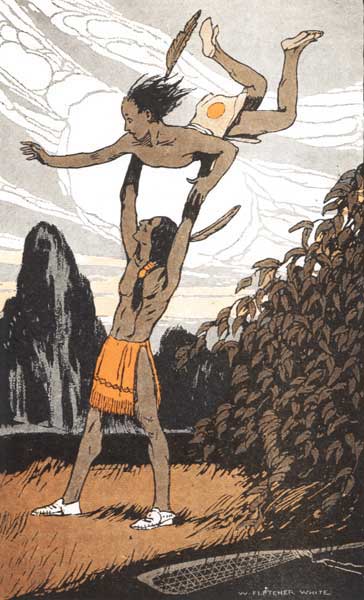 There was once an Indian boy, who thought he knew more and could do more than anyone else. He was so proud of himself that he walked around like a great chief, who wears a war shirt with many scalp locks on it.

The other Indian boys and girls called him Spread Feather, because he strutted about like a big turkey or a peacock.

One day, Spread Feather was playing ball with the other boys. Not once had he failed to drive or catch the ball with his crosse stick. Twice he had thrown the ball with such force that someone had been hurt.

Spread Feather grew more and more pleased with himself, as he played. He began to use tricks and to talk very large.

"No one can play ball as I," he said. "I can catch the swiftest ball that can be thrown. I can throw the ball to the sky. I can run faster than the deer."

Spread Feather boasted so loudly that a rabbit heard him. The rabbit came out of the bushes and sat up on his hind legs. He watched Spread Feather play, and listened to his boasting.

Soon a strange boy was standing where the rabbit had sat.

The stranger said to Spread Feather, "I would like to play ball with you."

"Come on, then!" taunted the boastful boy. "Spread Feather will show the strange ball player how to catch a ball."

They began to play.

The stranger could run like a deer. His balls were so swift and so curved that Spread Feather could not see them. He could not catch one. They seemed to come from the sky.

At last one ball hit Spread Feather on the mouth. He fell to the ground. His face was red with anger, and his lips were red with blood.

He sprang to his feet and shouted to the stranger, "Though I do not like the taste of your ball, yet I can throw you."

"Very well, then," said the stranger. "We will have a game of 'Catch as catch can.'" This is the Indian name for a game of wrestling.

Spread Feather set his feet very hard on the ground.

"My legs are as strong as the legs of a bear," he boasted.

They began to wrestle. Soon Spread Feather's arms fell at his sides. He panted for air. He had no breath and no strength.

The stranger picked Spread Feather up and tossed him over his head like a ball. The boy fell without a word.

When Spread Feather opened his eyes, a rabbit sprang into the bushes.

All night, Spread Feather lay and thought, and thought. He was too weak and too sore to go back to his wigwam. Nor was he eager to meet the other boys.

At sunrise a rabbit hopped near. The rabbit slyly suggested that he might like to play another game of ball.

The boy sat up and said to the rabbit, "Spread Feather is no more. He no longer struts like a turkey. He has nothing to say. He will win a new name. It will not be Spread Feather."

If you use Facebook or Google+ & enjoyed How A Boy Was Cured Of Boasting, please tell your friends and let us know to find more like it for you!