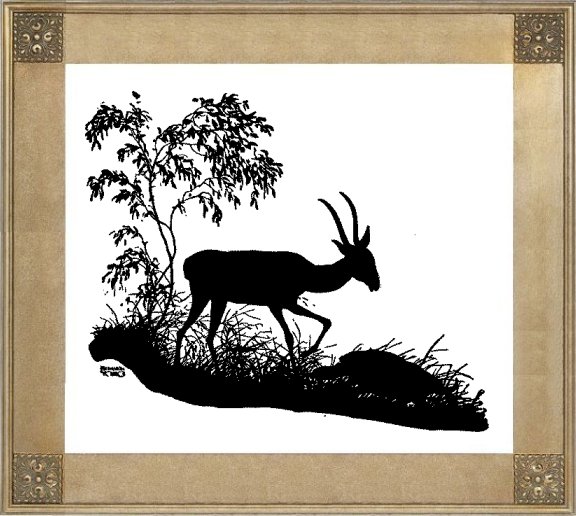 Once upon a time a Deer lived in a forest near a lake. Not far from the same lake, a Woodpecker had a nest in the top of a tree; and in the lake lived a Turtle. The three were friends, and lived together happily.

A hunter, wandering about in the wood, saw the footprints of the Deer near the edge of the lake. "I must trap the Deer, going down into the water," he said, and setting a strong trap of leather, he went his way.

Early that night when the Deer went down to drink, he was caught in the trap, and he cried the cry of capture.

At once the Woodpecker flew down from her tree-top, and the Turtle came out of the water to see what could be done.

Said the Woodpecker to the Turtle: "Friend, you have teeth; you gnaw through the leather trap. I will go and see to it that the hunter keeps away. If we both do our best our friend will not lose his life."

So the Turtle began to gnaw the leather, and the Woodpecker flew to the hunter's house.

At dawn the hunter came, knife in hand, to the front door of his house.

The Woodpecker, flapping her wings, flew at the hunter and struck him in the face.

The hunter turned back into the house and lay down for a little while. Then he rose up again, and took his knife. He said to himself: "When I went out by the front door, a Bird flew in my face; now I will go out by the back door." So he did.

When the hunter came out the bird flew at him again, flapping her wings in the hunter's face.

Then the hunter turned back and lay down again. When the sun arose, he took his knife, and started out once more.

This time the Woodpecker flew back as fast as she could fly to her friends, crying, "Here comes the hunter!"

By this time the Turtle had gnawed through all the pieces of the trap but one. The leather was so hard that it made his teeth feel as if they would fall out. His mouth was all covered with blood. The Deer heard the Woodpecker, and saw the hunter, knife in hand, coming on. With a strong pull the Deer broke this last piece of the trap, and ran into the woods.

The Woodpecker flew up to her nest in the tree-top.

But the Turtle was so weak he could not get away. He lay where he was. The hunter picked him up and threw him into a bag, tying it to a tree.

The Deer saw that the Turtle was taken, and made up his mind to save his friend's life. So the Deer let the hunter see him.

The hunter seized his knife and started after the Deer. The Deer, keeping just out of his reach, led the hunter into the forest.

When the Deer saw that they had gone far into the forest he slipped away from the hunter, and swift as the wind, he went by another way to where he had left the Turtle.

But the Turtle was not there. The Deer called, "Turtle, Turtle!"; and the Turtle called out, "Here I am in a bag hanging on this tree."

Then the Deer lifted the bag with his horns, and throwing it upon the ground, he tore the bag open, and let the Turtle out.

The Woodpecker flew down from her nest, and the Deer said to them: "You two friends saved my life, but if we stay here talking, the hunter will find us, and we may not get away. So do you, Friend Woodpecker, fly away. And you, Friend Turtle, dive into the water. I will hide in the forest."

The hunter did come back, but neither the Deer, nor the Turtle, nor the Woodpecker was to be seen. He found his torn bag, and picking that up he went back to his home.

The three friends lived together all the rest of their lives.

If you use Facebook or Google+ & enjoyed The Woodpecker, Turtle And Deer, please tell your friends and let us know to find more like it for you!