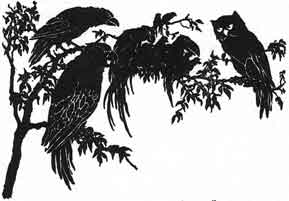 Why is it that Crows torment the Owls as they sleep in the daytime? For the same reason that the Owls try to kill the Crows while they sleep at night.

Listen to a tale of long ago and then you will see why.

"Among men there is a king, and among the beasts, and the fish have one, too; but we birds have none. We ought to have a king. Let us choose one now."

And so the birds talked the matter over and at last they all said, "Let us have the Owl for our king."

No, not all, for one old Crow rose up and said, "For my part, I don't want the Owl to be our king. Look at him now while you are all crying that you want him for your king. See how sour he looks right now. If that's the cross look he wears when he is happy, how will he look when he is angry? I, for one, want no such sour-looking king!"

Then the Crow flew up into the air crying, "I don't like it! I don't like it!" The Owl rose and followed him. From that time on the Crows and the Owls have been enemies. The birds chose a Turtle Dove to be their king, and then flew to their homes.

If you use Facebook or Google+ & enjoyed Why The Owl Is Not King Of The Birds, please tell your friends and let us know to find more like it for you!