Once upon a time a merchant, with his goods packed in many carts, came to a desert. He was on his way to the country on the other side of the desert.

The sun shone on the fine sand, making it as hot as the top of a stove. No man could walk on it in the sunlight. But at night, after the sun went down, the sand cooled, and then men could travel upon it.

So the merchant waited until after dark, and then set out. Besides the goods that he was going to sell, he took jars of water and of rice, and firewood, so that the rice could be cooked.

All night long he and his men rode on and on. One man was the pilot. He rode first, for he knew the stars, and by them he guided the drivers. 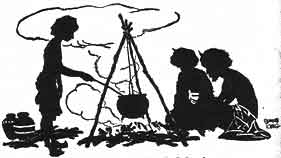 At daybreak they stopped and camped. They unyoked the oxen, and fed them. They built fires and cooked the rice. Then they spread a great awning over all the carts and the oxen, and the men lay down under it to rest until sunset.

In the early evening, they again built fires and cooked rice. After supper, they folded the awning and put it away. They yoked the oxen, and, as soon as the sand was cool, they started again on their journey across the desert.

Night after night they traveled in this way, resting during the heat of the day. At last one morning the pilot said: "In one more night we shall get out of the sand." The men were glad to hear this, for they were tired.

After supper that night the merchant said: "You may as well throw away nearly all the water and the firewood. By to-morrow we shall be in the city. Yoke the oxen and start on."

Then the pilot took his place at the head of the line. But, instead of sitting up and guiding the drivers, he lay down in the wagon on the cushions. Soon he was fast asleep, because he had not slept for many nights, and the light had been so strong in the daytime that he had not slept well then.

All night long the oxen went on. Near daybreak, the pilot awoke and looked at the last stars fading in the light. "Halt!" he called to the drivers. "We are in the same place where we were yesterday. The oxen must have turned about while I slept."

They unyoked the oxen, but there was no water for them to drink. They had thrown away the water that was left the night before. So the men spread the awning over the carts, and the oxen lay down, tired and thirsty. The men, too, lay down saying, "The wood and water are gone--we are lost."

But the merchant said to himself, "This is no time for me to sleep. I must find water. The oxen cannot go on if they do not have water to drink. The men must have water. They cannot cook the rice unless they have water. If I give up, we shall all be lost!" 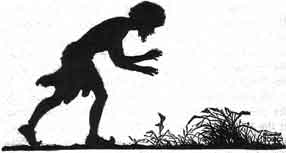 On and on he walked, keeping close watch of the ground. At last he saw a tuft of grass. "There must be water somewhere below, or that grass would not be there," he said.

He ran back, shouting to the men, "Bring the spade and the hammer!"

They jumped up, and ran with him to the spot where the grass grew. They began to dig, and by and by they struck a rock and could dig no further. Then the merchant jumped down into the hole they had dug, and put his ear to the rock. "I hear water running under this rock," he called to them. "We must not give up!" Then the merchant came up out of the hole and said to a serving-lad: "My boy, if you give up we are lost! You go down and try!"

The boy stood up straight and raised the hammer high above his head and hit the rock as hard as ever he could. He would not give in. They must be saved. Down came the hammer. This time the rock broke. And the boy had hardly time to get out of the well before it was full of cool water. The men drank as if they never could get enough, and then they watered the oxen, and bathed.

Then they split up their extra yokes and axles, and built a fire, and cooked their rice. Feeling better, they rested through the day. They set up a flag on the well for travelers to see.

At sundown, they started on again, and the next morning reached the city, where they sold the goods, and then returned home.

If you use Facebook or Google+ & enjoyed The Sandy Road, please tell your friends and let us know to find more like it for you!