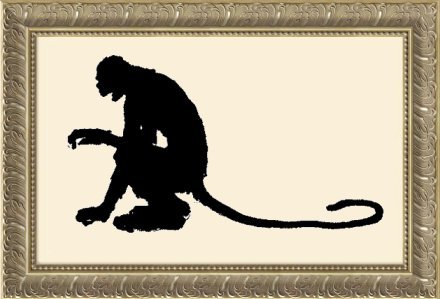 Once upon a time the king of a large and rich country gathered together his army to take a faraway little country. The king and his soldiers marched all morning long and then went into camp in the forest.

When they fed the horses they gave them some peas to eat. One of the Monkeys living in the forest saw the peas and jumped down to get some of them. He filled his mouth and hands with them, and up into the tree he went again, and sat down to eat the peas.

As he sat there eating the peas, one pea fell from his hand to the ground. At once the greedy Monkey dropped all the peas he had in his hands, and ran down to hunt for the lost pea. But he could not find that one pea. He climbed up into his tree again, and sat still looking very glum. "To get more, I threw away what I had," he said to himself.

The king had watched the Monkey, and he said to himself: "I will not be like this foolish Monkey, who lost much to gain a little. I will go back to my own country and enjoy what I now have."

So he and his men marched back home.

If you use Facebook or Google+ & enjoyed The Penny-Wise Monkey, please tell your friends and let us know to find more like it for you!