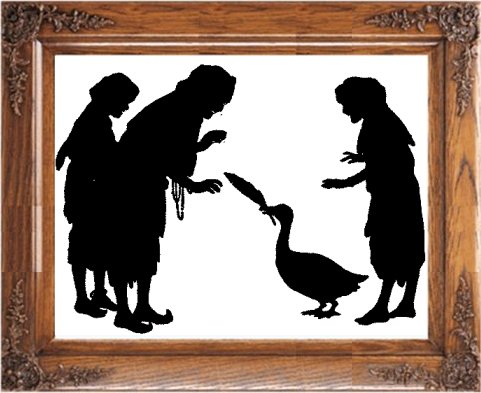 Once upon a time there was a Goose who had beautiful golden feathers. Not far away from this Goose lived a poor, a very poor woman, who had two daughters. The Goose saw that they had a hard time to get along and said he to himself:

"If I give them one after another of my golden feathers, the mother can sell them, and with the money they bring she and her daughters can then live in comfort."

So away the Goose flew to the poor woman's house.

Seeing the Goose, the woman said: "Why do you come here? We have nothing to give you."

"But I have something to give you," said the Goose. "I will give my feathers, one by one, and you can sell them for enough so that you and your daughters can live in comfort."

So saying the Goose gave her one of his feathers, and then flew away. From time to time he came back, each time leaving another feather.

The mother and her daughters sold the beautiful feathers for enough money to keep them in comfort. But one day the mother said to her daughters: "Let us not trust this Goose. Some day he may fly away and never come back. Then we should be poor again. Let us get all of his feathers the very next time he comes."

The daughters said: "This will hurt the Goose. We will not do such a thing." 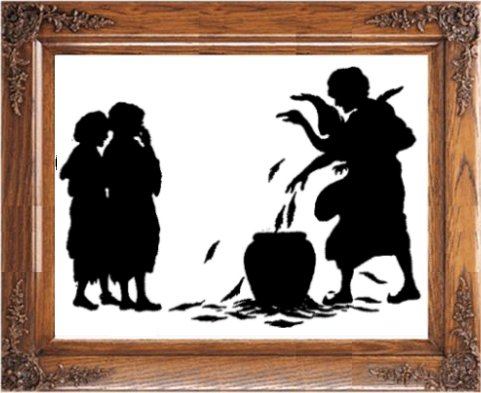 But the mother was greedy. The next time the Golden Goose came she took hold of him with both hands, and pulled out every one of his feathers.

Now the Golden Goose has strange feathers. If his feathers are plucked out against his wish, they no longer remain golden but turn white and are of no more value than chicken-feathers. The new ones that come in are not golden, but plain white.

As time went on his feathers grew again, and then he flew away to his home and never came back again.

If you use Facebook or Google+ & enjoyed Golden Goose, please tell your friends and let us know to find more like it for you!