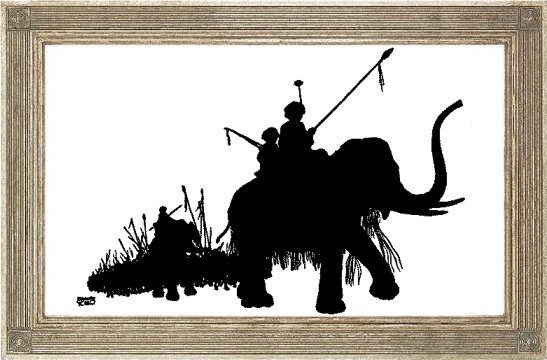 Once upon a time there was a little man with a crooked back who was called the wise little bowman because he used his bow and arrow so very well. This crooked little man said to himself: "If I go to the king and ask him to let me join his army, he's sure to ask what a little man like me is good for. I must find some great big man who will take me as his page, and ask the king to take us." So the little bowman went about the city looking for a big man.

One day he saw a big, strong man digging a ditch "What makes a fine big man like you do such work?" asked the little man.

"I do this work because I can earn a living in no other way," said the big man.

"Dig no more," said the bowman. "There is in this whole country no such bowman as I am; but no king would let me join his army because I am such a little man. I want you to ask the king to let you join the army. He will take you because you are big and strong. I will do the work that you are given to do, and we will divide the pay. In this way we shall both of us earn a good living. Will you come with me and do as I tell you?" asked the little bowman.

So together they set out to go to the king. By and by they came to the gates of the palace, and sent word to the king that a wonderful bowman was there. The king sent for the bowman to come before him. Both the big man and the little man went in and, bowing, stood before the king.

The king looked at the big man and asked, "What brings you here?"

"Who is the little man with you?" asked the king.

"What pay do you want?" asked the king.

"A thousand pieces a month for me and my page, O King," said the big man.

"I will take you and your page," said the king.

So the big man and the little bowman joined the king's army.

Now in those days there was a tiger in the forest who had carried off many people. The king sent for the big man and told him to kill that tiger.

The king was glad to be rid of the tiger, and gave the big man rich gifts and praised him.

Another day word came that a buffalo was running up and down a certain road. The king told the big man to go and kill that buffalo. The big man and the little man went to the road, and soon the little man shot the buffalo. When they both went back to the king, he gave a bag of money to the big man.

But a few days later a king from a far country marched upon the city and sent a message to its king saying, "Give up your country, or do battle."

The king at once sent his army. The big man was armed and mounted on a war-elephant. But the little bowman knew that the big man could not shoot, so he took his bow and seated himself behind the big man.

Then the war-elephant, at the head of the army, went out of the city. At the first beat of the drums, the big man shook with fear. "Hold on tight," said the little bowman. "If you fall off now, you will be killed. You need not be afraid; I am here."

But the big man was so afraid that he slipped down off the war-elephant's back, and ran back into the city. He did not stop until he reached his home.

"And now to win!" said the little bowman, as he drove the war-elephant into the fight. The army broke into the camp of the king that came from afar, and drove him back to his own country. Then the little bowman led the army back into the city. The king and all the people called him "the brave little bowman." The king made him the chief of the army, giving him rich gifts.

If you use Facebook or Google+ & enjoyed The Brave Little Bowman, please tell your friends and let us know to find more like it for you!