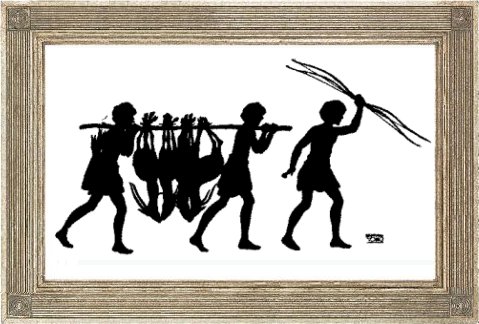 Two Deer named Beauty and Brownie lived with their father and mother and great herds of Deer in a forest. One day their father called them to him and said: "The Deer in the forest are always in danger when the corn is ripening in the fields. It will be best for you to go away for a while, and you must each take your own herd of Deer with you."

"What is the danger, Father?" they asked.

"When the Deer go into the fields to eat the corn they get caught in the traps the men set there," the father said. "Many Deer are caught in these traps every year."

"Shall you go away with us?" Brownie said.

"No, your mother and I, and some of the other old Deer will stay here in the forest," said the father. "There will be food enough for us, but there is not enough for you and your herds. You must lead your herds up into the high hills where there is plenty of food for you, and stay there until the crops are all cut. Then you can bring your herds back here. But you must be careful.

"You must travel by night, because the hunters will see you if you go by day. And you must not take your herd near the villages where hunters live."

So Beauty and Brownie and their herds set out. Beauty traveled at night and did not go near any villages, and at last brought his herd safely to the high hills. Not a single Deer did Beauty lose.

But Brownie forgot what his father had said. Early each morning he started off with his herd, going along all through the day. When he saw a village, he led his herd right past it. Again and again hunters saw the herd, and they killed many, many of the Deer in Brownie's herd.

When crops had been cut, the Deer started back to the forest. Beauty led all his herd back, but stupid Brownie traveled in the daytime, and again he took his herd past the villages. When he reached the forest only a few were left of all Brownie's herd.

The Elephant-keeper did not care for the Dog, and he did want some money just then. So he asked a fair price, and the fanner paid it and took the Dog away to the country.

If you use Facebook or Google+ & enjoyed Beauty And Brownie, please tell your friends and let us know to find more like it for you!