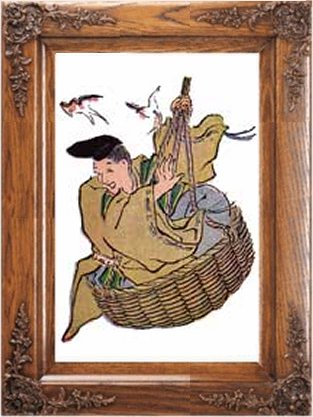 The prince who was to find the shell hid in the swallows' nest was a very proud and lordly man. When he returned from the visit to the princess he called his head servant to him.

"Do you know anything about the shell the swallows keep hidden in their nests?" he asked.

The man stared. "The shell in the swallows' nests? Which nests?"

"Perhaps the gardener would know more about it. May I ask him?" So he called the gardener.

"Do you know where the shell is which the swallows keep hidden in their nest?" he asked the gardener. "No, I have not had it. Did you want it? I'll ask the water carrier if he has seen it." So he called the water carrier.

The water carrier said he knew nothing about it, but called another man. This man called another, and so on, until all the servants had been called. No one had ever seen the shell.

At last they asked the children. One little boy thought that he had seen one once. He had been up in the roof of the kitchen looking for swallows' eggs, and thought he saw a shell in one of the nests. Perhaps that was the shell the prince wished.

The prince was delighted and ordered his men to go and search the swallow nests in the roof of the kitchen. They went and looked, but said they could not reach the nests, for they were in the very top of the roof.

"But you must find a way to reach them," roared the prince, "Search every nest and do not come back until you have."

The men spent three days trying to climb up, but failed. At last they found that with a rope and a basket a man could be drawn up so that he could look into the nests. They searched and searched, but found no shell.

At last the prince grew impatient and went down to the kitchen himself to see what they were doing.

"Have you found the shell yet?" he asked.

"No, there is no shell there," the men answered.

Then the prince was furious and insisted on being pulled up himself to see. The men tried to persuade him not to do it, but he sprang into the basket and commanded them to pull him up at once.

The men dared not refuse, so they pulled him up. When he reached the nests the swallows began to peck at him, for they did not care to have all their eggs broken and their nests torn to pieces.

They flew at him so furiously that they nearly pecked his eyes out.

"Help, help!" he screamed. The men began to lower the basket. Just then he remembered the shell and thrust his hand into a nest. There was something hard there. He seized it, but lost his balance and came tumbling down. Instead of coming down in the basket he came down thump on the hot stove.

His men lifted him off as soon as possible, but he was badly burned and bruised. In his hand he held a shell, it is true, but it was a bit of eggshell, and the egg was spattered all over his hand and face.

He decided that this was all he wished of the shell from the swallows' nest.

By the time his burns and bruises were healed he had forgotten all about the princess, and he never climbed up to peep into the swallows' nests again.

If you use Facebook or Google+ & enjoyed The Shell In The Swallows' Nest, please tell your friends and let us know to find more like it for you!