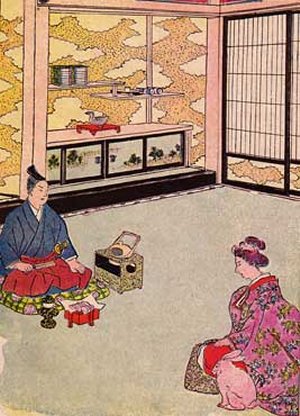 Near Tajima, on the north coast of Japan, lived a mighty prince who had eighty-one sons. Eighty of them were bold, proud men, and hated the youngest brother, the eighty-first.

This youngest brother was kind and good to everyone. His elder brothers said: "That is not the way for a prince to act. You treat people as though you were the commonest wood-cutter, and not a cousin of the Emperor himself."

But in spite of all they said the youngest prince was just as kind to the people as ever, so his brothers hated him the more.

Now there was a beautiful princess in Inaba whom everyone wished to see. The eighty, brothers said: "Let us go and see this wonderful princess." So they started off, two by two. What a procession they made!

They took their youngest brother, the eighty-first, along to carry their bundles and wait on them, but he had to walk behind.

Over the hills and through the valleys they went until they came to Cape Keta.

Here they found a poor little hare without a scrap of fur on his body. Every bit had been pulled off, and he lay there with nothing to protect him from the hot sun.

"Oh, good friends," cried the poor hare to the eighty brothers, "I am nearly dying. Can you tell me what to do to make my fur grow again?"

The proud, cruel brothers only laughed at the poor hare, and answered: "You wish your hair to grow? Well, you just down and bathe in the salt water of the ocean, and then go and lie on a high rock where the sun can shine on you, and the wind can blow on you." Then they went on, laughing.

The hare did as they told him do. Oh, how the salt water stung his poor skin! Oh, how the sun and wind burned and cracked it!

He lay there groaning and crying with pain. Suddenly he heard some one calling: "What is the matter? Do you want help?"

"Oh, I am dying!" answered the hare. Then he heard some one climbing up the rocks, and in a moment more the eighty-first brother stood by him.

The poor young prince had so many bundles that he could hardly walk. "What is the matter with you? Why are you groaning so?" he asked the hare.

"It is a long story," said the hare, "and when I am through perhaps you will think I deserve what I now suffer, but I will tell you all. "

"I was on the island of Oki, and I wished to get over to this country, but I had no boat. At last I thought of a plan. I went down to the seashore and waited until I saw a crocodile raise its head above the water.

"Then I called, 'Croco-croco-crocodile, come here, I wish to talk with you.' He came up close, and I said, 'How many crocodiles are there in the sea?'

"'There are more crocodiles in the sea than there are buttons on my back,' said the crocodile.

"'But there are not so many of you as there are of us,' I said. 'There are more hares on the land than there are hairs on my back.'

"'All right,' I answered. 'You crocodiles lie here in a row from this land to Cape Keta and I will run across on your heads and count you as I go. Then we will count the hares and see which are the most.'

"So the crocodiles all came and lay in a row, and the farthest one just touched Cape Keta.

"I sprang on their backs and ran as fast as I could to Cape Keta, counting as I ran.

"How foolish I was! Just as I reached the last crocodile I said, 'You silly things! Do you think I care how many there are of you? You have made me a good bridge; that is all I wished. Thank you for it. Good-by.'

"The last crocodile caught me when I said that, and pulled every hair off my body.

" 'We should like to know how many hares there are,' he said, 'so we will just count these hairs and see.' At that the whole row of crocodiles opened their great mouths and laughed."

"Well, it served you right for being so tricky, but go on with your story," said the eighty-first prince.

"Yes, I know it served me right for what I had done, and I shall never do that again," said the poor hare. "But after all my fur was gone, I was lying here crying when eighty princes came along.

"They laughed at me for my baldness, and told me to bathe in the salt water of the ocean and then lie in the sun and wind. I did so, and see how I suffer!"

The eighty-first prince felt very sorry for the poor hare, so he carried him to a spring of clear water.

"Bathe in this," he said, "and that will wash off all the salt. I will bruise some leaves, and the juice from them will make your fur grow again."

When this was done the hare felt as well as ever, and his fur began growing again.

Then the prince picked up his bundles and started on to catch up with his brothers.

When at last the poor tired boy reached Inaba he found his brothers already there, and very cross indeed.

The beautiful princess did not care to see them and they scolded the eighty-first prince as though it had been his fault.

They were just about to return home when a messenger came from the princess.

"Ah!" cried the first prince, "she wishes to see me; she is sending for me, I know."

The third prince fairly screamed: "You silly things! Don't you know I am the one she wants? I am far handsomer than any one of you. Of course she wants me."

The messenger waited until they were still at last, and then said: "Her Majesty, the Princess of Inaba, wishes the burden-bearer for the eighty princes to come."

The eighty-first prince laid down his burdens and followed the messenger.

He led him to the palace and into a room where sat the most beautiful woman he had ever seen. Beside her stood a hare whose fur was just beginning to grow.

The princess said to him: "My friend, I sent for you to thank you for what you did for my pet hare. He has just come to tell me about it. How does it happen that one so kind as you is only a servant?"

Then the eighty-first prince told her: "I am not a servant, O most beautiful Princess! My eighty brothers were coming to see you and made me walk behind and carry the burdens, but I'm just as much a prince as they."

"How can I repay you for all you did for my poor hare? Ask anything you wish and I will give it to you."

"The one thing I wish most of all is to live here with you," said the prince.

So they were the prince and princess of that land, and the hare was their companion.

As for the eighty brothers, they found they might as well go home first as last, and this time they had to carry their own burdens.

If you use Facebook or Google+ & enjoyed The Eighty-One Brothers, please tell your friends and let us know to find more like it for you!