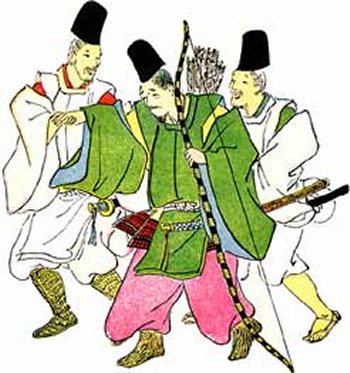 Prince Lofty was the one who was to go to bring the dragon jewel. He was a great boaster and a great coward.

Of course he intended to get the dragon jewel, but you may be sure he did not propose to take the trouble himself.

He called together a great crowd of his servants and soldiers and told them what he wanted. He gave them plenty of money for their needs and told them to be gone and not to show themselves again until they brought him the dragon jewel.

The men took the money quickly enough and went away, but not to find the dragon jewel. What did they care about it?

They did not believe that there was such a thing, and if there was, they were very sure the old dragon was very welcome to keep it. They did not care to try taking it away from him.

Meanwhile Prince Lofty was having a palace built for the princess. He did not doubt for one moment that he would win her, so he would have a house ready to receive her.

There had never been so beautiful a palace in that part of the country before. All the wood was lacquered, carved, or inlaid with gold and precious stones. The walls were hung with silks painted by the finest artists.

Then he waited for his men to bring the jewel, but they did not come. He waited a whole year. Then he was angry and decided that he would go himself.

He called together a few of his servants who were left and told them to fit up a boat.

The servants were frightened when they knew what he was going to seek. They begged him not to do it, for fear that the dragon would destroy them.

"Cowards!" cried Prince Lofty. "Cowards, watch me. Learn how to be brave from me. Do you think I will be afraid of any dragon? "

So they started, and all went well for two or three days. "Don't you see that the dragon is afraid of me?" boasted the prince.

That evening a fierce storm came up. The boat rocked and dipped. The great waves broke in foam over the side of the boat and they were all wet through. The rain poured down in torrents. The lightning flashed and the thunder growled and roared.

Brave Prince Lofty was sure the boat would upset. If they did not drown he knew that the lightning would kill them.

He huddled in the bottom of the boat seasick and frightened. He begged the pilot and the other men to save him. "What did you ever bring me to this place for?" he cried. "Did you wish to kill me? Is this all you care for the life of your great prince? Get me out of this at once or I shall shoot every one of you with my great bow."

The men could hardly keep from laughing, for it was only on his account they had set sail at all. As for shooting them, they knew he could not lift an arrow, much less pull the bow.

The pilot answered: "My prince, it must be the dragon who sends this storm. He has heard you say that you will kill him and take the jewel from his neck. You had better promise him that you will not hurt him, and then perhaps he will let us live."

Prince Lofty was willing to promise anything to have the storm stop, so he vowed that he would never touch the dragon, not even the least hair on the tip of his tail.

After a while the storm died down, the lightning ceased, and the waves were still. Prince Lofty was too sick, however, to know what happened until at last they came to a land. They lifted him out of the boat and laid him under a tree.

When at last he felt firm ground under him he wept aloud, and vowed that now he had something solid to rest on he would never leave it.

He was on an island far from Japan, but he would not return on a boat, not for a hundred princesses. So he stayed there the rest of his life.

The beautiful palace which he built for the princess had no one to live in it but the bats and owls, and sometimes a stray mouse or two.

If you use Facebook or Google+ & enjoyed The Dragon Jewel, please tell your friends and let us know to find more like it for you!