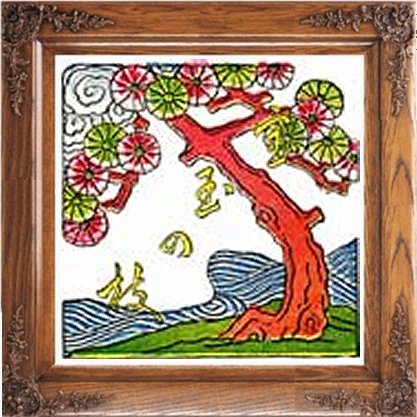 The prince who was going for the branch of the jewel tree was very cunning and very rich.

However, he said that he was going in search of it. He said good-by to all his friends and went down to the seashore. There he dismissed all but four of his servants, for he said he wished to go quietly.

It was three years before anybody saw or heard of him again. Then he suddenly appeared before the princess, bearing a wonderful branch of gold with blossoms and leaves of all colored jewels.

She asked the prince to tell of his journey. He made a bow and began his story.

"I sailed away from here," he said, "not knowing where to go. I let the wind and the waves carry me where they wished.

"We passed many beautiful cities and strange countries. We saw the great sea dragons lying on the water, sleeping as the waves rocked them up and down. We saw the sea serpents playing in the bottom of the ocean. We saw strange birds, with bodies like animals.

"Sometimes we sailed on with a gentle wind, and sometimes we floated with no breeze to move us for days and weeks.

"At times fierce storms arose. The waves rose mountain high. Wild winds whipped away our sails. We were driven and hurled to unknown lands.

"Again we saw great rocks on which the waves lashed themselves in showers of white foam.

"For days and weeks we had no food to eat and no water to drink. The great green waves lapping around us made us long for water all the more, but we could not drink the salt sea water.

"At last, just when I thought we would surely die, I saw a great mountain lifting its dark head out of the morning sea. We hastened to it. It was the floating mountain of Horai.

"We sailed around it several times before I could find a place to land. At last I saw a small cove and anchored there. When I went on shore there stood a most beautiful girl with a basket of food. She set down the basket and immediately disappeared.

"I was nearly starving, but I did not touch the food until I had broken off a branch from one of the jeweled golden trees, to bring home to you. Then I returned to my ship.

"The men were thankful for the food, so we feasted all day. In the morning, when the sun rose, the mountain had gone.

"A brisk wind was blowing, and in a few days we were home again. I came straight from the ship to bring you this."

Tears stood in the eyes of the princess to think of how he had suffered to bring her that jewel branch.

Just then three men came asking for the prince. "Could you pay us now?" they asked. The prince started to drive them away, but the princess told them to stay.

"What is it you wish?" she asked them.

"For three years we have been working to make this beautiful golden branch. Now that it is finished we want our pay."

"Where have you been these three years?"

"In a little house down by the seashore. "

"Has the prince been with you?"

The prince was angry and ashamed. He knew that the princess would never believe in him again, so he went far away into another country to live.

The princess gave the jewel branch to the workmen to pay them for their years of work, so they went away happy, and praising the princess for her kindness

If you use Facebook or Google+ & enjoyed The Branch Of The Jewel Tree, please tell your friends and let us know to find more like it for you!