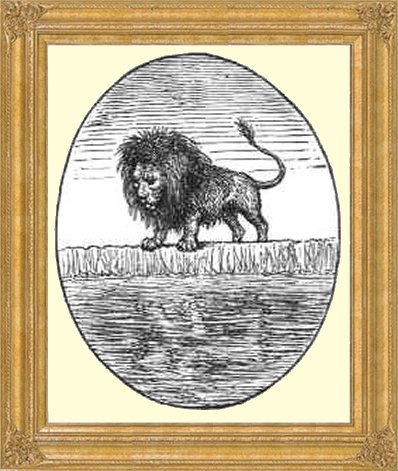 Once upon a time, in a great jungle, there lived a great Lion. He was Rajah of all the country round; and every day he used to leave his den, in the deepest shadow of the rocks, and roar with a loud, angry voice; and when he roared, the other animals in the jungle, who were all his subjects, got very much frightened, and ran here and there; and Singh Rajah would pounce upon them, and kill them, and gobble them up for his dinner.

This went on for a long, long time, until, at last, there were no living creatures left in the jungle but two little jackals,--a Rajah Jackal and a Ranee Jackal--husband and wife.

A very hard time of it the poor little Jackals had, running this way and that to escape the terrible Singh Rajah; and every day the little Ranee Jackal would say to her husband, 'I am afraid he will catch us to-day,--do you hear how he is roaring? Oh dear oh dear!' And he would answer her, 'Never fear; I will take care of you. Let us run on a mile or two. Come, come,--quick, quick, quick!' And they would both run away as fast as they could.

After some time spent in this way, they found, however, one fine day, that the Lion was so close upon them that they could not escape. Then the little Ranee Jackal said, 'Husband, husband! I feel very frightened. The Singh Rajah is so angry he will certainly kill us at once. What can we do?' But he answered, 'Cheer up; we can save ourselves yet. Come, and I'll show you how we may manage it.'

So what did these cunning little Jackals do, but they went to the great Lion's den; and when he saw them coming, he began to roar and shake his mane, and he said, 'You little wretches, come and be eaten at once I have had no dinner for three whole days, and all that time I have been running over hill and dale to find you. Ro-a-ar! Ro-a-ar! Come and be eaten, I say!' and he lashed his tail and gnashed his teeth, and looked very terrible indeed. Then the Jackal Rajah, creeping quite close up to him, said, '0 great Singh Rajah, we all know you are our master, and we would have come at your bidding long ago; but indeed, sir, there is a much bigger Rajah even than you in this jungle, and he tried to catch hold of us and eat us up, and frightened us so much that we were obliged to run away.'

'What do you mean?' growled Singh Rajah. 'There is no King in this jungle but me!' 'Ah, Sire,' answered the Jackal, 'in truth one would think so, for you are very dreadful. Your very voice is death. But it is as we say, for we, with our own eyes, have seen one with whom you could not compete; whose equal you can no more be than we are yours; whose face is as flaming fire, his step as thunder, and his power supreme.' 'It is impossible!' interrupted the old Lion; 'but show me this Rajah of whom you speak so much, that I may destroy him instantly!'

Then the little Jackals ran on before him until they reached a great well, and, pointing down to his own reflection in the water, they said, 'See, Sire, there lives the terrible King of whom we spoke.' When Singh Rajah looked down the well he became very angry, for he thought he saw another Lion there. He roared and shook his great mane, and the shadow Lion shook his, and looked terribly defiant. At last, beside himself with rage at the insolence of his opponent, Singh Rajah sprang down to kill him at once, but no other Lion was there--only the treacherous reflection; and the sides of the well were so steep that he could not get out again, to punish the two Jackals, who peeped over the top. After struggling for some time in the deep water, he sank to rise no more. And the little Jackals threw stones down upon him from above, and danced round and round the well, singing, 'Ao! Ao! Ao! Ao! The King of the Forest is dead, is dead We have killed the great Lion who would have killed us! Ao! Ao! Ao! Ao! Ring-a-ting--ding-a-ting! Ring-a-ting--ding-a-ting! Ao! Ao l Ao!'

If you use Facebook or Google+ & enjoyed Singh Rajah And The Cunning Little Jackals, please tell your friends and let us know to find more like it for you!