The boy Yannik lived in the woods and fields. That was long, long ago, when within the rocky shores of Finistere there were few houses or villages and even fewer cultivated pastures. In those days wild reaches of marsh and woodland were haunted by the will-o-the-wisp, bears, and savage wolves. Then elves danced on the lonely heaths and men had strange visions.

But Yannik was growing as free as a redbreast on a branch, and, like the redbreast, wherever he went the child seemed to bring joy and fair fortune. But no song like the redbreast's carol ever came from between his lips.

When the good people of the country gave Yannik a pair of wooden shoes he smiled a radiant smile. Sometimes they gave him a ripe apple or buckwheat cakes, but a smile was his only answer. For Yannik was dumb.

Who was he? Whence came he? 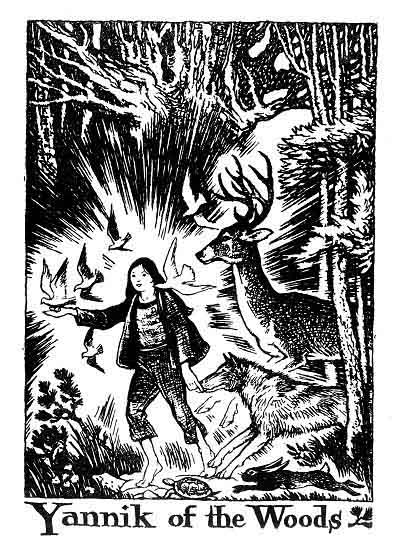 Yannik was like one of these, a presence, a light, a smile. Everyone welcomed him, but there was none who could keep him inside cottage walls. Though she had softly cradled him at nightfall, at dawn when the farmer's wife arose she saw by the ruddy firelight that Yannik's bed was empty. No one had heard him go, but on the fallen snow footsteps could be traced leading to the forest where Yannik lived with the birds and the beasts he loved.

The bears knew him and the fierce wolf thrust its confiding muzzle in Yannik's hand. The birds perched upon his shoulder and the turtle dove nestled in his bosom. All creatures of the forest guarded him as he roamed within its pathless depths.

"He is a fairy child," said the women to each other. And the men called him the Fol Gout, which means "the mad thing of the woods."

Yet when the choir sang in the tiny church Yannik always crept in and listened with so rapt a face, with clasped hands, and such shining eyes that the white-haired priest tried to persuade him to remain and learn a word or two of man's speech.

Yannik listened and smiled his radiant smile but no word ever crossed his lips until at length one summer day as he left the heat of the fields for the soft, cool shade of the church he heard the people chanting a hymn of praise. Their voices seemed to rise toward the glowing Heaven.

It was a feast day and white-robed children were singing in tones as pure and clear as heavenly harps:

Yannik paused upon the door-sill, then went slowly up the aisle holding his hands before him as a blind man who gropes his way. Awed, the children hushed their song as they watched Yannik reach the foot of the high altar and, standing near the priest raise his hands and sing:

From that day Yannik, the fairy child, Yannik, the mad thing of the woods, became one voice of praise. Alone in the woods, in the farmhouse kitchens, in the church, or going from door to door with the white-haired priest the child sang ever:

To these words no other words were ever added.

One summer evening as the sun was setting and the peasants were coming home, weary after the day's toil, and the blue smoke was slowly rising in the air, the music of silver-toned bells filled the sky and it seemed as if the bells were pealing:

"It is the song of Yannik, the dumb boy," said the people to each other, awestruck. "The Heavens are chanting it for him."

The next morning when the priest went down to the church door he saw Yannik lying across the threshold. The old man thought he was sleeping and spoke to him tenderly. But as he stooped over him he saw the boy's sweet smile frozen on his stiffened lips. The fairy child, Yannik, was dead.

And so on that very spot they built the church of Fol Gout, strong and stately as a knight's spear, but delicate as the lace coif of a fair lady.

And here it is that mothers of children whose lips are sealed, like Yannik's, bring them to be blessed in the hope that they too then will speak only words of praise and glory, and never words of hatred or of anger. 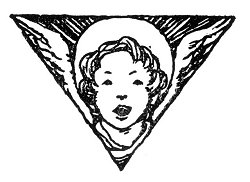 If you use Facebook or Google+ & enjoyed Yannik The Fairy Child, please tell your friends and let us know to find more like it for you!