How sweetly the children are sleeping in their box-beds. The yellow dog is snoring on the warm hearth-stone, and the flickering firelight comes and goes over grandfather's ancient chair.

Midnight is striking at the church of Saint Michael of the Great Beach, midnight of this blessed Whitsuntide! It is now, good people, that you must say under your breath prayers for the souls of those you have loved. It is the hour when holy folk lay their heads on their chaff-pillows, thankful for the goods that God has given them and then fall asleep beside their slumbering children.

But Perik Skearn had no children; he was a daring young spark, and all alone in the world. He had seen the nobles of thereabouts coming to festivals of the parish, and he was envious of their horses with their silver-set bridle reins. He was jealous of their velvet coats and their silk stockings with their many-colored clocks. He longed to be as rich as the lords; to have a seat in church with a red leather cushion, and take a lovely heiress to the Pardons, sitting behind him on the pillion, one arm slipped round his waist.

That is why, this Whitsuntide, Perik was pacing up and down the Great Beach at the foot of the dunes of Saint Efflam at an hour when all good folk were sleeping in their beds. For Perik was dreaming of beautiful maidens and wealth and gold, and his longings were as many as the nests of the swallows on the wild sea-reefs.

The waves were sighing sadly on the dark horizon, the crabs were silently gnawing drowned men's bones, the wind was whistling eerily amongst the rocks as whistle the sea-robbers of the Great Beach,--but Skearn still paced up and down the sands.

He gazed upward at the cliffs, saying over and over in his mind what the bent and wrinkled beggar of the Cross of Yar had told him. In all four corners of the land of Brittany no sage was to be found with knowledge like unto this ancient beggar's. He could narrate what happened when our oldest oaks were acorns, and our hoary ravens unhatched eggs.

Now the beggar had informed Skearn that on the spot where is now the dune of Saint Efflam, was in olden times, a mighty town. Its fleets covered the sea and it was ruled over by a king whose scepter was a hazel wand with which he transformed everything as he willed. But it was decreed by Heaven that the city and the king should be punished for their crimes, so that one day, by Divine command, the shores rose up like floods of boiling water and engulfed the evil doers. Yet each year, at Whitsuntide, at the first stroke of midnight, a passage opens in the mountain and permits him who dares to enter to reach the king's abode. In the innermost chamber of this entombed palace is hanging the hazel wand which gives the holder magic power,--but he must hasten who wishes to possess it for, as the last stroke of midnight dies away, the mountain closes and will crush the unwary intruder. 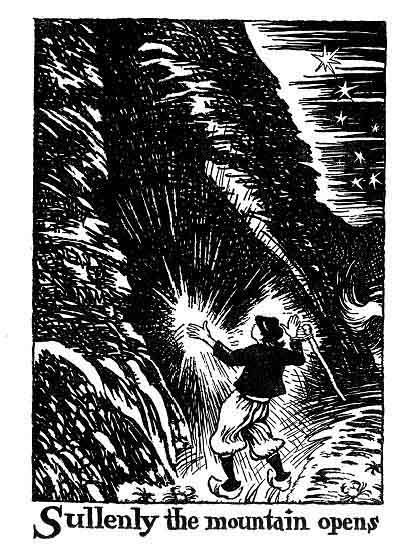 Skearn had treasured the story of the bent beggar of Yar, and that is why this Whitsuntide he feverishly paced the sands of the Great Beach. At last, from Saint Michael's steeple, the first stroke of midnight sounded. Skearn started! . . . In the starlight he gazed at the granite cliff which forms the mountain wall and saw it open sullenly as might the jaws of some fell dragon awakening from slumber. Then, fixing the leathern strap of his club firmly around his wrist, he rushed forward into the jagged cliff. The cavernous interior was ghostily lighted as though by those strange rays that shine at night in graveyards. Half terrified, half eager, Skearn rushed onward through black leaping shadows and arrived at the threshold of a mighty palace, the like of which no man now living ever has beheld. Strangely it loomed within that eerie light.

The first chamber that he entered was crammed with cupboards in each of which were heaped up silver coins, as plentiful as are the grains of corn in corn-bins after the gathering, of the harvest. But Skearn knew that better things were waiting, and pressed on as the sixth stroke of midnight rang.

He came to a second chamber. Here the cupboards were overflowing with gold even as mangers overflow with flowering grass in June. Perik loved gold, but he knew still richer treasure was to be had and he hastened onward as the seventh stroke of midnight pealed.

The third room that Perik entered was full of baskets where pearls streamed like milk in the stone jars at the beginning of Spring. He longed to cram his pockets, but dashed on his way as the eighth stroke tolled.

The fourth room was lighted by coffers full of diamonds, throwing out more glory than the bonfires of dry gorse on the hillsides at Saint John's Eve. Skearn was dazzled. He paused an instant, then ran to the last room as he heard the ninth stroke ring. There he drew up suddenly, breathless with admiration. In front of the hazel scepter, hanging in a halo of light, were standing a hundred maidens, each lovely enough to melt a hundred hearts.

Each beckoned to Skearn with one fair hand whilst with the other offered a goblet that flashed as though with magic fire. Skearn, who had resisted the silver, gold, the pearls and diamonds, now stood spellbound. His heart pounded against his ribs. His gaze was fixed upon the wondrous beauty of the maidens.

The tenth stroke of midnight pealed. Skearn heard it not. The eleventh rang out and he still was motionless. And now the twelfth stroke tolled, as ominous as the gunshot of some ill-fated ship lost upon the rocks.

Perik, terrified, turned at last to flee, but it was too late. The mountain's jaws had closed once more; the hundred maidens had turned into a hundred statues of granite, and all was swallowed up in darkness.

That is how our forefathers told the story of Perik Skearn. Now you know the fate of that deluded lad who opened his heart too readily to avarice and temptation. It is wiser to be content with the blessings that good Heaven grants than to turn one's longings to unbridled dreams of treasure.

If you use Facebook or Google+ & enjoyed The Hazel Scepter, please tell your friends and let us know to find more like it for you!