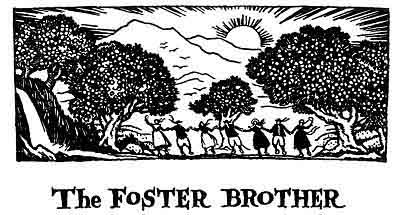 The loveliest girl of noble race in all the country round was a maiden of eighteen summers whose name was Gwennola. The old lord of the manor, her father, was dead. Her two sisters, likewise, as well as her own sweet mother had passed beyond this world; all of her family were gone except, alas, her stepmother.

It was sad to see the lovely Gwennola, so sweet and winsome a maid, weeping bitterly on the doorstep of the manor house. Her eyes were fixed on the sea watching for the return of her foster brother's ship. This hope was her only comfort, and she had waited long. Her eyes never left the far horizon seeking for the sail of her foster brother's vessel. It was six years now since he had sailed away from home.

Her stepmother called to her sharply, "Out upon you, thou idle, starveling! Go, away to the marsh and call the cattle home. Shall I give you food and drink for sitting alone and idle?"

She was hard and cruel, this stepmother. Every morning in the cold winter she woke Gwennola before daybreak and bade her build the fire and sweep the hearth. And then perforce was the maiden sent to stumble through the dark and draw water from the spring in the black dwarf's brook. Her stepmother made her carry a cracked jug and a leaking bucket.

One morning when Gwennola went to the spring in the first pale light of dawn, she found the water muddied. By the brook's brim there stood a steed and on his back there sat a glistening knight. The knight spoke to her. "Long life to you, fair maid. Are you betrothed?" he said.

She was a child and timid, and she replied, "Sir, I know not."

"Are you betrothed? I beg you, tell me," again the horseman asked.

"Heaven bless you, Sir Knight, I am not betrothed as yet." Gwennola answered tremblingly.

"Then take my golden ring, and tell your stepmother you are betrothed to a knight returned from Nantes. Tell her there has been at Nantes a battle, and the knight's young squire is slain, and he himself is wounded by a sword thrust. But say to her that in three weeks and three days he will come to the manor and marry the fair Gwennola."

They said farewell; she hastened home. And when she looked at the ring, it was the ring her foster brother had worn on his left hand.

One week, two weeks, three weeks went by and the young knight had not yet come home.

Then said the stepmother to Gwennola, "You must get married, and I have decided what to do. I have found, daughter, just the husband that you need."

"Have mercy, stepmother! I desire no other husband than my foster brother who will be home again. He has given me my wedding ring, and in three days he will come and carry me hence."

"Be silent about your golden wedding ring!" commanded the cruel woman. "Else I will take a stick to teach you how to talk to me. Whether you wish it or not it is Cracked Joe, the stable groom, that you are going to marry."

"You wish me to marry Cracked Joe the stable groom! Oh, fie upon you!" cried the fair Gwennola, "I should die of grief. . . . Oh, mother, my own dear mother, if you were but in this world today!"

"Go and weep in the stable yard," jeered the cruel stepmother. "Sob and cry as much as you like. No matter how many antics you perform, in three days the wedded wife of Cracked Joe you shall be."

And even while they talked the white-haired sexton was on his way about the countryside ringing his plaintive bell. He carried tidings of death.

"Pray for the soul of a noble knight," he called, "For he was a kind, great-hearted man. He was mortally wounded near Nantes by a cruel sword thrust. Tomorrow at sunset the funeral watch will begin, and the next morning we shall bear him from the white church to the tomb."

At the wedding feast one guest said to another, "You are going home early!"

"Am I going home early? Yes, that am I indeed. The wedding feast is not over, the dancing has not begun. But I cannot hide the pity my heart feels for the bride, nor the horror I have for the cowherd, Cracked Joe, who is seated beside her in the manor."

Around the poor maid, Gwennola, everyone was shedding tears, even the parish priest. And in the church that morning everyone had wept, young and old, except the stepmother.

When they had come back to the manor house the more gayly the bagpipers played or the more her friends tried to comfort her the more the heart of the lovely Gwennola was torn. They led her to the table, to the highest seat, but neither a sip of water nor a mouthful of bread would she take. They wished to lead her to the bridal chamber but she threw away her ring and tore off her bridal wreath. Then she fled away from the house, her fair locks flowing out behind her. And none knew whither she had gone.

The lights were out, all were asleep in the manor house, but the poor maid who was in hiding was shivering with fever. At length she heard a noise, as if someone were approaching.

She ran out from her hiding place and climbed behind the knight on his white steed. She twined her pale arms around him, she put her cheek against his cold armor. 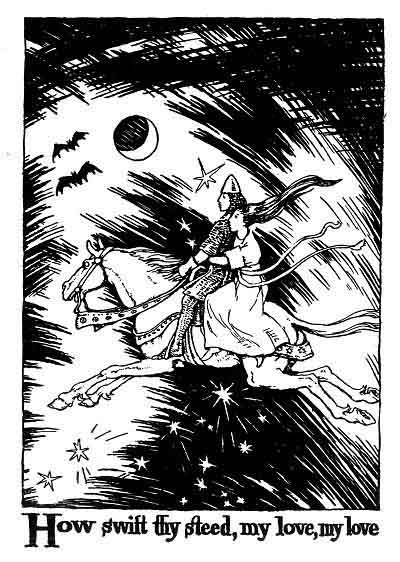 "How swiftly we are riding, my love, my love!" the maiden said. "Me seemeth we have ridden a hundred leagues. How happy I am with you, with you, with you! Never has my heart beat so joyously as now. Is my mother's house far distant? Fain would I reach it."

"Hold tightly, beloved, soon we shall be there."

The night owl sped hooting before them, and the wild beasts of the forest fled frightened by the sound of the horse's hoofs echoing strangely on the wind of night.

"How lithe is thy steed and how bright thine armor! How tall thou art grown, love of my heart! Is mine own mother's manor far from here?" asked Gwennola.

"Hold tightly, my dear, my sweet, soon shall we be there."

"Thy heart is of ice, thy hair is damp, thy hand is chill as the winter's wind. I fear thou art acold," the maiden said.

"Hold tightly, my dear, my sweet, it is not far. Hearest thou not the heavenly music they are playing so joyfully for our wedding day?"

Hardly had the knight thus spoken when his white steed stopped. The animal was trembling from mane to hoof. Was it fear or ecstasy that resounded in his neigh?

The knight and maid were on an island where folk were merrymaking, where youths and damsels frolicked beneath fragrant, bounteous trees. The trees were laden with bright apples. Behind them the sun was rising o'er the mountains. A brook was sparkling joyously by. Its waters were the water of life. Behold, were this bubbling brook but quaffed it brought again to life and youth those souls who had left behind on earth forever their weary, mortal bodies.

Gwennola's mother and two sisters were among these lovely men and maidens. And around them was naught but happiness, songs and joyful cries.

The next morning when the sun arose the weeping wedding guests bore the spotless body of little Gwennola from her hiding place to her last bed in the tomb.

If you use Facebook or Google+ & enjoyed The Foster Brother, please tell your friends and let us know to find more like it for you!