A long time ago there lived a King whose wisdom was noised abroad in all the country. Nothing remained long unknown to him, and it was as if the knowledge of hidden things was brought to him in the air. However, he had one curious custom. Every day at dinner, after the table had been cleared and every one gone away, a trusty servant had to bring in one other dish. But it was covered up, and the servant himself did not know what was in it, and no one else knew, for the King waited until he was quite alone before he uncovered it. This had gone on a long time, but at last there came a day when the servant could restrain his curiosity no longer, but as he was carrying the dish away he took it into his own room. As soon as he had fastened the door securely, he lifted the cover, and there he saw a white snake lying on the dish. After seeing it he could not resist the desire to taste it, and so he cut off a small piece and put it in his mouth. As soon as it touched his tongue he heard outside his window a strange chorus of delicate voices. He went and listened, and found that it was the sparrows talking together, and telling each other all they had seen in the fields and woods. The virtue of the snake had given him power to understand the speech of animals.

Now it happened one day that the Queen lost her most splendid ring, and suspicion fell upon the trusty servant, who had the general superintendence, and he was accused of stealing it. The King summoned him to his presence, and after many reproaches told him that if by the next day he was not able to name the thief he should be considered guilty, and punished. It was in vain that he protested his innocence; he could get no better sentence. In his uneasiness and anxiety he went out into the courtyard, and began to consider what he could do in so great a necessity. There sat the ducks by the running water and rested themselves, and plumed themselves with their flat bills, and held a comfortable chat. The servant stayed where he was and listened to them. They told how they had waddled about all yesterday morning and found good food; and then one of them said pitifully,

"Something lies very heavy in my craw, it is the ring that was lying under the Queen's window; I swallowed it down in too great a hurry."

Then the servant seized her by the neck, took her into the kitchen, and said to the cook,

"Kill this one, she is quite ready for cooking."

"Yes," said the cook, weighing it in her hand; "there will be no trouble of fattening this one it has been ready ever so long."

She then slit up its neck, and when it was opened the Queen's ring was found in its craw. The servant could now clearly prove his innocence, and in order to make up for the injustice he had suffered the King permitted him to ask some favour for himself, and also promised him the place of greatest honour in the royal household.

But the servant refused it, and only asked for a horse and money for travelling, for he had a fancy to see the world, and look about him a little. So his request was granted, and he set out on his way; and one day he came to a pool of water, by which he saw three fishes who had got entangled in the rushes, and were panting for water. Although fishes are usually considered dumb creatures, he understood very well their lament that they were to perish so miserably; and as he had a compassionate heart he dismounted from his horse, and put the three fishes back again into the water. They quivered all over with joy, stretched out their heads, and called out to him,

"We will remember and reward thee, because thou hast delivered us." He rode on, and after a while he heard a small voice come up from the sand underneath his horse's feet. He listened, and understood how an ant-king was complaining,

"If only these men would keep off, with their great awkward beasts! here comes this stupid horse treading down my people with his hard hoofs!"

The man then turned his horse to the side-path, and the ant-king called out to him,

"We will remember and reward thee!"

The path led him through a wood, and there he saw a father-raven and mother-raven standing by their nest and throwing their young ones out.

"Off with you! young gallows-birds!" cried they; "we cannot stuff you any more; you are big enough to fend for yourselves!" The poor young ravens lay on the ground, fluttering, and beating the air with their pinions, and crying,

"We are poor helpless things, we cannot fend for ourselves, we cannot even fly! we can only die of hunger!"

Then the kind young man dismounted, killed his horse with his dagger, and left it to the young ravens for food. They came hopping up, feasted away at it, and cried,

"We will remember and reward thee!"

So now he had to use his own legs, and when he had gone a long way he came to a great town. There was much noise and thronging in the streets, and there came a man on a horse, who proclaimed,

"That the King's daughter seeks a husband, but he who wishes to marry her must perform a difficult task, and if he cannot carry it through successfully, he must lose his life."

Many had already tried, but had lost their lives, in vain. The young man, when he saw the King's daughter, was so dazzled by her great beauty, that he forgot all danger, went to the King and offered himself as a wooer.

Then he was led to the sea-side, and a gold ring was thrown into the water before his eyes. Then the King told him that he must fetch the ring up again from the bottom of the sea, saying,

"If you come back without it, you shall be put under the waves again and again until you are drowned."

Every one pitied the handsome young man, but they went, and left him alone by the sea. As he was standing on the shore and thinking of what he should do, there came three fishes swimming by, none other than those he had set free. The middle one had a mussel in his mouth, and he laid it on the strand at the young man's feet; and when he took it up and opened it there was the gold ring inside! Full of joy he carried it to the King, and expected the promised reward; but the King's daughter, proud of her high birth, despised him, and set him another task to perform. She went out into the garden, and strewed about over the grass ten sacks full of millet seed.

"By the time the sun rises in the morning you must have picked up all these," she said, "and not a grain must be wanting."

The young man sat down in the garden and considered how it was possible to do this task, but he could contrive nothing, and stayed there, feeling very sorrowful, and expecting to be led to death at break of day. But when the first beams of the sun fell on the garden he saw that the ten sacks were all filled, standing one by the other, and not even a grain was missing. The ant-king had arrived in the night with his thousands of ants, and the grateful creatures had picked up all the millet seed, and filled the sacks with great industry. The King's daughter came herself into the garden and saw with astonishment that the young man had performed all that had been given him to do. But she could not let her proud heart melt, but said,

"Although he has completed the two tasks, he shall not be my bridegroom unless he brings me an apple from the tree of life."

The young man did not know where the tree of life was to be found, but he set out and went on and on, as long as his legs could carry him, but he had no hope of finding it. When he had gone through three kingdoms he came one evening to a wood, and seated himself under a tree to go to sleep; but he heard a rustling in the boughs, and a golden apple fell into his hand. Immediately three ravens flew towards him, perched on his knee, and said,

"We are the three young ravens that you delivered from starving; when we grew big, and heard that you were seeking the golden apple, we flew over the sea to the end of the earth, where the tree of life stands, and we fetched the apple."

Full of joy the young man set off on his way home, and brought the golden apple to the King's beautiful daughter, who was without any further excuse. 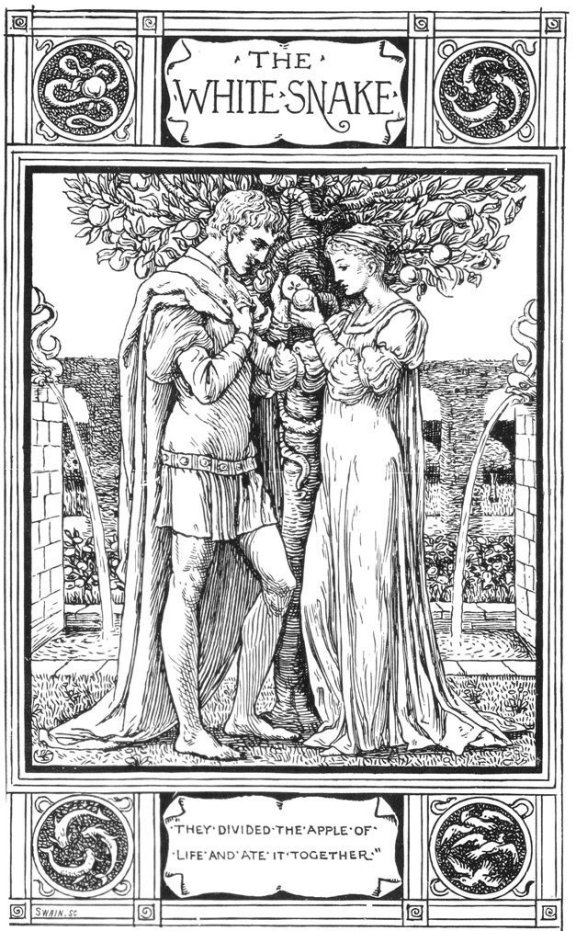 Illustration For The White Snake By Walter Crane

So they divided the apple of life, and ate it together; and their hearts were filled with love, and they lived in undisturbed happiness to a great age. 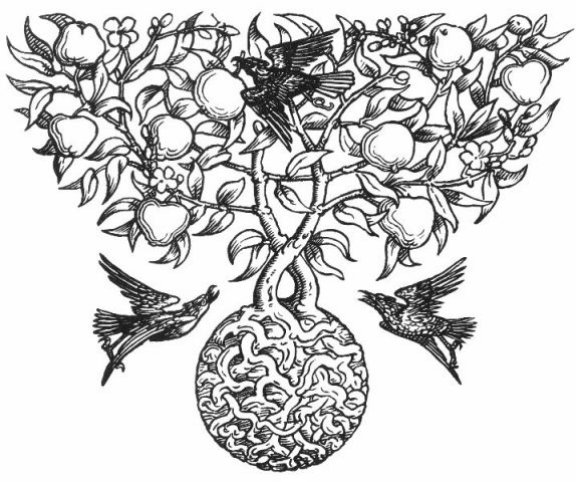 If you use Facebook or Google+ & enjoyed The White Snake, please tell your friends and let us know to find more like it for you!