There was once a girl who was lazy and would not spin, and her mother could not persuade her to it, do what she would. At last the mother became angry and out of patience, and gave her a good beating, so that she cried out loudly. At that moment the Queen was going by; as she heard the crying, she stopped; and, going into the house, she asked the mother why she was beating her daughter, so that every one outside in the street could hear her cries.

The woman was ashamed to tell of her daughter's laziness, so she said,

"I cannot stop her from spinning; she is for ever at it, and I am poor and cannot furnish her with flax enough."

Then the Queen answered,

"I like nothing better than the sound of the spinning-wheel, and always feel happy when I hear its humming; let me take your daughter with me to the castle I have plenty of flax, she shall spin there to her heart's content."

The mother was only too glad of the offer, and the Queen took the girl with her. When they reached the castle the Queen showed her three rooms which were filled with the finest flax as full as they could hold.

"Now you can spin me this flax," said she, "and when you can show it me all done you shall have my eldest son for bridegroom; you may be poor, but I make nothing of that your industry is dowry enough."

The girl was inwardly terrified, for she could not have spun the flax, even if she were to live to be a hundred years old, and were to sit spinning every day of her life from morning to evening. And when she found herself alone she began to weep, and sat so for three days without putting her hand to it. On the third day the Queen came, and when she saw that nothing had been done of the spinning she was much surprised; but the girl excused herself by saying that she had not been able to begin because of the distress she was in at leaving her home and her mother. The excuse contented the Queen, who said, however, as she went away,

"To-morrow you must begin to work."

When the girl found herself alone again she could not tell how to help herself or what to do, and in her perplexity she went and gazed out of the window. There she saw three women passing by, and the first of them had a broad flat foot, the second had a big under-lip that hung down over her chin, and the third had a remarkably broad thumb. They all of them stopped in front of the window, and called out to know what it was that the girl wanted. She told them all her need, and they promised her their help, and said,

"Then will you invite us to your wedding, and not be ashamed of us, and call us your cousins, and let us sit at your table; if you will promise this, we will finish off your flax-spinning in a very short time."

"With all my heart," answered the girl; "only come in now, and begin at once."

Then these same women came in, and she cleared a space in the first room for them to sit and carry on their spinning. The first one drew out the thread and moved the treddle that turned the wheel, the second moistened the thread, the third twisted it, and rapped with her finger on the table, and as often as she rapped a heap of yarn fell to the ground, and it was most beautifully spun. But the girl hid the three spinsters out of the Queen's sight, and only showed her, as often as she came, the heaps of well-spun yarn; and there was no end to the praises she received. When the first room was empty they went on to the second, and then to the third, so that at last all was finished. Then the three women took their leave, saying to the girl,

"Do not forget what you have promised, and it will be all the better for you."

So when the girl took the Queen and showed her the empty rooms, and the great heaps of yarn, the wedding was at once arranged, and the bridegroom rejoiced that he should have so clever and diligent a wife, and praised her exceedingly.

"I have three cousins," said the girl, "and as they have shown me a great deal of kindness, I would not wish to forget them in my good fortune; may I be allowed to invite them to the wedding, and to ask them to sit at the table with us?"

The Queen and the bridegroom said at once,

"There is no reason against it."

So when the feast began in came the three spinsters in strange guise, and the bride said,

"Dear cousins, you are welcome."

"Oh," said the bridegroom, "how come you to have such dreadfully ugly relations?"

And then he went up to the first spinster and said,

"How is it that you have such a broad flat foot?"

Then he went up to the second and said,

"How is it that you have such a great hanging lip?"

Then he asked the third,

"How is it that you have such a broad thumb?"

Then the bridegroom said that from that time forward his beautiful bride should never touch a spinning-wheel.

And so she escaped that tiresome flax-spinning. 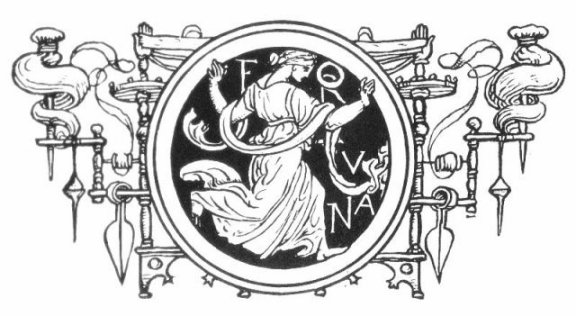 Illustration For The Three Spinsters By Walter Crane

If you use Facebook or Google+ & enjoyed The Three Spinsters, please tell your friends and let us know to find more like it for you!