There lived in a certain village a poor old woman who had collected a mess of beans, and was going to cook them. So she made a fire on her hearth, and, in order to make it burn better, she put in a handful of straw. When the beans began to bubble in the pot, one of them fell out and lay, never noticed, near a straw which was already there; soon a red-hot coal jumped out of the fire and joined the pair. The straw began first, and said,

"Dear friends, how do you come here?" The coal answered,

"I jumped out of the fire by great good luck, or I should certainly have met with my death. I should have been burned to ashes." The bean said,

"I too have come out of it with a whole skin, but if the old woman had kept me in the pot I should have been cooked into a soft mass like my comrades."

"Nor should I have met with a better fate," said the straw; "the old woman has turned my brothers into fire and smoke, sixty of them she took up at once and deprived of life. Very luckily I managed to slip through her fingers."

"What had we better do now?" said the coal.

"I think," answered the bean, "that as we have been so lucky as to escape with our lives, we will join in good fellowship together, and, lest any more bad fortune should happen to us here, we will go abroad into foreign lands."

The proposal pleased the two others, and forthwith they started on their travels. Soon they came to a little brook, and as there was no stepping-stone, and no bridge, they could not tell how they were to get to the other side. The straw was struck with a good idea, and said,

"I will lay myself across, so that you can go over me as if I were a bridge!"

So the straw stretched himself from one bank to the other, and the coal, who was of an ardent nature, quickly trotted up to go over the new-made bridge. When, however, she reached the middle, and heard the water rushing past beneath her, she was struck with terror, and stopped, and could get no farther. So the straw began to get burnt, broke in two pieces, and fell in the brook, and the coal slipped down, hissing as she touched the water, and gave up the ghost. The bean, who had prudently remained behind on the bank, could not help laughing at the sight, and not being able to contain herself, went on laughing so excessively that she burst. And now would she certainly have been undone for ever, if a tailor on his travels had not by good luck stopped to rest himself by the brook. As he had a compassionate heart, he took out needle and thread and stitched her together again. The bean thanked him in the most elegant manner, but as he had sewn her up with black stitches, all beans since then have a black seam. 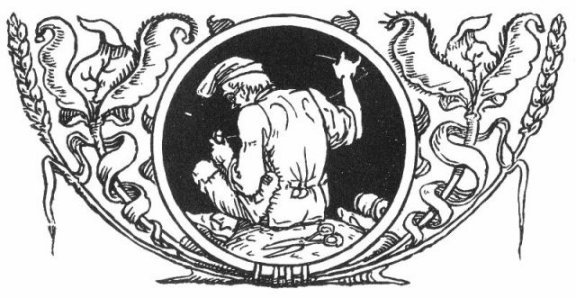 Illustration For The Straw, The Coal And The Bean By Walter Crane

If you use Facebook or Google+ & enjoyed The Straw, The Coal And The Bean, please tell your friends and let us know to find more like it for you!