A widow had two daughters; one was pretty and industrious, the other was ugly and lazy. And as the ugly one was her own daughter, she loved her much the best, and the pretty one was made to do all the work, and be the drudge of the house. Every day the poor girl had to sit by a well on the high road and spin until her fingers bled. Now it happened once that as the spindle was bloody, she dipped it into the well to wash it; but it slipped out of her hand and fell in. Then she began to cry, and ran to her step-mother, and told her of her misfortune; and her step-mother scolded her without mercy, and said in her rage,

"As you have let the spindle fall in, you must go and fetch it out again!"

Then the girl went back again to the well, not knowing what to do, and in the despair of her heart she jumped down into the well the same way the spindle had gone. After that she knew nothing; and when she came to herself she was in a beautiful meadow, and the sun was shining on the flowers that grew round her. And she walked on through the meadow until she came to a baker's oven that was full of bread; and the bread called out to her,

Then she drew near, and with the baker's peel she took out all the loaves one after the other. And she went farther on till she came to a tree weighed down with apples, and it called out to her,

Then she shook the tree until the apples fell like rain, and she shook until there were no more to fall; and when she had gathered them together in a heap, she went on farther. At last she came to a little house, and an old woman was peeping out of it, but she had such great teeth that the girl was terrified and about to run away, only the old woman called her back.

"What are you afraid of, my dear child? Come and live with me, and if you do the house-work well and orderly, things shall go well with you. You must take great pains to make my bed well, and shake it up thoroughly, so that the feathers fly about, and then in the world it snows, for I am Mother Hulda."[A]

As the old woman spoke so kindly, the girl took courage, consented, and went to her work. She did everything to the old woman's satisfaction, and shook the bed with such a will that the feathers flew about like snow-flakes: and so she led a good life, had never a cross word, but boiled and roast meat every day. When she had lived a long time with Mother Hulda, she began to feel sad, not knowing herself what ailed her; at last she began to think she must be home-sick; and although she was a thousand times better off than at home where she was, yet she had a great longing to go home. At last she said to her mistress,

"I am home-sick, and although I am very well off here, I cannot stay any longer; I must go back to my own home."

"It pleases me well that you should wish to go home, and, as you have served me faithfully, I will undertake to send you there!"

She took her by the hand and led her to a large door standing open, and as she was passing through it there fell upon her a heavy shower of gold, and the gold hung all about her, so that she was covered with it. 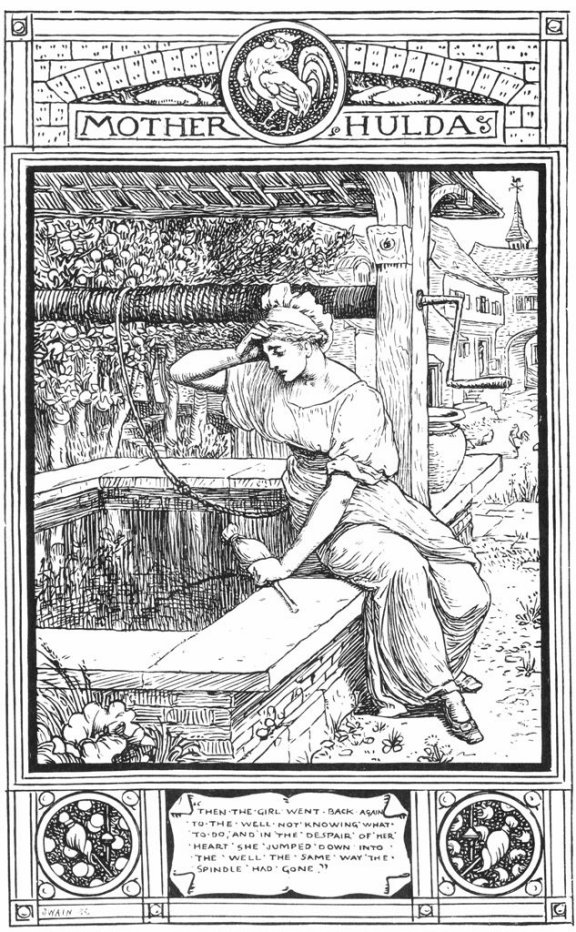 "All this is yours, because you have been so industrious," said Mother Hulda; and, besides that, she returned to her her spindle, the very same that she had dropped in the well. And then the door was shut again, and the girl found herself back again in the world, not far from her mother's house; and as she passed through the yard the cock stood on the top of the well and cried,

Cock-a-doodle doo!
Our golden girl has come home too!

Then she went in to her mother, and as she had returned covered with gold she was well received.

So the girl related all her history, and what had happened to her, and when the mother heard how she came to have such great riches she began to wish that her ugly and idle daughter might have the same good fortune. So she sent her to sit by the well and spin; and in order to make her spindle bloody she put her hand into the thorn hedge. Then she threw the spindle into the well, and jumped in herself. She found herself, like her sister, in the beautiful meadow, and followed the same path, and when she came to the baker's oven, the bread cried out,

But the lazy-bones answered,

"I have no desire to black my hands," and went on farther. Soon she came to the apple-tree, who called out,

"That is all very fine; suppose one of you should fall on my head," and went on farther. When she came to Mother Hulda's house she did not feel afraid, as she knew beforehand of her great teeth, and entered into her service at once. The first day she put her hand well to the work, and was industrious, and did everything Mother Hulda bade her, because of the gold she expected; but the second day she began to be idle, and the third day still more so, so that she would not get up in the morning. Neither did she make Mother Hulda's bed as it ought to have been made, and did not shake it for the feathers to fly about. So that Mother Hulda soon grew tired of her, and gave her warning, at which the lazy thing was well pleased, and thought that now the shower of gold was coming; so Mother Hulda led her to the door, and as she stood in the doorway, instead of the shower of gold a great kettle full of pitch was emptied over her.

"That is the reward for your service," said Mother Hulda, and shut the door. So the lazy girl came home all covered with pitch, and the cock on the top of the well seeing her, cried,

Cock-a-doodle doo!
Our dirty girl has come home too!"

And the pitch remained sticking to her fast, and never, as long as she lived, could it be got off. 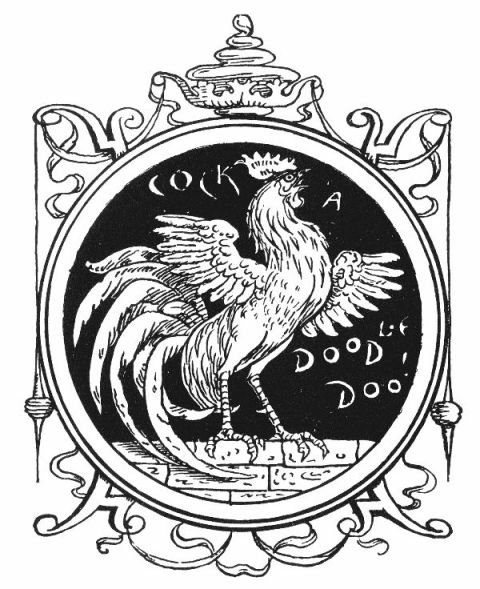 If you use Facebook or Google+ & enjoyed Mother Hulda, please tell your friends and let us know to find more like it for you!