There was once an old fox with nine tails, who wished to put his wife's affection to proof, pretended to be dead, and stretched himself under the bench quite stiff, and never moved a joint, on which Mrs. Fox retired to her room and locked herself in, while her maid, the cat, stayed by the kitchen fire and attended to the cooking.

When it became known that the old fox was dead, some suitors prepared to come forward, and presently the maid heard some one knocking at the house door; she went and opened it, and there was a young fox, who said,

What is she doing, Miss Cat?
Is she sleeping, or waking, or what is she at?

And the cat answered,

I am not asleep, I am quite wide awake,
Perhaps you would know what I'm going to make;
I'm melting some butter, and warming some beer,
Will it please you sit down, and partake of my cheer?

She is sitting upstairs in her grief,
And her eyes with her weeping are sore;
From her sorrow she gets no relief,
Now poor old Mr. Fox is no more!

"But just tell her, miss, that a young fox has come to woo her."

Up went the cat pit-a-pat, pit-a-pat.

"But what is he like?" asked Mrs. Fox. "Has he nine beautiful tails, like dear Mr. Fox?"

So the cat went down-stairs, and sent the suitor away. Soon there was another knock at the door. It was another fox come to woo. He had two tails, but he met with no better success than the first. Then there arrived more foxes, one after another, each with one more tail than the last, but they were all dismissed, until there came one with nine tails like old Mr. Fox. When the widow heard that she cried, full of joy, to the cat,

But before they could do so, up jumped old Mr. Fox from under the bench, and cudgelled the whole pack, driving them, with Mrs. Fox, out of the house.

When old Mr. Fox died there came a wolf to woo, and he knocked at the door, and the cat opened to him; and he made her a bow, and said,
Good day, Miss Cat, so brisk and gay,
How is it that alone you stay?
And what is it you cook to-day?

Bread so white, and milk so sweet,
Will it please you sit and eat?

"Thank you very much, Miss Cat," answered the wolf; "but is Mrs. Fox at home?"

Then the cat said,

She is sitting upstairs in her grief,
And her eyes with her weeping are sore,
From her sorrow she gets no relief,
Now poor old Mr. Fox is no more!

But Mrs. Fox asked, "Has the gentleman red breeches and a sharp nose?"

After the wolf was sent away, there came a dog, a stag, a hare, a bear, a lion, and several other wild animals. But they all of them lacked the good endowments possessed by the late Mr. Fox, so that the cat had to send them all away. At last came a young fox. And Mrs. Fox inquired whether he had red breeches and a sharp nose.

"Then I will have him," said Mrs. Fox, and bade the cat make ready the wedding-feast.

Now, cat, sweep the parlours and bustle about,
And open the window, turn Mr. Fox out;
Then, if you've a fancy for anything nice,
Just manage to catch for yourself a few mice,
You may eat them alone,
I do not want one.

So she was married to young Master Fox with much dancing and rejoicing, and for anything I have heard to the contrary, they may be dancing still. 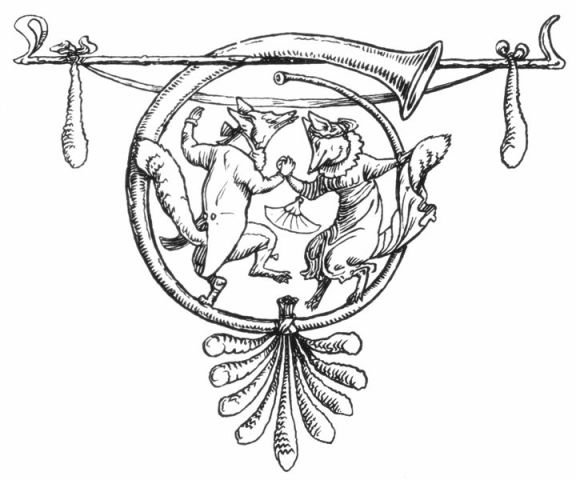 Illustration For How Mrs Fox Married Again By Walter Crane

If you use Facebook or Google+ & enjoyed How Mrs. Fox Married Again, please tell your friends and let us know to find more like it for you!