Hans had served his master seven years, and at the end of the seventh year he said,

"Master, my time is up; I want to go home and see my mother, so give me my wages."

"You have served me truly and faithfully," said the master; "as the service is, so must the wages be," and he gave him a lump of gold as big as his head. Hans pulled his handkerchief out of his pocket and tied up the lump of gold in it, hoisted it on his shoulder, and set off on his way home. And as he was trudging along, there came in sight a man riding on a spirited horse, and looking very gay and lively. "Oh!" cried Hans aloud, "how splendid riding must be! sitting as much at one's ease as in an arm-chair, stumbling over no stones, saving one's shoes, and getting on one hardly knows how!"

The horseman heard Hans say this, and called out to him,

"Well Hans, what are you doing on foot?"

"I can't help myself," said Hans, "I have this great lump to carry; to be sure, it is gold, but then I can't hold my head straight for it, and it hurts my shoulder."

"I'll tell you what," said the horseman, "we will change; I will give you my horse, and you shall give me your lump of gold."

"With all my heart," said Hans; "but I warn you, you will find it heavy." And the horseman got down, took the gold, and, helping Hans up, he gave the reins into his hand.

And Hans, as he sat upon his horse, was glad at heart, and rode off with merry cheer. After a while he thought he should like to go quicker, so he began to click with his tongue and to cry "Gee-up!" And the horse began to trot, and Hans was thrown before he knew what was going to happen, and there he lay in the ditch by the side of the road. The horse would have got away but that he was caught by a peasant who was passing that way and driving a cow before him. And Hans pulled himself together and got upon his feet, feeling very vexed. "Poor work, riding," said he, "especially on a jade like this, who starts off and throws you before you know where you are, going near to break your neck; never shall I try that game again; now, your cow is something worth having, one can jog on comfortably after her and have her milk, butter, and cheese every day, into the bargain. What would I not give to have such a cow!"

"Well now," said the peasant, "since it will be doing you such a favour, I don't mind exchanging my cow for your horse."

Hans agreed most joyfully, and the peasant, swinging himself into the saddle, was soon out of sight.

And Hans went along driving his cow quietly before him, and thinking all the while of the fine bargain he had made.

"With only a piece of bread I shall have everything I can possibly want, for I shall always be able to have butter and cheese to it, and if I am thirsty I have nothing to do but to milk my cow; and what more is there for heart to wish!"

And when he came to an inn he made a halt, and in the joy of his heart ate up all the food he had brought with him, dinner and supper and all, and bought half a glass of beer with his last two farthings. Then on he went again driving his cow, until he should come to the village where his mother lived. It was now near the middle of the day, and the sun grew hotter and hotter, and Hans found himself on a heath which it would be an hour's journey to cross. And he began to feel very hot, and so thirsty that his tongue clove to the roof of his mouth.

"Never mind," said Hans; "I can find a remedy. I will milk my cow at once." And tying her to a dry tree, and taking off his leather cap to serve for a pail, he began to milk, but not a drop came. And as he set to work rather awkwardly, the impatient beast gave him such a kick on the head with his hind foot that he fell to the ground, and for some time could not think where he was; when luckily there came by a butcher who was wheeling along a young pig in a wheelbarrow.

"Here's a fine piece of work!" cried he, helping poor Hans on his legs again. Then Hans related to him all that had happened; and the butcher handed him his pocket-flask, saying,

"Here, take a drink, and be a man again; of course the cow would give no milk; she is old and only fit to draw burdens, or to be slaughtered."

"Well, to be sure," said Hans, scratching his head. "Who would have thought it? of course it is a very handy way of getting meat when a man has a beast of his own to kill; but for my part I do not care much about cow beef, it is rather tasteless. Now, if I had but a young pig, that is much better meat, and then the sausages!"

"Look here, Hans," said the butcher, "just for love of you I will exchange, and will give you my pig instead of your cow."

"Heaven reward such kindness!" cried Hans, and handing over the cow, received in exchange the pig, who was turned out of his wheelbarrow and was to be led by a string.

So on went Hans, thinking how everything turned out according to his wishes, and how, if trouble overtook him, all was sure to be set right directly. After a while he fell in with a peasant, who was carrying a fine white goose under his arm. They bid each other good-day, and Hans began to tell about his luck, and how he had made so many good exchanges. And the peasant told how he was taking the goose to a christening feast.

"Just feel how heavy it is," said he, taking it up by the wings; "it has been fattening for the last eight weeks; and when it is roasted, won't the fat run down!"

"Yes, indeed," said Hans, weighing it in his hand, "very fine to be sure; but my pig is not to be despised."

Upon which the peasant glanced cautiously on all sides, and shook his head.

"I am afraid," said he, "that there is something not quite right about your pig. In the village I have just left one had actually been stolen from the bailiff's yard. I fear, I fear you have it in your hand; they have sent after the thief, and it would be a bad look-out for you if it was found upon you; the least that could happen would be to be thrown into a dark hole."

Poor Hans grew pale with fright. "For heaven's sake," said he, "help me out of this scrape, I am a stranger in these parts; take my pig and give me your goose."

"It will be running some risk," answered the man, "but I will do it sooner than that you should come to grief." And so, taking the cord in his hand, he drove the pig quickly along a by-path, and lucky Hans went on his way home with the goose under his arm. "The more I think of it," said he to himself, "the better the bargain seems; first I get the roast goose; then the fat; that will last a whole year for bread and dripping; and lastly the beautiful white feathers which I can stuff my pillow with; how comfortably I shall sleep upon it, and how pleased my mother will be!"

And when he reached the last village, he saw a knife-grinder with his barrow; and his wheel went whirring round, and he sang,

"My scissors I grind, and my wheel I turn;

And all good fellows my trade should learn,

For all that I meet with just serves my turn."

And Hans stood and looked at him; and at last he spoke to him and said,

"You seem very well off, and merry with your grinding."

"Yes," answered the knife-grinder, "my handiwork pays very well. I call a man a good grinder who, every time he puts his hand in his pocket finds money there. But where did you buy that fine goose?"

"I did not buy it, but I exchanged it for my pig," said Hans.

"That I exchanged for a cow."

"That I exchanged for a horse."

"I gave for the horse a lump of gold as big as my head."

"Oh, that was my wage for seven years' service."

"You seem to have fended for yourself very well," said the knife-grinder. "Now, if you could but manage to have money in your pocket every time you put your hand in, your fortune is made."

"How shall I manage that?" said Hans.

"You must be a knife-grinder like me," said the man. "All you want is a grindstone, the rest comes of itself: I have one here; to be sure it is a little damaged, but I don't mind letting you have it in exchange for your goose; what say you?"

"How can you ask?" answered Hans. "I shall be the luckiest fellow in the world, for if I find money whenever I put my hand in my pocket, there is nothing more left to want."

And so he handed over the goose to the pedlar and received the grindstone in exchange.

"Now," said the knife-grinder, taking up a heavy common stone that lay near him, "here is another proper sort of stone that will stand a good deal of wear and that you can hammer out your old nails upon. Take it with you, and carry it carefully."

Hans lifted up the stone and carried it off with a contented mind. "I must have been born under a lucky star!" cried he, while his eyes sparkled for joy. "I have only to wish for a thing and it is mine."

After a while he began to feel rather tired, as indeed he had been on his legs since daybreak; he also began to feel rather hungry, as in the fulness of his joy at getting the cow, he had eaten up all he had. At last he could scarcely go on at all, and had to make a halt every moment, for the stones weighed him down most unmercifully, and he could not help wishing that he did not feel obliged to drag them along. And on he went at a snail's pace until he came to a well; then he thought he would rest and take a drink of the fresh water. And he placed the stones carefully by his side at the edge of the well; then he sat down, and as he stooped to drink, he happened to give the stones a little push, and they both fell into the water with a splash. And then Hans, having watched them disappear, jumped for joy, and thanked his stars that he had been so lucky as to get rid of the stones that had weighed upon him so long without any effort of his own.

"I really think," cried he, "I am the luckiest man under the sun." So on he went, void of care, until he reached his mother's house. 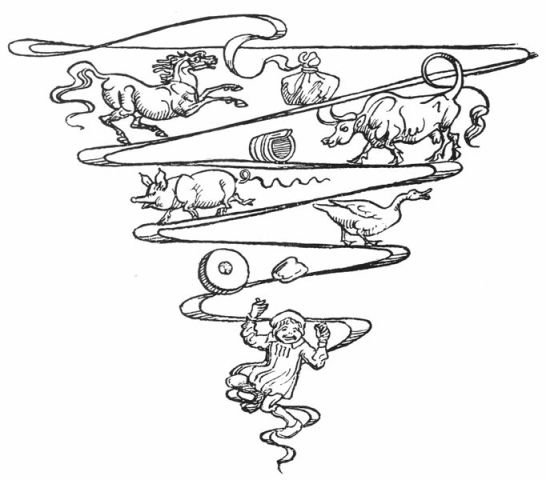 Illustration For Hans In Luck By Walter Crane

If you use Facebook or Google+ & enjoyed Hans In Luck, please tell your friends and let us know to find more like it for you!