There was once a shoemaker, who, through no fault of his own, became so poor that at last he had nothing left but just enough leather to make one pair of shoes. He cut out the shoes at night, so as to set to work upon them next morning; and as he had a good conscience, he laid himself quietly down in his bed, committed himself to heaven, and fell asleep. In the morning, after he had said his prayers, and was going to get to work, he found the pair of shoes made and finished, and standing on his table. He was very much astonished, and could not tell what to think, and he took the shoes in his hand to examine them more nearly; and they were so well made that every stitch was in its right place, just as if they had come from the hand of a master-workman.

Soon after a purchaser entered, and as the shoes fitted him very well, he gave more than the usual price for them, so that the shoemaker had enough money to buy leather for two more pairs of shoes. He cut them out at night, and intended to set to work the next morning with fresh spirit; but that was not to be, for when he got up they were already finished, and a customer even was not lacking, who gave him so much money that he was able to buy leather enough for four new pairs. Early next morning he found the four pairs also finished, and so it always happened; whatever he cut out in the evening was worked up by the morning, so that he was soon in the way of making a good living, and in the end became very well to do.

One night, not long before Christmas, when the shoemaker had finished cutting out, and before he went to bed, he said to his wife,

"How would it be if we were to sit up to-night and see who it is that does us this service?"

His wife agreed, and set a light to burn. Then they both hid in a corner of the room, behind some coats that were hanging up, and then they began to watch. As soon as it was midnight they saw come in two neatly-formed naked little men, who seated themselves before the shoemaker's table, and took up the work that was already prepared, and began to stitch, to pierce, and to hammer so cleverly and quickly with their little fingers that the shoemaker's eyes could scarcely follow them, so full of wonder was he. And they never left off until everything was finished and was standing ready on the table, and then they jumped up and ran off.

The next morning the shoemaker's wife said to her husband, "Those little men have made us rich, and we ought to show ourselves grateful. With all their running about, and having nothing to cover them, they must be very cold. I'll tell you what; I will make little shirts, coats, waistcoats, and breeches for them, and knit each of them a pair of stockings, and you shall make each of them a pair of shoes."

The husband consented willingly, and at night, when everything was finished, they laid the gifts together on the table, instead of the cut-out work, and placed themselves so that they could observe how the little men would behave. When midnight came, they rushed in, ready to set to work, but when they found, instead of the pieces of prepared leather, the neat little garments put ready for them, they stood a moment in surprise, and then they testified the greatest delight. With the greatest swiftness they took up the pretty garments and slipped them on, singing,

What spruce and dandy boys are we!
No longer cobblers we will be.

Then they hopped and danced about, jumping over the chairs and tables, and at last they danced out at the door.

From that time they were never seen again; but it always went well with the shoemaker as long as he lived, and whatever he took in hand prospered.

There was once a poor servant maid, who was very cleanly and industrious; she swept down the house every day, and put the sweepings on a great heap by the door. One morning, before she began her work, she found a letter, and as she could not read, she laid her broom in the corner, and took the letter to her master and mistress, to see what it was about; and it was an invitation from the elves, who wished the maid to come and stand godmother to one of their children. The maid did not know what to do; and as she was told that no one ought to refuse the elves anything, she made up her mind to go. So there came three little elves, who conducted her into the middle of a high mountain, where the little people lived. Here everything was of a very small size, but more fine and elegant than can be told. The mother of the child lay in a bed made of ebony, studded with pearls, the counterpane was embroidered with gold, the cradle was of ivory, and the bathing-tub of gold. So the maid stood godmother, and was then for going home, but the elves begged her to stay at least three more days with them; and so she consented, and spent the time in mirth and jollity, and the elves seemed very fond of her. At last, when she was ready to go away, they filled her pockets full of gold, and led her back again out of the mountain. When she got back to the house, she was going to begin working again, and took her broom in her hand; it was still standing in the corner where she had left it, and began to sweep. Then came up some strangers and asked her who she was, and what she was doing. And she found that instead of three days, she had been seven years with the elves in the mountain, and that during that time her master and mistress had died.

The elves once took a child away from its mother, and left in its place a changeling with a big head and staring eyes, who did nothing but eat and drink. The mother in her trouble went to her neighbours and asked their advice. The neighbours told her to take the changeling into the kitchen and put it near the hearth, and then to make up the fire, and boil water in two egg-shells; that would make the changeling laugh, and if he laughed, it would be all over with him. So the woman did as her neighbours advised. And when she set the egg-shells of water on the fire, the changeling said,
Though old I be
As forest tree,
Cooking in an egg-shell never did I see!

and began to laugh. And directly there came in a crowd of elves bringing in the right child; and they laid it near the hearth, and carried the changeling away with them. 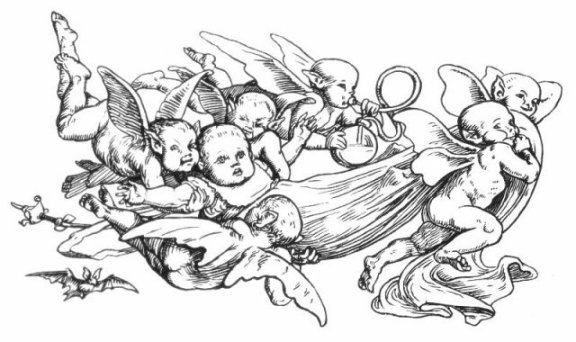 Illustration For The Elves By Walter Crane

If you use Facebook or Google+ & enjoyed Three Stories Of Elves, please tell your friends and let us know to find more like it for you!