There was once a sheep-dog whose master behaved ill to him and did not give him enough to eat, and when for hunger he could bear it no longer, he left his service very sadly. In the street he was met by a sparrow, who said,

And the dog answered,

"I am hungry and have nothing to eat."

"Dear brother, come with me into the town; I will give you plenty."

Then they went together into the town, and soon they came to a butcher's stall, and the sparrow said to the dog,

"Stay here while I reach you down a piece of meat," and he perched on the stall, looked round to see that no one noticed him, and pecked, pulled, and dragged so long at a piece that lay near the edge of the board that at last it slid to the ground. The dog picked it up, ran with it into a corner, and ate it up. Then said the sparrow,

"Now come with me to another stall, and I will get you another piece, so that your hunger may be satisfied."

When the dog had devoured a second piece the sparrow asked,

"Dog, my brother, are you satisfied now?"

"That also shall you have; come with me." And he led him to a baker's stall and pecked at a few little rolls until they fell to the ground, and as the dog still wanted more, they went to another stall farther on and got more bread. When that was done the sparrow said,

"Dog, my brother, are you satisfied yet?"

"Yes," answered he, "and now we will walk a little outside the town."

And they went together along the high road. It was warm weather, and when they had gone a little way the dog said,

"I am tired, and would like to go to sleep."

"Well, do so," said the sparrow; "in the meanwhile I will sit near on a bough." The dog laid himself in the road and fell fast asleep, and as he lay there a waggoner came up with a waggon and three horses, laden with two casks of wine; the sparrow, seeing that he was not going to turn aside but kept in the beaten track, just where the dog lay, cried out,

"Waggoner, take care, or you shall suffer for it!"

But the waggoner, muttering, "What harm can you do to me?" cracked his whip and drove his waggon over the dog, and he was crushed to death by the wheels. Then the sparrow cried,

"Thou hast killed the dog my brother, and it shall cost thee horses and cart!"

"Oh! horses and cart!" said the waggoner, "what harm can you do me, I should like to know?" and drove on. The sparrow crept under the covering of the waggon and pecked at the bung-hole of one of the casks until the cork came out, and all the wine ran out without the waggoner noticing. After a while, looking round, he saw that something dripped from the waggon, and on examining the casks he found that one of them was empty, and he cried out,

"Not ruined enough yet!" said the sparrow, and flying to one of the horses he perched on his head and pecked at his eyes. When the waggoner saw that he took out his axe to hit the sparrow, who at that moment flew aloft, and the waggoner missing him struck the horse on the head, so that he fell down dead.

"Not ruined enough yet!" said the sparrow, and as the waggoner drove on with the two horses that were left the sparrow crept again under the waggon-covering and pecked the cork out of the second cask, so that all the wine leaked out. When the waggoner became aware of it, he cried out again,

"Oh! I am a ruined man!" But the sparrow answered, "Not ruined enough yet!" and perched on the second horse's head and began pecking at his eyes. Back ran the waggoner and raised his axe to strike, but the sparrow flying aloft, the stroke fell on the horse, so that he was killed.

"Oh! I am a ruined man!" cried the waggoner.

"Not ruined enough yet!" said the sparrow, and perching on the third horse began pecking at his eyes. The waggoner struck out in his anger at the sparrow without taking aim, and missing him, he laid his third horse dead.

"Not ruined enough yet!" answered the sparrow, flying off; "I will see to that at home."

So the waggoner had to leave his waggon standing, and went home full of rage.

"Oh!" said he to his wife, "what ill-luck I have had! the wine is spilt, and the horses are all three dead."

"O husband!" answered she, "such a terrible bird has come to this house; he has brought with him all the birds of the air, and there they are in the midst of our wheat devouring it." And he looked and there were thousands upon thousands of birds sitting on the ground, having eaten up all the wheat, and the sparrow in the midst, and the waggoner cried,

"Not ruined enough yet!" answered the sparrow; "Waggoner, it shall cost thee thy life!" and he flew away.

Now the waggoner, having lost everything he possessed, went in-doors and sat down angry and miserable behind the stove. The sparrow was perched outside on the window-sill, and cried, "Waggoner, it shall cost thee thy life!" Then the waggoner seized his axe and threw it at the sparrow, but it broke the window sash in two and did not touch the sparrow, who now hopped inside, perched on the stove, and cried.

"Waggoner it shall cost thee thy life!" and he, mad and blind with rage, beat in the stove, and as the sparrow flew from one spot to another, hacked everything in pieces, furniture, looking-glasses, benches, table, and the very walls of his house, and yet did not touch the sparrow.

At last he caught and held him in his hand.

"No!" cried he, "that were too easy a death; I will swallow him," and as the bird was fluttering in the man's mouth, it stretched out its head, saying,

"Waggoner, it shall cost thee thy life!"

Then the waggoner reached the axe to his wife saying,

"Wife, strike me this bird dead."

The wife struck, but missed her aim, and the blow fell on the waggoner's head, and he dropped down dead.

But the sparrow flew over the hills and away. 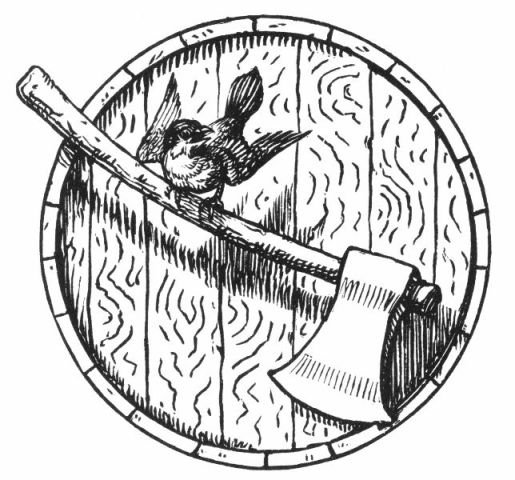 Illustration For The Dog And The Sparrow By Walter Crane

If you use Facebook or Google+ & enjoyed The Dog And The Sparrow, please tell your friends and let us know to find more like it for you!