There was once a cook called Grethel, who wore shoes with red heels, and when she went out in them she gave herself great airs, and thought herself very fine indeed. When she came home again, she would take a drink of wine to refresh herself, and as that gave her an appetite, she would take some of the best of whatever she was cooking, until she had had enough; "for," said she, "a cook must know how things taste."

Now it happened that one day her master said to her,

"Grethel, I expect a guest this evening; you must make ready a pair of fowls."

"Certainly, sir, I will," answered Grethel. So she killed the fowls, cleaned them, and plucked them, and put them on the spit, and then, as evening drew near, placed them before the fire to roast. And they began to be brown, and were nearly done, but the guest had not come.

"If he does not make haste," cried Grethel to her master, "I must take them away from the fire; it's a pity and a shame not to eat them now, just when they are done to a turn." And the master said he would run himself and fetch the guest. As soon as he had turned his back, Grethel took the fowls from before the fire.

"Standing so long before the fire," said she, "makes one hot and thirsty, and who knows when they will come! in the meanwhile I will go to the cellar and have a drink." So down she ran, took up a mug, and saying, "Here's to me!" took a good draught. "One good drink deserves another," she said "and it should not be cut short;" so she took another hearty draught. Then she went and put the fowls down to the fire again, and, basting them with butter, she turned the spit briskly round. And now they began to smell so good that Grethel saying, "I must find out whether they really are all right," licked her fingers, and then cried, "Well, I never! the fowls are good; it's a sin and a shame that no one is here to eat them!"

So she ran to the window to see if her master and his guest were coming, but as she could see nobody she went back to her fowls. "Why, one of the wings is burning!" she cried presently, "I had better eat it and get it out of the way." So she cut it off and ate it up, and it tasted good, and then she thought,

"I had better cut off the other too, in case the master should miss anything." And when both wings had been disposed of she went and looked for the master, but still he did not come.

"Who knows," said she, "whether they are coming or not? they may have put up at an inn." And after a pause she said again, "Come, I may as well make myself happy, and first I will make sure of a good drink and then of a good meal, and when all is done I shall be easy; the gifts of the gods are not to be despised." So first she ran down into the cellar and had a famous drink, and ate up one of the fowls with great relish. And when that was done, and still the master did not come, Grethel eyed the other fowl, saying, "What one is the other must be, the two belong to each other, it is only fair that they should be both treated alike; perhaps, when I have had another drink, I shall be able to manage it." So she took another hearty drink, and then the second fowl went the way of the first.

Just as she was in the middle of it the master came back. "Make haste, Grethel," cried he, "the guest is coming directly!" "Very well, master," she answered, "it will soon be ready." The master went to see that the table was properly laid, and, taking the great carving knife with which he meant to carve the fowls, he sharpened it upon the step. Presently came the guest, knocking very genteelly and softly at the front door. Grethel ran and looked to see who it was, and when she caught sight of the guest she put her finger on her lip saying, "Hush! make the best haste you can out of this, for if my master catches you, it will be bad for you; he asked you to come to supper, but he really means to cut off your ears! Just listen how he is sharpening his knife!"

The guest, hearing the noise of the sharpening, made off as fast as he could go. And Grethel ran screaming to her master. "A pretty guest you have asked to the house!" cried she.

"What indeed!" said she; "why, he has gone and run away with my pair of fowls that I had just dished up."

"That's pretty sort of conduct!" said the master, feeling very sorry about the fowls; "he might at least have left me one, that I might have had something to eat." And he called out to him to stop, but the guest made as if he did not hear him; then he ran after him, the knife still in his hand, crying out, "Only one! only one!" meaning that the guest should let him have one of the fowls and not take both, but the guest thought he meant to have only one of his ears, and he ran so much the faster that he might get home with both of them safe. 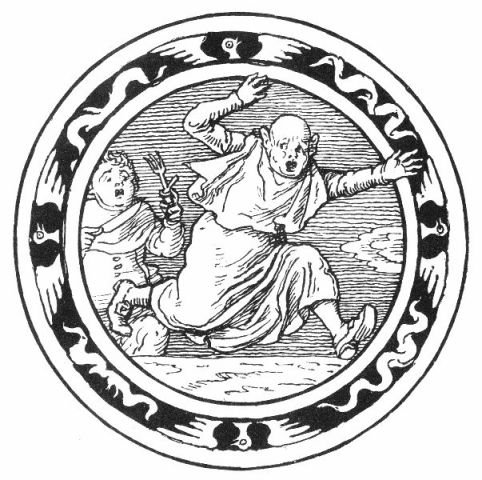 If you use Facebook or Google+ & enjoyed Clever Grethel, please tell your friends and let us know to find more like it for you!