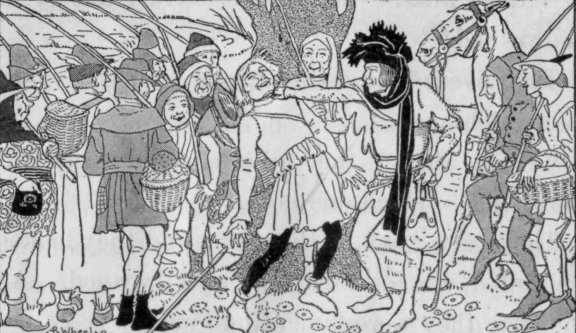 Once upon a time there were some wise men who lived in Gotham. Listen and you will hear how wise they were.

Twelve of these wise men went fishing one day. Some went into the stream and some stayed on dry ground. They caught many fish and had a good time.

As they came home, one of the men said, "We have risked much wading in that stream. I pray God no one of us is drowned."

"Why, one of us might be! Who knows?" cried another. "Let's see about it. Twelve of us went fishing this morning. We must count and see if twelve are returning."

So one man counted, "One, two, three, four, five, six, seven, eight, nine, ten, eleven." And he did not count himself!

"Woe be unto us! Let me count," said another. And he did not count himself.

Then every man counted, and each one failed to count himself.

They went back to the shore, and they looked up and down for him that was drowned. All the time they were lamenting loudly.

A courtier came riding by. "What are you seeking?" he asked, "and why are you so sorrowful?"

"Oh," said they, "this day we came to fish in the stream. There were twelve of us, but one is drowned."

"Why," said the courtier, "count yourselves and see how many there be."

Again they counted, and again each man failed to count himself.

"Well, this is sad," said the courtier, who saw how the mistake had been made. "What will you give me if I find the twelfth man?"

"Sir," cried all together, "you may have all the money we own."

"Give me the money," said the courtier.

Then he began to count. He gave the first man a whack over the shoulders and said, "There is one."

He gave the next a whack and said, "There is two." And so he counted until he came to the last man. He gave this one a sounding blow, saying, "And here is the twelfth."

"God bless you!" cried all the company. "You have found our neighbor."

If you use Facebook or Google+ & enjoyed Wise Men Of Gotham, please tell your friends and let us know to find more like it for you!