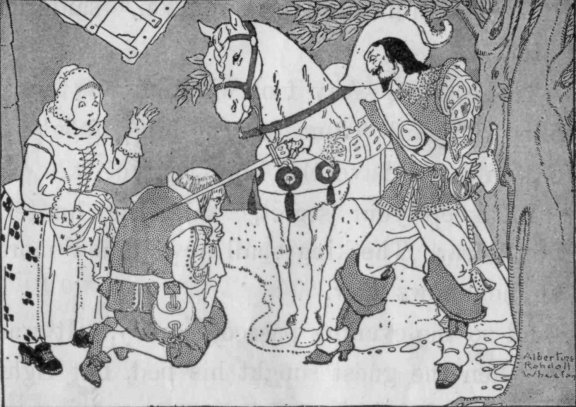 A hunter who had ridden ahead in the chase was lost. The sun went down, and darkness fell upon the forest. The hunter blew his horn, but no answer came. What should he do?

At last he heard the sound of horse's hoofs. Some one was coming. Was it friend or foe? The hunter stood still, and soon a miller rode out into the moonlight.

"Pray, good fellow, be so kind as to tell me the way to Nottingham," said the hunter.

"Nottingham? Why should you be going to Nottingham? The king and his court are there. It is not a place for the like of you," replied the miller.

"Well, well, perhaps you are right, good miller," said the hunter. "And yet who knows? I'll wager that the king is no better man than I am. However, it is getting late, and lodging I must have. Will you give me shelter for the night?"

"Nay, nay, not so fast," said the miller. "Stand forth and let me see if you are a true man. Many thieves wear fine clothes these days."

The hunter stepped forward. "Well, and what do you think of me?" he asked gayly. "Will you not give a stranger lodging?"

"How do I know that you have one penny in your purse?" asked the miller. "You may carry your all on your back, for aught I know. I've heard of lords who are like that."

"True, good miller, but I have gold. If it be forty pence, I will pay it," said the hunter.

"If you are a true man, and have the pence, then lodging you may have. My good wife may not like it, but we'll see," said the miller.

"Nay, nay, not so fast," replied the miller. "I must know you better before I shake hands. None but an honest man's hand will I take."

"Some day, my good miller," replied the hunter, "I hope to have you take my hand in yours. Proud will I be when the day comes."

And so to the miller's house they went. The miller again looked at the stranger and said, "I like his face well. He may stay with us, may he not, good wife?"

"Yes, he is a handsome youth, but it's best not to go too fast," said the good wife. "He may be a runaway servant. Let him show his passport, and all shall be well."

The hunter bowed low, and said, "I have no passport, good dame, and I never was any man's servant. I am but a poor courtier who has lost his way. Pray give me lodging for the night. Your kindness I will surely repay."

Then the wife whispered to the miller, "The youth is of good manners and to turn him out would be sin."

"Yea, a well-mannered youth - and one who knows his betters when he sees them," the miller replied. "Let the lad stay."

"Well, young man," said the wife, "you are welcome here; and well lodged you shall be, though I do say it myself. You shall have a fresh bed with good brown sheets."

"Aye," said the miller, "and you shall sleep with our own son Richard."

Then they all sat down to supper - such a supper: pudding, apple pie, and good things of all kinds. Then at a wink from the miller, the wife brought out a venison pasty.

"Faith!" cried the hunter, "I never before ate such meat."

"Pshaw!" said Richard. "We eat this every day."

"Oh, never a penny pay we. In merry Sherwood Forest we find it. Now and then, you see, we make bold with the king's deer."

"Then I think that it is venison," said the hunter.

"To be sure. Any fool would know that," replied Richard; "but say nothing about it. We would not have the king hear of it."

"I'll keep your secret," said the hunter. "Don't fear. The king shall never know more than he knows now."

And so the evening passed merrily. It was late when the guest sought his bed, but right soundly did he sleep.

The next morning the miller, the good wife, and Richard came out to see the hunter on his way. Just then a party of nobles rode up.

"There's the king!" cried one.

"Pardon, your majesty!" cried another, and all fell upon their knees before the hunter.

The miller stood shaking and quaking, and for once his wife could not speak. The king, with a grave face, drew his sword, but not a word did he say.

The terrified miller threw himself at his ruler's feet, crying out for mercy. Again the sword was raised, and down it fell, but lightly, upon the miller's shoulder, and the king said:

"Your kind courtesy I will repay; so I here dub thee Knight. Rise, Sir John of Mansfield."

If you use Facebook or Google+ & enjoyed The Miller's Guest, please tell your friends and let us know to find more like it for you!