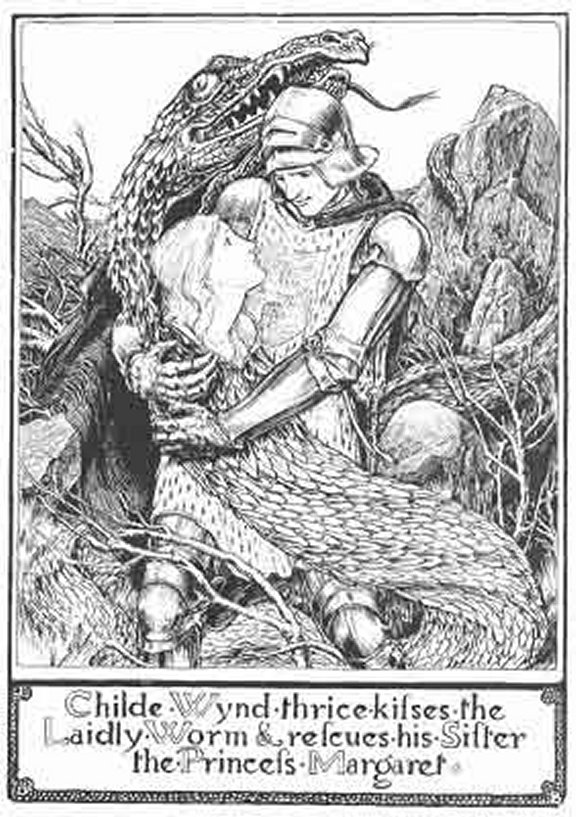 In Bamborough Castle once lived a king who had a fair wife and two children, a son named Childe Wynd and a daughter named Margaret. Childe Wynd went forth to seek his fortune, and soon after he had gone the queen his mother died. The king mourned her long and faithfully, but one day while he was hunting he came across a lady of great beauty, and fell so much in love with her that he determined to marry her. So he sent word home that he was going to bring a new queen to Bamborough Castle.

Princess Margaret was not very glad to hear of her mother's place being taken, but she did not repine, but did her father's bidding, and at the appointed day came down to the castle gate with the keys all ready to hand over to her stepmother. Soon the procession drew near, and the new queen came towards Princess Margaret, who bowed low and handed her the keys of the castle. She stood there with blushing cheeks and eyes on ground, and said: 'O welcome, father dear, to your halls and bowers, and welcome to you, my new mother, for all that's here is yours,' and again she offered the keys. One of the king's knights who had escorted the new queen cried out in admiration: 'Surely this Northern princess is the loveliest of her kind.' At that the new queen flushed up and cried out: 'At least your courtesy might have excepted me,' and then she muttered below her breath: 'I'll soon put an end to her beauty.'

That same night the queen, who was a noted witch, stole down to a lonely dungeon wherein she did her magic and with spells three times three, and with passes nine times nine she cast Princess Margaret under her spell. And this was her spell:

So Lady Margaret went to bed a beauteous maiden, and rose up a Laidly Worm. And when her maidens came in to dress her in the morning they found coiled up on the bed a dreadful dragon, which uncoiled itself and came towards them. But they ran away shrieking, and the Laidly Worm crawled and crept, and crept and crawled till it reached the Heugh or rock of the Spindleston round which it coiled itself, and lay there basking with its terrible snout in the air.

Soon the country round about had reason to know of the Laidly Worm of Spindleston Heugh. For hunger drove the monster out from its cave and it used to devour everything it could come across. So at last they went to a mighty warlock and asked him what they should do. Then he consulted his works and familiar, and told them: 'The Laidly Worm is really the Princess Margaret and it is hunger that drives her forth to do such deeds. Put aside for her seven kine, and each day as the sun goes down, carry every drop of milk they yield to the stone trough at the foot of the Heugh, and the Laidly Worm will trouble the country no longer. But if ye would that she be borrowed to her natural shape, and that she who bespelled her be rightly punished, send over the seas for her brother, Childe Wynd.'

All was done as the warlock advised; the Laidly Worm lived on the milk of the seven kine, and the country was troubled no longer. But when Childe Wynd heard the news, he swore a mighty oath to rescue his sister and revenge her on her cruel stepmother. And three-and-thirty of his men took the oath with him. Then they set to work and built a long ship, and its keel they made of the rowan-tree. And when all was ready, they out with their oars and pulled sheer for Bamborough Keep.

But as they got near the keep the stepmother felt by her magic power that something was being wrought against her, so she summoned her familiar imps and said: 'Childe Wynd is coming over the seas; he must never land. Raise storms, or bore the hull, but nohow must he touch the shore.' Then the imps went forth to meet Childe Wynd's ship, but when they got near they found they had no power over the ship, for its keel was made of the rowan-tree. So back they came to the queen witch, who knew not what to do. She ordered her men-at-arms to resist Childe Wynd if he should land near them, and by her spells she caused the Laidly Worm to wait by the entrance of the harbour.

As the ship came near, the Worm unfolded its coils, and, dipping into the sea, caught hold of the ship of Childe Wynd, and banged it off the shore. Three times Childe Wynd urged his men on to row bravely and strong, but each time the Laidly Worm kept it off the shore. Then Childe Wynd ordered the ship to be put about, and the witch-queen thought he had given up the attempt. But instead of that, he only rounded the next point and landed safe and sound in Buddle Creek, and then, with sword drawn and bow bent, rushed up, followed by his men, to fight the terrible Worm that had kept him from landing.

But the moment Childe Wynd had landed, the witch-queen's power over the Laidly Worm had gone, and she went back to her bower all alone, not an imp, nor a man-at-arms to help her, for she knew her hour was come. So when Childe Wynd came rushing up to the Laidly Worm it made no attempt to stop him or hurt him, but just as he was going to raise his sword to slay it, the voice of his own sister Margaret came from its jaws, saying:

O, quit your sword, unbend your bow,
And give me kisses three;
For though I am a poisonous worm,
No harm I'll do to thee.

Childe Wynd stayed his hand, but he did not know what to think if some witchery were not in it. Then said the Laidly Worm again:

O, quit your sword, unbend your bow,
And give me kisses three;
If I'm not won ere set of sun,
Won never shall I be.

Then Childe Wynd went up to the Laidly Worm and kissed it once; but no change came over it. Then Childe Wynd kissed it once more; but yet no change came over it. For a third time he kissed the loathsome thing, and with a hiss and a roar the Laidly Worm reared back and before Childe Wynd stood his sister Margaret. He wrapped his cloak about her, and then went up to the castle with her. When he reached the keep, he went off to the witch-queen's bower, and when he saw her, he touched her with a twig of a rowan-tree. No sooner had he touched her than she shrivelled up and shrivelled up, till she became a huge ugly toad, with bold staring eyes and a horrible hiss. She croaked and she hissed, and then hopped away down the castle steps, and Childe Wynd took his father's place as king, and they all lived happy afterwards.

But to this day a loathsome toad is seen at times haunting the neighbourhood of Bamborough Keep, and the wicked witch-queen is that Laidly Toad. 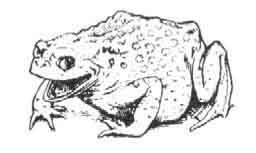 If you use Facebook or Google+ & enjoyed The Laidly Worm Of Spindleston Heugh, please tell your friends and let us know to find more like it for you!