HomeContactPrivacyAboutLinksSitemap
Back To Dutch Fairy Tales
Back To This Week's Tales

When the cow came to Holland, the Dutch folks had more and better things to eat. Fields of wheat and rye took the place of forests. Instead of acorns and the meat of wild game, they now enjoyed milk and bread. The youngsters made pets of the calves and all the family lived under one roof. The cows had a happy time of it, because they were kept so clean, fed well, milked regularly, and cared for in winter.

By and by the Dutch learned to make cheese and began to eat it every day. They liked it, whether it was raw, cooked, toasted, sliced, or in chunks, or served with other good things. Even the foxes and wild creatures were very fond of the smell and taste of toasted cheese. They came at night close to the houses, often stealing the cheese out of the pantry. When a fox would not, or could not, be caught in a trap by any other bait, a bit of cooked cheese would allure him so that he was caught and his fur made use of.

When the people could not get meat, or fish, they had toasted bread and cheese, which in Dutch is "geroostered brod met kaas." Then they laughed, and named the new dish after whatever they pretended it was. It was just the same, as when they called goodies, made out of flour and sugar, "nuts," "fingers," "calves" and "lambs." Even grown folks love to play and pretend things like children.

Soon, it became the fashion to have cheese parties. Men and women would sit around the fire, by the hour, nibbling the toast that had melted cheese poured over it. But after they had gone to bed, some of them dreamed.

Now some dreams may be pleasant, but cheese-dreams were not usually of this sort. The dreamer thought that a big she-horse had climbed upon the bed and sat down upon his stomach. Once there, the beast grinned hideously, snored, and pressed its hoofs down on the sleeper's breast, so that he could not breathe or speak. The feeling was a horrible one; but, just when the dreamer expected to choke, he seemed to jump off some high place, and come down somewhere, very far off. Then the animal ran away and the terrible dream was over.

This was called a nightmare, or in Dutch a "nacht merrie." "Nacht" means night, and "merrie" a filly or a mare. In the dream, it was not a small or a young horse, but always a big mare that squatted down on a man's stomach.

In those days, instead of seeking for the trouble inside, or asking whether there was any connection between nightmares and too hearty eating of cheese, the Dutch fathers laid it all on the goblins.

The goblins, or sooty elves, that used to live in Holland, were ugly, short fellows, very smart, quick in action and able to travel far in a second. They were first cousins to the kabouters. They had big heads, green eyes and split feet, like cows. They were so ugly, that they were ordered to live under ground and never come out during the day. If they did, they would be turned to stone.

The goblins had a bad reputation for mischief. They liked to have fun with human beings. They would listen to the conversation of people and then mock them by repeating the last word. That is the reason why echoes were called "week klank," or dwarf's talk.

Because these goblins were short, they envied men their greater stature and wanted to grow to the height of human beings. As they were not able of themselves to do this, they often sneaked into a house and snatched a child out of the cradle. In place of the stolen baby, one of their own wizened children was laid. That was the reason why many a poor little baby, that grew puny and thin, was called a "wiseel-kind," or changeling. When the sick baby could not get well, and medicine or care seemed to do no good, the mother thought that the goblins had taken away her own child.

It was only the female goblins that would change themselves into night mares and sit on the body of the dreamer. They usually came in through a hole or a crack; but if that person in the house could plug up the hole, or stop the crack, he could conquer the female goblin, and do what he pleased with her. If a man wanted to, he could make her his wife. So long as the hole was kept stopped up, by which the goblin entered, she made a good wife. If this crack was left open, or if the plug dropped out of the hole, the she-goblin was off and could never be found again.

The ruler of the goblins lived beneath the earth, as the king of the underworld. His palace was made of gold and glittered with gems. He had riches more than men could count. All the goblins and kabouters, who worked in the mines and at the forges and anvils, making swords, spears, bells, or jewels, obeyed him.

The most wonderful things about these dwarfs was the way in which they made themselves invisible, so that men were able to see neither the night mares nor the male goblins, while at their mischief. This was a little red cap which every goblin possessed, and which he was careful never to lose. The red cap acted like a snuffer on a candle, to put it out, and while under it, no goblin could be seen by mortal eyes.

Now it happened that one night, as a dear old lady lay dying on her bed, a middle-sized goblin, with his red cap on, came in through a crack into the room, and stood at the foot of her bed. Just for mischief and to frighten her by making himself visible, he took off his red cap.

When the old lady saw the imp, she cried out loudly:

But the goblin dwarf only laughed at her, with his green eyes.

Calling her daughter Alida, the old lady whispered in her ear:

"Bring me my wooden shoes."

Rising up in her bed, the old lady hurled the heavy klomps, one after the other, at the goblin's head. At this, he started to get out through the crack, and away, but before his body was half out, Alida snatched his red cap away. Then she stuck a needle in his cloven foot that made him howl with pain. Alida looked at the crack through which he escaped and found it quite sooty.

Twirling the little red cap around on her forefinger, a brilliant thought struck her. She went and told the men her plan, and they agreed to it. This was to gather hundreds of farmers and townfolk, boys and men together, on the next moonlight night, and round up all the goblins in Drenthe. By pulling off their caps, and holding them till the sun rose, when they would be petrified, the whole brood could be exterminated.

So, knowing that the goblin would come the next night, to steal back his red cap, she left a note outside the crack, telling him to bring several hundred goblins to the great moor, or veldt. There, at a certain hour near midnight, he would find the red cap on a bush. With his companions, he could celebrate the return of the cap. In exchange for this, she asked the goblin to bring her a gold necklace.

The moonlight night came round and hundreds of the men of Drenthe gathered together. They were armed with horseshoes, and with witch-hazel and other plants, which are like poison to the sooty elves. They had also bits of parchment covered with runes, a strange kind of writing, and various charms which are supposed to be harmful to goblins. It was agreed to move together in a circle towards the centre, where the lady Alida was to hang the red cap upon a bush. Then, with a rush, the men were to snatch off all the goblins' caps, pulling and grabbing, whether they could see, or even feel anything, or not.

The placing of the red cap upon the bush in the centre, by the lady Alida, was the signal.

So, when the great round-up narrowed to a small space, the men began to grab, snatch and pull. Putting their hands out in the air, at the height of about a yard from the ground, they hustled and pushed hard. In a few minutes, hundreds of red caps were in their hands, and as many goblins became visible. They were, indeed, an ugly host.

Yet hundreds of other goblins escaped, with their caps on, and were still invisible. As they broke away in groups, however, they were seen, for in each bunch was one or more visible fellow, because he was capless. So the men divided into squads, to chase the imps a long distance, even to many distant places. It was a most curious night battle. Here could be seen groups of men in a tussle with the goblins, many more of which, but by no means all, were made capless and visible. 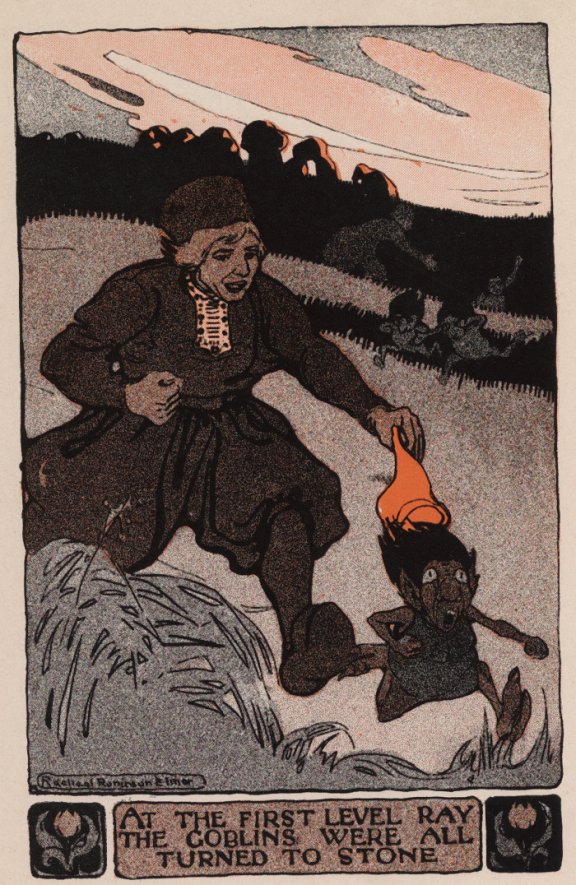 The racket kept up till the sky in the east was gray. Had all the goblins run away, it would have been well with them. Hundreds of them did, but the others were so anxious to help their fellows, or to get back their own caps, fearing the disgrace of returning head bare to their king, and getting a good scolding, that the sun suddenly rose on them, before they knew it was day.

At the first level ray, the goblins were all turned to stone.

The treeless, desolate land, which, a moment before, was full of struggling goblins and men, became as quiet as the blue sky above. Nothing but some rounded rocks or stones, in groups, marked the spot where the bloodless battle of imps and men had been fought.

There, these stones, big and little, lie to this day. Among the buckwheat, and the potato blossoms of the summer, under the shadows and clouds, and whispering breezes of autumn, or covered with the snows of winter, they are seen on desolate heaths. Over some of them, oak trees, centuries old, have grown. Others are near, or among, the farmers' grain fields, or, not far from houses and barn-yards. The cows wander among them, knowing nothing of their past. And the goblins come no more.

If you use Facebook or Google+ & enjoyed The Goblins Turned To Stone, please tell your friends and let us know to find more like it for you!