Little Hilda Peterson sat by a table in her mother's room studying her spelling lesson. Suddenly she startled her mother by giving the table a sharp rap with her pencil and saying:

"What a queer name for a day! Why didn't the people who named the days give them numbers instead of names? I can never remember how to spell Wednesday. What is the use of the third letter in it?"

"My little girl, when you have finished your lesson I will tell you a story; then I think you will always remember where the fourth day got its name."

It did not take Hilda many minutes to finish her studying, with the promise of a story before her.

This is the old Norse tale her mother told:

"Long years ago, before our fatherland, Norway, became a Christian country, our people were taught that they must worship many gods. Nearly all of these they feared; a very few they loved. The greatest was Woden. When little children looked at the moon and stars, they were told that Woden made them. When they asked about the clouds, everyone said, 'Woden made them.'

"In the spring they were told that Woden made the leaves come and the flowers open. No one knew the true God then. Everyone said that Woden lived in a beautiful city in the sky, north of our own Northland. All the houses there were gold and silver, and the most splendid one was Woden's royal palace. This was called Valhalla. To reach it one had to ride or walk the whole length of the rainbow, as it arched from land to land. But there was a sharp-eyed watchman at the gate who stopped anyone who had no right to cross that seven-hued bridge.

"In Valhalla, Woden's people were always happy. They were never sick; they never died. There were no little girls and no little boys in this golden palace, only soldiers; and some of these were women! Woden often sent his shield-maidens, as they were called, to battlefields to carry to Valhalla the souls of brave men. When the choosers of the slain rode through the air, their glittering, shining robes and spears, and their swift horses made a strange, bright light in the North. People called it Northern Lights, but Woden knew it was his Valkyrias. Did you ever see them?

"In another palace of gold in this beautiful city of the northern sky were Woden's wife and family. This palace was called Fensalir. Woden's wife was Frigga and his eldest son was Thor. I must tell you about this son. Thor owned three precious things. Can you guess what they were?

"One was a red-hot iron hammer. When he threw it at a mountain the rocks split open wide and all the Frost Giants who lived within the rocks and upon the mountain were killed.

"The second thing was a wonderful belt. When he put it on he was twice as strong as before.

"The third was a pair of iron gloves. When he put these on he could throw his hammer twice as far.

"There is a story told of how Thor once threw his hammer so far that it could not return as it had always done. It fell near an immense giant who seized it and hid it half a mile deep under the rocks. Thor sent the God of Fire to win it back, but the cruel giant would not give it up unless Thor would bring Freya, the loveliest of the goddesses, to marry him. But Freya refused to go and live with a fierce giant.

"Thor wanted his hammer. At last the God of Fire, who had seen this giant, told Thor to dress himself like Freya and to put on a heavy veil. He did this and the two gods rode far away, on the rays of the setting sun, to recover the lost hammer.

"When the giant saw them he took them to his house. At supper time he wondered how a goddess could eat so much, for Thor devoured eight great salmon and a whole roasted ox. Then he wondered how she could drink so much, for Thor drank three hogsheads of honey wine. Then the giant pulled the heavy veil aside and wondered what made her eyes like fireballs. The God of Fire explained everything, for Thor would not speak. Then the hammer was asked for. It was laid in the mock bride's lap. As soon as Thor had it in his hand he stood up, slew all the giants and utterly destroyed the wicked town. Then he went back to Fensalir and told Frigga, his mother, how he had recovered his hammer.

"Frigga was as powerful as Woden or Thor. All things which Woden had made obeyed her, nor dared harm anything when she forbade them. It may be she did not know of the lost hammer or she would have saved Thor his long journey.

"Frigga was one of the most beautiful creatures the world has ever known. No picture was ever so perfect and beautiful as she. Her robes were lovelier than those of any other goddess. Sometimes they were of gold and scarlet, sometimes of purest white, and many times of modest green. She loved to spin, and no spider ever spun so fine a thread as she on her spinning wheel. She worked so faithfully that Woden changed the wheel into shining stars, and when you look up at Orion again remember that the Norse people called that constellation Frigga's distaff.

"And now, Hilda, these three, Woden, Thor, and Frigga, still live upon our earth and are bound by loving ties. Strange to say, however, they can never meet again, for only one comes to earth at a time. At midnight, Woden, the father, leaves, and Thor, his son, stays with us till another midnight. Then Frigga, the mother, comes for a single day, but she never can see again her son nor her husband. 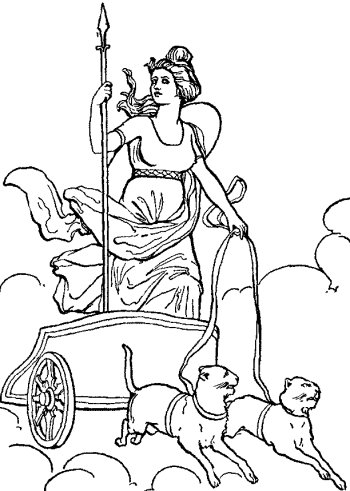 "Does Hilda guess what my story means?"

"I am not quite sure, mother; help me a little bit."

"In my story, Hilda, I told for whom three days of our week are named. Can you tell which days?"

"Why, mother, is that it? I know one, that is Woden's day, or Wednesday. Yes, there is Thor's day, or Thursday, but what is the other?"

"Didn't I tell you the mother never could see again her son or her husband? Do you see the meaning now?"

"Yes, you have guessed the three, Hilda. Now, do you see that Thor's day comes when Woden's day goes? And as soon as Thor's day is over, then comes Frigga's day. They come to earth, but never meet."

"Why, how queer it all is! When I say the names of the days of the week, it will seem as if you were telling me the story again."

"And now a little more, Hilda. Do you remember the colors of the robes that Frigga wore?"

"You said she wore green or white robes, or sometimes scarlet and gold. Her dresses must have been very beautiful."

"Look out of the window Hilda. What color is the lawn?"

"Why, the grass makes it green."

"What color will it be in winter?"

"Why, white with snow, of course."

"Oh, I know now what you mean by Frigga is the ground, isn't she?"

"Not the ground, but the earth. Woden, with his one all-seeing eye and his mantle of blue and gray, is the sky, and Thor, with his streaming red beard and his crashing hammer, is the thunder."

"Oh, mother, how strange it is that such a story should come just from the word Wednesday! I am glad that I am a Norwegian."

If you use Facebook or Google+ & enjoyed Woden, God of the Northern Sky, please tell your friends and let us know to find more like it for you!