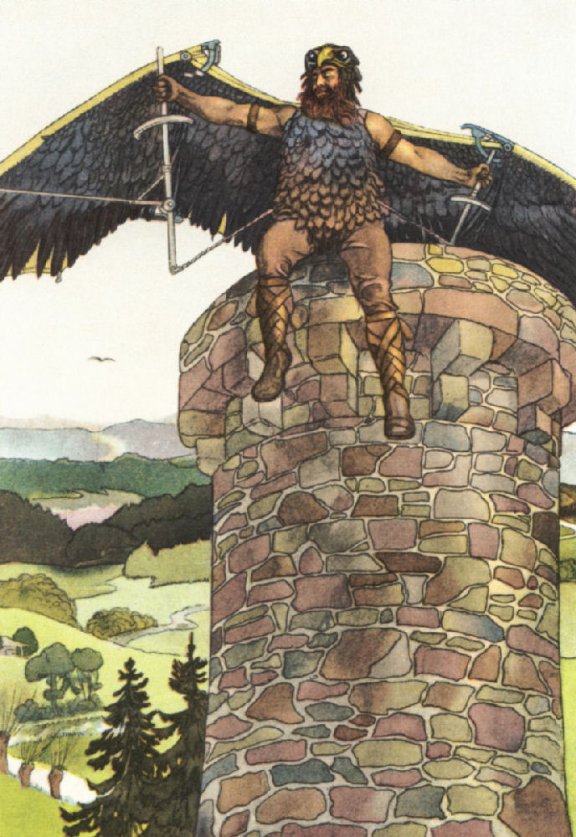 King Nidung had one daughter and three sons. The oldest son, Otvin, was away from court, guarding the outposts of the country; the other two sons were still children.

One day the two boys came with their bows to the great smith Wayland, asking him to make arrows for them.

"Not today," the smith answered. "I have not time; and besides, even though you are the sons of the king, I may not work for you without the wish and consent of your father. If he is willing, you may come again; but you must promise to do exactly as I tell you."

"What is that?" one of the boys ventured.

"You must," said Wayland, "come on a day when snow has freshly fallen, and you must walk facing backward all the way."

The children cared little whether they walked backward or forward, as long as they got their arrows, and so they promised. To their delight next morning they found that snow had fallen. Quickly they set out for the smithy, walking backward all the way.

"O Wayland, make us the arrows," they cried. "The king, our father, has said that we might have them."

But Wayland had no intention of making the arrows, for the king had treated him unjustly and cruelly, and he saw the opportunity for revenge. With his mighty hammer he struck the two children on the head and killed them. Then he threw their bodies into a cave adjoining the smithy.

When the children did not return the castle messengers were sent out to find them. They inquired at the smithy.

"The boys have gone," said Wayland. "I made arrows for them, and no doubt they have gone into the woods to shoot birds."

Returning to the castle the messengers saw the footprints in the snow, and since they pointed toward home, decided that the children must have gone back. But they were not there. Then Nidung sent his servants far and wide throughout the country, and when the boys were nowhere to be found, he concluded that they must have been devoured by wild animals.

When all the searches were over, Wayland brought forth the bodies of the two children, stripped the bones of flesh, whitened them, and made them into goblets and vessels for the king's table, mounting them with silver and gold. The king was delighted with them, and had them placed upon his board whenever there were guests of honor present.

A long time later, Badhild, the king's daughter, while playing with her companions in the garden one day, broke a costly ring that Nidung had given her. She was greatly vexed and feared to tell her father.

"Why not take it to Wayland to mend?" suggested one of her trusted maidens.

So Badhild gave the trinket to the girl and bade her take it to Wayland. She brought it back with her.

"Without the command of the king he will not mend it," she said, "unless the king's daughter herself will come to him."

Badhild set out immediately for the smithy. There Wayland substituted for her ring his own, which had the curious magic power of making its wearer fall in love with the smith.

The smith slipped the jewel on her finger, gazed into her eyes and said, "This ring you shall keep as well as your own, if you will be my bride."

The maiden could not refuse, and so the two were married, agreeing to keep their union a secret.

About this time Eigil, the brother of Wayland, came to the court of Nidung. He was a celebrated man and the most skilful master of the bow to be found anywhere in the world. The king welcomed him, and he remained a long time at the court. One day Nidung proposed that, since he was such a skilful bowman, he should try shooting an apple from the head of his own son. Eigil agreed.

"You may have only one trial," the king said.

So an apple was placed on the head of Eigil's three-year-old son, and Eigil, taking his bow, aimed, and with the first arrow struck the apple in the center, so that it fell from the child's head.

"Why did you have three arrows?" the king asked.

"Sire," replied Eigil, "I will not lie to you. If I had pierced my son with the first arrow, the other two would have pierced you."

The king, strange to say, did not take offense at this speech, but on the contrary showed Eigil still greater favor than he had in the past.

The archer frequently visited his brother Wayland, but Badhild came but seldom to her husband's house. One day the two came together at Wayland's special request. When they were leaving Wayland embraced Badhild and said to her:

"You will be the mother of a boy - your child and mine. It may be that I shall go away from here and never see his face; but you must tell him that I have made for him worthy weapons and stowed them in safety in the place where the water enters and the wind goes out (the forge)."

The next time Wayland saw Eigil he bade him bring to him all kinds of feathers, large and small.

"I wish to make for myself a doublet of feathers," he explained.

Then Eigil shot many birds of prey and brought their feathers to Wayland. From them he made a flying shirt, clad in which he looked more like an eagle than a man.

Eigil admired the workmanship and Wayland asked him to try it.

"How shall I rise, how fly, and how alight?" asked Eigil.

"You must rise against the wind, and fly first low and then high, but you must alight with the wind."

Eigil did as he was told, and had a good deal of trouble in alighting. Finally he knocked his head with such force on the ground that he lost consciousness. When he came to himself Wayland spoke:

"Tell me, brother Eigil, do you like the shirt?"

"If it were as easy to alight as it is to fly," was the answer, "I should fly away and you would never see me again."

"I will alter what is wrong," said the smith, making a slight change in the shirt. Then with Eigil's help he put on the feathers, flapped his wings and rose into the air. He lighted on a turret of the castle and called down to Eigil.

"I did not tell you the truth when I said that you should alight with the wind, for I knew that if you found out how easy it was to fly you would never give me the shirt back again. You can see for yourself that all birds rise against the wind and alight in the same way. I am going home to my own country, but first I must have a few words with Nidung. And, remember, if he bids you shoot me, shoot under the left wing, for there I have fastened a bladder filled with blood."

With these words Wayland flew to the highest tower of the king's castle and called to the king as he passed with his courtiers.

"Are you a bird, Wayland?" asked the king.

"Sometimes I am a bird and sometimes a man," was the reply; "but now I am going away from here and never again will you have me in your power. Listen while I speak. You promised once to give me your daughter and the half of your kingdom, but you made of me instead an outcast - because I defended myself and killed the wretches who would have taken my life.

"You surprised me while I slept and stole my arms and my treasures; and not satisfied with that you laid a net for my feet and made of me a cripple. But I have had my revenge. Do you know where your sons are?"

"I will tell you, but first you must swear to me by the deck of the ship and the edge of the shield, by the back of the horse and the blade of the sword that you will do no harm to my wife and child."

"Go to my smithy, and there in the cave you will find the remains of your sons. I killed them, and of their bones made vessels for your table. Your daughter Badhild is my wife. So have I repaid evil with evil, and our connection is ended."

With these words he flew away, while Nidung in great anger cried: "Eigil, shoot at Wayland."

"I cannot harm my own brother," replied Eigil.

Then Eigil laid an arrow in his bow and shot Wayland as he had been instructed, under his left arm, until the blood flowed and everyone thought that the great smith had received his death wound.

But Wayland, unharmed, flew away to Zealand and made his home there in his father's land.

Nidung, meantime, was sad and unhappy, and it was not long before he died and Otvin, his son, succeeded to the throne.

Otvin was soon loved and honored throughout the kingdom because of his great justice and kindness. His sister lived with him at court, and there her son, Widge, was born.

One day Wayland sent messengers to Otvin, asking for peace and pardon, and when these were granted he traveled again to Jutland and was received with great honor.

The mighty smith was very glad to see his wife again and very proud of his three-year-old son; but he would not yield to Otvin's request that he remain in Jutland. Instead he returned to Zealand with Badhild and Widge, and there they lived happily for many years.

Wayland was known throughout all the world for his knowledge and skill, and his son Widge was a powerful hero, whose praises were much celebrated in song.

So ends the story of Wayland, the great smith of the northern countries.

If you use Facebook or Google+ & enjoyed Wayland The Smith, please tell your friends and let us know to find more like it for you!