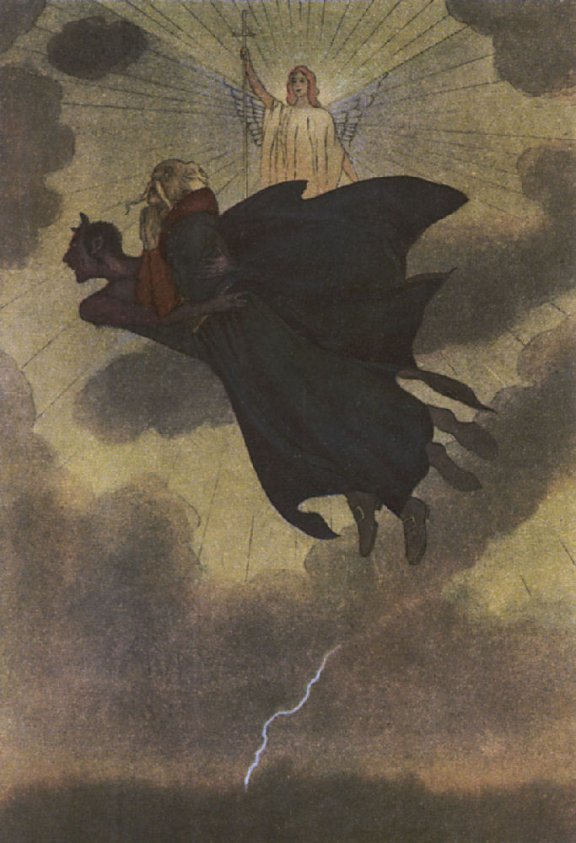 Toward the close of the eighteenth century there was pointed out to visitors in the old town of Krakau the house of the magician Twardowski, who quite properly was called the Faust of Poland, because of his dealings with the Evil One.

In his youth Twardowski had followed the study of medicine, and with such industry, such eagerness and such a clear mind did he practice his profession that it was not long before he was the most celebrated doctor in all Poland. But Twardowski was not satisfied with this. He craved greater and still greater power.

At last one day, as he was reading, he found in an old book of magic that for which he had long been seeking - the formula for summoning the devil. When night came a storm had risen, but caring not for that he hurried away to the lonely mountain Kremenki. There, in a rudely constructed hut, he began his incantations.

Before long there was an earthquake; great rocks were loosened, the ground opened at Twardowski's feet and flames leaped out; and in the flames appeared the Evil One himself, in the form of a man, clad in a red cloak with the well-known pointed red cap.

"What do you wish?" the devil asked.

"The power of your most secret wisdom," was the answer.

"You shall make me the most celebrated of all the learned men of the century, and shall besides give me such happiness as no man has ever enjoyed upon this earth before."

"So be it," said the devil. "But on condition that at the end of seven years I gain possession of your soul."

"You may take me," answered Twardowski, "but only in Rome may you have power over me. Thither, at the end of seven years, will I go."

The devil hesitated over this clause, but thinking of the fun he could have in the holy city, finally agreed. Leaning against the wall of stone he wrote the compact, which Twardowski, making a slight wound in his arm, signed with his own blood.

When Twardowski descended from the mountain and made his way, book under arm, through the valley, he heard the bells in all the towers of the city ringing out clearly and solemnly on the still night air. He listened, wondering at the unaccustomed noise, then hurried into the town, inquiring from every one he met what the occasion was. But no one seemed to have heard the sound.

Then a deep feeling of sadness came over him as he realized the meaning of the bells. They were the funeral knell of his own soul.

When morning came, however, doubts were forgotten, and Twardowski was glad to have the devil at his command. The first thing that he demanded was to have all the silver of Poland gathered together in one place and covered over with great mounds of sand.

Similar requests followed, and it was not long before the devil repented of his bargain. One day it would please Twardowski to fly without wings through the air; on another, to the delight of the crowd, to gallop backward on a cock; on another to float in a boat without a rudder or sail, accompanied by some maiden who for the moment had inflamed his heart. One day, by the use of his magic mirror, he set fire to the castle of an enemy a mile away. This last feat made him greatly feared by people far and wide.

At last the seven years were up. The devil appeared to Twardowski and said:

"Twardowski, the time of our pact is over, and I command you to fulfill your promise and go to Rome."

"What shall I do there?"

"Give me your immortal soul," was the answer.

"Do you think I am a fool?" asked Twardowski.

"You gave me your promise to go to Rome after seven years."

"That I have already done," said Twardowski, "and I did not promise to stay in Rome."

"Noble deceiver!" exclaimed the Evil One.

Then after a struggle the devil vanished and Twardowski returned home.

For over a year he pored incessantly over his books of magic, until at last he found a formula for warding off death. Then he called his disciple Famulus to him and explained that he was going to test the formula.

"You have always obliged me without question," said Twardowski, "and I expect you to now. Take this knife and thrust it into my heart."

"Why are you frightened? I know what I am doing. Take the knife and kill me, as the parchment directs."

"You must," insisted Twardowski.

"No more exclamations. Do as I tell you."

"Strike!" thundered Twardowski, "or I will kill you this instant."

Then Famulus did as he was bid and forced the blade into his master's heart.

Twardowski uttered a low cry, fell, and was soon dead.

Famulus dropped trembling into a chair and covered his face with his hands. Then he remembered that he must read the remainder of the parchment in order to find out what he must do to restore the body to life.

Then he set about the task, severed the limbs of the dead body, and worked and brewed and distilled until the elixir described in the parchment was prepared.

With the elixir he rubbed the members of the master's body, put them together, and laid the corpse in a coffin. This he buried on the following night, explaining to Twardowski's friends that such had been the master's wish.

Now the parchment stated that the body must remain in the grave seven years, seven months, seven days and seven hours; so Famulus could do nothing but wait. At last the time had expired, and on a snowy, cold December night he found his way to the grave. He dug out the coffin, brushed off the snow and earth, opened the casket and found - not the body of Twardowski, but that of a child who lay sleeping in a bed of fragrant violets.

"The child is like Twardowski," Famulus thought, and he gathered him up under his cloak and carried him home. The next morning the child was the size of a twelve-year old; and after seven weeks he was a full-grown man.

Twardowski, who now seemed quite himself, only younger, and stronger, thanked Famulus and resumed again his study of magic. He desired, above all things, to be freed forever from his compact with the devil. This, he read in one of the books, he might do if he would brave the terrors of the underworld.

So Twardowski determined to enter the gates of hell. At his magic speech the ground opened and he began the path of descent. Blue flames lighted the way. Deeper and deeper he went through dark and winding passages. At last he reached the underworld itself, and many awful sights did he behold.

And the farther he went the more frightened did he become. He could not help feeling that the devil had plotted something against him. Finally he found himself in a small room, and cast a hasty glance around, looking for a means of escape.

Seeing a child in a cradle in one corner of the room he seized it hastily, threw his cloak around it, and was about to leave when the door opened and the Evil One entered.

He made a respectful bow and said, "Will you be good enough to go with me now?"

"Why so?" asked Twardowski, obstinately.

"Because of our agreement."

"But," said the magician, "only in Rome have you power over me."

"Yes," replied the devil, "and Rome is the name of this house."

"You think to trick me by a pun; but you cannot. I carry this talisman of innocence," and throwing aside his cloak, he disclosed the sleeping child.

Anger showed in the face of the devil; but he stepped nearer to Twardowski and said softly:

"What are you thinking of, Twardowski? Have you forgotten your promise? The nobleman's word is sacred to him."

Pride awoke in the breast of the magician.

"I must keep my word," he said, laying the child back in the crib, and surrendering himself.

On the shoulders of the devil two wings appeared, like the wings of a bat. He seized Twardowski and flew away with him, mounting higher and higher into the night. The magician was so terrified and suffered such anguish in the clutches of the Evil One that in a few moments he was changed into an old man, but he did not lose consciousness. At last so high were they that cities appeared like flies and Krakau with its mighty turrets like two spiders. Deeply moved, Twardowski looked down upon the scene of all his struggles and all his joys.

But higher and higher they went - higher than any eagle has ever flown - and more lonely and more fearful did it seem to Twardowski. Only occasionally bright stars passed by them, or fiery meteors, leaving a long streak of light behind.

At last they came to the moon, which stared at them with dead eyes. Then a song that Twardowski had read in his mother's hymn book rose to his lips. And as he repeated mechanically the prayer his mother had taught him an angel suddenly appeared and said:

"Satan, let Twardowski go; and you, Twardowski, hang you there between heaven and earth, to atone for your sin until the Last Judgment. Then will you be reunited with your mother in heaven. The prayer which you remembered in your hour of need has saved you."

And so, according to the story, Twardowski is suspended in the vault of heaven to this very day.

If you use Facebook or Google+ & enjoyed Twardowski, please tell your friends and let us know to find more like it for you!