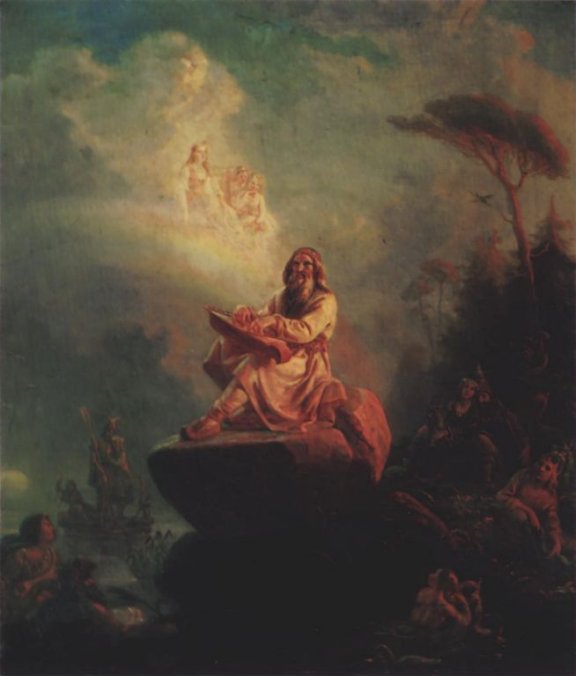 Vanemuine, the god of song, dwelt on the Hill of Taara. But he grew tired of living in Finland and of his beautiful hill, so he sent word for all things to come to him to receive the language they were to speak before he went away to his palace in the sky. As they gathered around him, he opened his lips and sang so sweetly, so softly, that the murmur of his harp strings seemed almost harsh as compared with the music of his rich voice.

The wandering winds who listened afar off caught and remembered only the loudest tones. The sacred stream that flows so softly around the Hill of Taara chose for its language the rustling of the silken garments which moved upon his shoulders as he played.

The listening trees of the forest heard the rushing of his flowing mantle as he descended from his throne on the crest of the hill; and ever since, this has been the language of the tree-tops. If one will sit on the mossy bank of a little brook near by a full-leaved forest, he may even now fancy that Vanemuine is come again to earth.

Some of the larger creatures took up the deeper tones of the heavy harp strings, and their language is now full of these sounds. Others loved the melody of the lighter strings, and this softer music is ever in their voices.

In his great joy Vanemuine sang songs never before heard on the earth, and the listening nightingale caught their meaning, never to forget. When you hear the nightingale pour out its song in the dusk of evening hours, you hear an echo of the song the nightingale heard upon the Hill of Taara.

Vanemuine sang of love and of the beautiful springtime. The happy lark heard and understood, and the sweetest tones of the song she sings over and over with each returning morning. As she soars higher and higher into the clear air, she sings her song, trying to tell the whole world of the love and beauty of which she heard so long ago.

While everything else was being made so happy, the poor fishes were having a sad time. They could not leave the water to go to the Hill of Taara, but they stretched their heads out of the brooks and rivers to their very eyes, yet kept their ears under. So they saw Vanemuine, the song-god, move his lips, but heard nothing, and they did as he did and made no sound. To this day the poor, dumb fishes move their lips, but speak no language.

Only the men and women who stood close around the Hill of Taara understood everything that was sung. That is why human voices more than any others can thrill us and make us see the beautiful and true.

When Vanemuine's songs had been heard by all the world, he rose on the wings of the winds and went far into cloudland to his golden palace in the sky. There he still sings his wonderful songs for those who are greater than mankind.

To this very day the people of Finland think they can sometimes hear Vanemuine's voice when the forest trees sigh in the wind, or the water in the river softly laps against its rocky shore. Perhaps--who knows?--we may hear him, too, if we listen well!

If you use Facebook or Google+ & enjoyed The Voices Of Nature, please tell your friends and let us know to find more like it for you!