The people of Switzerland were not always free and happy as they are today. Many years ago a proud tyrant, whose name was Gessler, ruled over them, and made their lot a bitter one indeed.

One day this tyrant set up a tall pole in the public square, and put his own cap on the top of it; and then he gave orders that every man who came into the town should bow down before it. But there was one man, named William Tell, who would not do this. He stood up straight with folded arms, and laughed at the swinging cap. He would not bow down to Gessler himself.

When Gessler heard of this, he was very angry. He was afraid that other men would disobey, and that soon the whole country would rebel against him. So he made up his mind to punish the bold man.

William Tell's home was among the mountains, and he was a famous hunter. No one in all the land could shoot with bow and arrow so well as he. Gessler knew this, and so he thought of a cruel plan to make the hunter's own skill bring him to grief. He ordered that Tell's little boy should be made to stand up in the public square with an apple on his head; and then he bade Tell shoot the apple with one of his arrows. 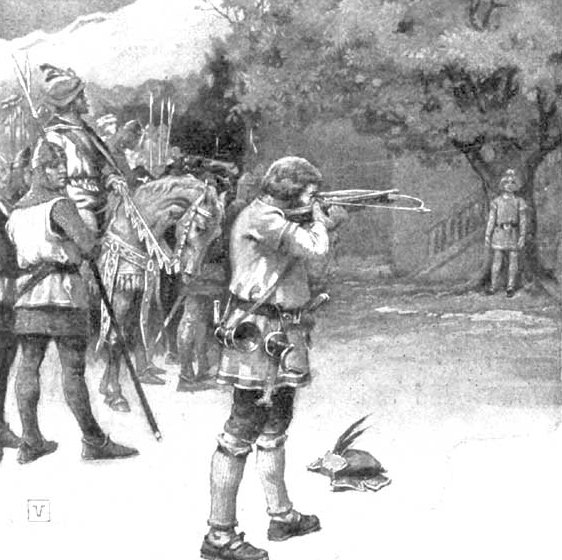 "Will you make me kill my boy?" he said.

"Say no more," said Gessler. "You must hit the apple with your one arrow. If you fail, my soldiers shall kill the boy before your eyes."

Then, without another word, Tell fitted the arrow to his bow. He took aim, and let it fly. The boy stood firm and still. He was not afraid, for he had all faith in his father's skill.

The arrow whistled through the air. It struck the apple fairly in the center, and carried it away. The people who saw it shouted with joy.

As Tell was turning away from the place, an arrow which he had hidden under his coat dropped to the ground.

"Fellow!" cried Gessler, "what mean you with this second arrow?"

"Tyrant!" was Tell's proud answer, "this arrow was for your heart if I had hurt my child."

And there is an old story, that, not long after this, Tell did shoot the tyrant with one of his arrows; and thus he set his country free.

If you use Facebook or Google+ & enjoyed The Story Of William Tell, please tell your friends and let us know to find more like it for you!