Baldur, the youngest brother of Thor, was called The Beautiful. His thoughts were so kind and his ways so pleasant that all who lived in Asgard, the home of the Norse gods, loved him.

Baldur's days were the happiest of all in Asgard, but when he slept his dreams were so strange that his nights were often unhappy.

He feared danger. So Frigga, his mother, who was the wife of Woden, went to the sea and made it promise that no water should drown Baldur.

She went to the stones and made them promise not to harm her son.

Everything promised to let no evil come upon Baldur the Beautiful.

Iron and all the other metals, rocks, and trees all promised. Birds, beasts, and creeping things all agreed to help and never to hurt Frigga's youngest son.

Woden, his father, went to ask a wise old woman what his son's dreams meant. She was dead, and Woden had to go to the center of the universe to find her. She gave him what help she could, and Woden and Frigga felt that now nothing could hurt their child.

The other gods that lived in Asgard knew that Baldur was safe from all harm. But to prove this and to have a little fun among themselves, they would sometimes use him as a mark at which to throw their spears or darts.

Setting Baldur in the middle of the ring, these gods of Asgard would each throw something at him.

If a stone struck him it would only glance off and never hurt. No arrow could pierce his skin. Nothing harmed him, and Baldur would smile as they played their rough play, for he knew that no one of them would work him any ill.

But Loki was different from all the others in Asgard. He could not endure to have Baldur so loved, and wished that some one could harm him. At last Loki dressed himself up as an old woman and went to Frigga's palace. Kind Frigga took the old woman by the hand and brought her into Fensalir.

Loki, in the shape of the old woman, pretended to be very friendly.

"Do you know what the gods are doing to Baldur when you are not by?" Loki asked.

"Yes, they are proving that all things have kept their promise not to hurt my boy."

"What!" said the old woman, "have all things promised not to hurt Baldur?"

"All things," said Frigga. "All but one little plant that grows on the eastern side of Valhalla. It is called the mistletoe. It is so weak and small that I did not ask it to join with the others. I thought it could harm no one."

The old woman left Fensalir. In a few moments Loki appeared on the eastern side of Valhalla and plucked a bit of mistletoe from an old oak that shaded Woden's palace. No one saw him, for he was as sly as a fox and as tricky. Hiding the mistletoe in his hand, he hurried back to the circle of gods who were seated around Baldur.

One god who was blind sat outside the ring.

"Why don't you join in the sport?" asked the wicked Loki.

"I cannot see where Baldur is; and nothing could or would harm anyone so good," said the blind god.

"I will show you where to sit and you shall have this little sprig that is in my hand to throw. You must not be left out of the sport because you are blind," and Loki handed the mistletoe to him.

The others welcomed the blind god to the ring and made him happy by telling him that Baldur smiled at all of their strokes.

"Let me throw next," said Hodur, the blind god. Loki stood by him and directed his hand as Hodur threw the mistletoe.

Poor Baldur! The mistletoe pierced his heart through and through. He fell backward dead.

Hodur was wild with grief. The other gods knew that the treacherous Loki had done it, and did not blame Hodur. Frigga asked which of the gods would dare to ride to Loki's home to bring Baldur back.

Hermod, called the nimble, an older brother of Baldur, said he would go.

Woden, his father, told him to take the horse Sleipnir. Sleipnir had never carried any one but Woden himself. He had twice as many legs as any other horse. He made eight tracks instead of four.

Hermod mounted Sleipnir and rode fast for nine days and nine nights until he came to the land of Death, where Loki loved to stay. 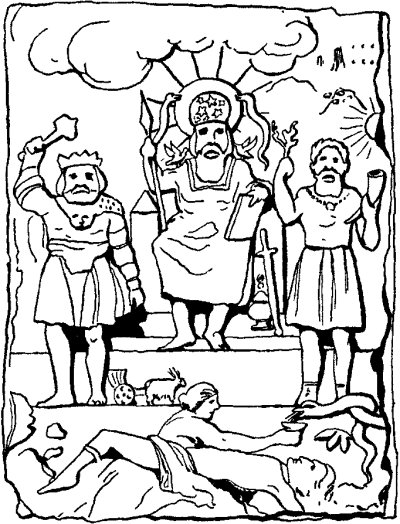 Hela, who ruled there, said Baldur might return if all things above mourned for him.

Hermod rode back and asked all things if Baldur should return. All begged for Baldur but one old hag, who sat on the side of a mountain. Everything else wept for Baldur. Tears stood on the rocks about her as we have seen drops of water on the hardest rock in early morning; the leaves of the trees shed tears of grief. This old hag refused to weep. Baldur could not return.

After the test was over, the gods believed that the old creature on the mountain side was Loki disguised in this way. It must have been the evil Loki, for nothing else could have been so cruel.

Loki met his punishment at last, but that did not save Baldur the Beautiful, the golden-haired god, whom his blind brother, dwelling in darkness, slays again at every even fall.

If you use Facebook or Google+ & enjoyed The Mistletoe, please tell your friends and let us know to find more like it for you!