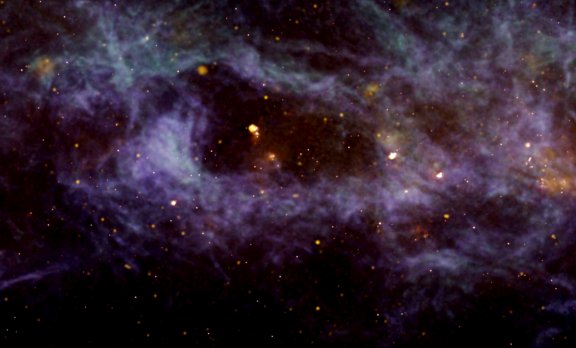 Soon after the world was made, God created a beautiful maiden and gave her charge of all the birds beneath the heavens. Her name was Lindu. Her father's name was Uko. She knew all the birds of passage, and where they should go in autumn, and she sent each flock on its way.

Lindu cared for the birds tenderly, like a mother for her children, and gave them help whenever it was possible. She sent the stormy wind to blow dust into the eyes of the fierce hunters when they were seeking to slay her pets. It was not surprising that all the world loved her, and those who dwelt in the sky most of all.

The North Star wished to make her his wife. He drove up to Uko's palace with a dusky coach drawn by six black horses, and in the coach were ten fine presents. But Lindu did not love him.

"You always stay in one place, and cannot stir from it," said she. "Go back to your watch-tower."

Then came the Moon drawn in a silver coach by ten gray horses, and the Moon brought twenty presents. But Lindu did not love the Moon.

"You change your face too often and not your path, and that will never suit me," she said.

So the Moon drove away wearing his saddest face. Scarcely had the Moon gone before the Sun drove up. He rode in a golden coach drawn by twenty gold-red horses, and he brought thirty presents with him. But all his grandeur went for nothing with Lindu, for she said:

"I do not love you. You follow the same track day by day, just like the Moon. I love the changing seasons, the changing winds, anything that changes."

At that the gold-red horses leaped away and Lindu was alone with her birds.

At length the Northern Light came from his home in the midnight land in a diamond coach drawn by a thousand white horses. He was so grand that Lindu went to the door to meet him. His servants carried a whole coach-load of gold and silver, pearls and jewels into her house. She loved this bright suitor at once.

"You do not travel the same path all the time like the others. You set out when you wish and rest when it pleases you. Each time you wear a new robe, and each time you ride in a new coach with new horses. You shall be my bridegroom."

And Lindu's choice was made.

The news was sent throughout the world, and guests came from the four sides of the sky and of the earth to greet Lindu and the Northern Light. It was agreed that the wedding should be when the birds flew south. Back to his home in the midnight land went the Northern Light, knowing that Lindu loved him best.

The torrent which fell half a thousand feet over the mountain side sent Lindu her bridal veil. The Frost King sent her laces so fine that a breath of summer air would have destroyed them, and they were stored away in a block of ice for safe keeping. The birds brought her robes of butterfly wings softer than silk and more beautiful than velvet. Her sandals were from the wings of the honey bee, stronger than reindeer skin, and fleeter than a chamois' foot.

Spring passed away. Summer came and went. The birds flew south, and Lindu waited for the Northern Light's return. Snow sparkled on the earth, but no hoof-beat of his thousand white horses broke the stillness of the midnight air. Spring came, but never the Northern Light.

Then Lindu began to weep, and from her tears sprang the little brooks in the valleys of Earth. The birds flew about her head and rested on her shoulders. They tried to caress her in a hundred ways, but Lindu did not heed them. Then they flew away and wandered in strange places, building nests where no nests were ever seen before. Many an egg was lost and many a nestling stolen because Lindu was not near to help her birds.

At last Uko heard their sad songs and then saw his daughter's grief. Uko's heart was always merry and his hands so full of work that he had not noticed Lindu's trouble. He ordered the Four Winds to lift her gently and bring her to him in his sky palace.

She dressed herself in her bridal veil, her frosted laces, and robes of butterfly wings, and the four strong Winds lifted her from the ground. The song-birds of Earth gathered about her and sang their sweetest songs. With her white bridal veil streaming far out on the air and a happy smile on her lips, Lindu sailed across the sky to Uko's palace. There she lives now, happy as her father Uko. Her white veil spreads from one end of the heavens to the other, and whoever lifts his eyes to the Milky Way beholds the maiden in her bridal robes.

From there she directs her birds. From there she waves her white hand in greeting to the Northern Light as his thousand horses leap through the sky. She has forgotten his unkindness and her sorrow. The Northern Light still loves her, but is so changeful that he can never keep a promise. Uko has given Lindu her station in the heavens and her work. Forever beautiful and forever young, never changing, she forever smiles at the changeful Northern Light.

If you use Facebook or Google+ & enjoyed The Milky Way, please tell your friends and let us know to find more like it for you!