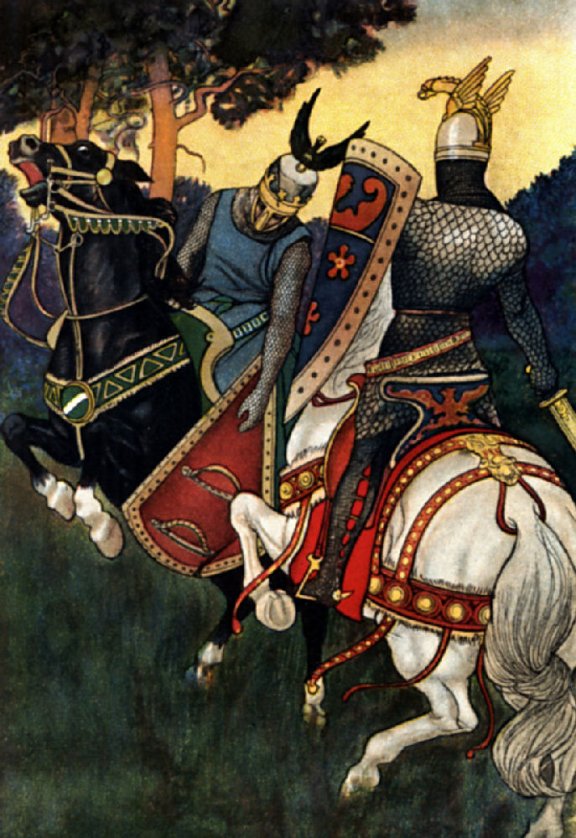 Once upon a time there lived in the Netherlands, in Xante, a wonderful castle on the river Rhine, a mighty king and queen. Siegmund and Sieglinde were their names, and far and wide were they known. Yet their son, the glorious hero Siegfried, was still more widely celebrated. Even as a boy he performed so many daring feats that his bravery was talked of in all German lands.

The two most remarkable of these feats were the slaying of a frightful monster known as the "Dragon of the Linden-tree" and the capture of the rich treasure of the Nibelungs. The hoard was an ancient one and had this wonderful property - that no matter how much was taken from it the quantity was never less.

All this happened before Siegfried reached the age of manhood. When it was time for the youth to be knighted, King Siegmund sent invitations far and wide throughout the country, and a great celebration took place. Siegfried was solemnly girded with a sword and permitted to take his place among the warriors of the kingdom. Then there was a great tournament, a wonderful occasion for Siegfried, who came off victor in every encounter, although many tried warriors matched their skill against his. Altogether the festivities lasted seven whole days.

After the guests had departed, Siegfried asked permission of his parents to travel into Burgundy to seek as bride for himself Kriemhild, the maiden of whose great beauty and loveliness he had heard.

Gunther, the king of Burgundy, recognizing the young hero, went out to meet him and politely inquired the cause of his visit. Imagine his dismay when Siegfried proposed a single combat, in which the victor might claim the land and allegiance of the vanquished. Neither Gunther nor any of his knights would accept the challenge; but Gunther and his brother hastened forward with proffers of unbounded hospitality.

Siegfried lingered a year in Gunther's palace, and though he never caught a glimpse of the fair maid Kriemhild, she often admired his strength and manly beauty from behind the palace windows.

One day a herald arrived from King Ludeger of Saxony and King Ludegast of Denmark, announcing an invasion. Gunther was dismayed; but the brave Siegfried came to the rescue, saying that if Gunther would give him only one thousand brave men he would repel the enemy. This was done and the little army marched into Saxony and routed the twenty thousand valiant soldiers of the enemy's force. All the men did brave work, but Siegfried was the bravest of them all.

When the hero returned, a great celebration was held in his honor, and Kriemhild, Ute and all the ladies of the court were invited to be present at the tournament. It was there that Siegfried first saw the fair maiden. Her beauty was more wonderful than he had ever been able to imagine. What was his delight, then, to learn that he had been appointed her escort.

On the way to the tournament Kriemhild murmured her thanks for the good work Siegfried had done for her, and Siegfried vowed that he would always serve her brothers because of his great love for her.

Soon after the tournament Gunther announced his intention of winning for his wife, Brunhild, the princess of Issland, who had vowed to marry no man but the one who could surpass her in jumping, throwing a stone and casting a spear. Gunther proposed that Siegfried go with him, promising him, in return for his services, the hand of Kriemhild. Such an offer was not to be despised, and Siegfried immediately consented, advising Gunther to take only Hagen and Dankwart with him.

Gunther and the three knights set out in a small vessel. Siegfried bade his companions represent him as Gunther's vassal only; but Brunhild, seeing his giant figure and guessing its strength, imagined that he had come to woo her. She was dismayed, therefore, when she heard that he had held the stirrup for Gunther to dismount. When he entered her hall, she advanced to meet him; but he drew aside, saying that honor was due to his master Gunther.

The combat opened. Brunhild poised her spear and flung it with such force that both heroes staggered; but before she could cry out her victory Siegfried had caught the spear and flung it back with such violence that the princess fell and was obliged to acknowledge defeat.

Undaunted, she caught up a huge stone, flung it far into the distance, and then leaping, alighted beside it. No sooner had she done this than Siegfried seized the stone, flung it still farther, and lifting Gunther by his broad girdle bounded through the air with him and alighted beyond the stone. Then Brunhild knew that she had found her master.

"Come hither all my kinsmen and followers," she said, "and acknowledge my superior. I am no longer your mistress. Gunther is your lord."

The wedding was fitly celebrated and then Gunther and his bride were escorted back to Issland by a thousand Nibelung warriors whom Siegfried had gathered for the purpose. A great banquet was given upon their return, at which the impatient Siegfried ventured to remind Gunther of his promise. Brunhild protested that Gunther should not give his only sister to a menial, but Gunther gave his consent and the marriage took place immediately. The two bridal couples then sat side by side. Kriemhild's face was very happy; Brunhild's was dark and frowning.

You see, Brunhild was not pleased with the husband she had gained and preferred Siegfried. Alone with her husband the first night she bound him with her girdle and suspended him from a corner of her apartment. There she let him hang till morning. Released, Gunther sought out Siegfried and told him of the disgraceful affair.

The following evening Siegfried again donned his cloud cloak and entered the apartments of Gunther and Brunhild. As he entered he blew out the lights, caught Brunhild's hands and wrestled with her until she pleaded for mercy.

"Great king, forbear," she said. "I will henceforth be thy dutiful wife. I will do nothing to anger thee. Thou art my lord and master."

Having accomplished his purpose, Siegfried left the room, but first he took Brunhild's girdle and her ring. These he carried with him when after the festivities he and Kriemhild returned to Xante on the Rhine.

Siegmund and Sieglinde abdicated in favor of their son, and for ten years Siegfried and Kriemhild reigned happily. Then they were invited to pay a visit to Gunther and Brunhild. They accepted, leaving their little son Gunther in the care of the Nibelungs.

Brunhild received Kriemhild graciously, but at heart she was jealous and wanted Kriemhild to acknowledge her as superior. One day they had a hot dispute, Kriemhild declaring that her husband was without peer in the world, and Brunhild retorting that since he was Gunther's vassal he must be his inferior. Kriemhild made an angry avowal that she would publicly assert her rank.

Both queens parted in a rage and proceeded to attire themselves in the most gorgeous costumes they possessed. Accompanied by their ladies-in-waiting they met at the church door. Brunhild bade Kriemhild stand aside while she entered, and Kriemhild would not. A storm of words followed. Finally Kriemhild insulted the other queen by declaring that Brunhild was not a faithful wife.

Brunhild summoned Gunther to defend her, and he sent for Siegfried. The latter publicly swore that his wife had not told the truth and that Brunhild had never loved him or he her.

"This quarrel is disgraceful," he said. "I will teach my wife better manners for the future." Gunther promised to do likewise.

The guests departed, but Brunhild still smarted from the insult and longed for revenge. Hagen, finding her in tears, undertook to avenge her. He continually reminded Gunther of the insult his wife had received. The king at first paid no attention to the insinuations, but at last he consented to an assault on Siegfried.

He asked the great hero to help him in a war which he pretended his old enemy Ludeger was about to bring upon him. Siegfried consented, and Kriemhild, because she loved her husband very deeply, was much troubled. In her distress she confided to Hagen that Siegfried was invulnerable except in one spot, between the shoulder blades, where a lime leaf had rested and the dragon's blood had not touched him.

"Never fear," said Hagen, "I myself will help to protect him. You sew a tiny cross on Siegfried's doublet, just over the vulnerable spot, that I may be the better able to shield him."

Kriemhild promised to obey his instructions, and Hagen departed, well pleased, to carry the news to Gunther.

At last the day came for Siegfried to leave his queen. He talked to her and comforted her and kissed her rosy lips.

"Dear heart," he said, "why all these tears? I shall not be gone long."

When Siegfried joined Gunther's party he was surprised to learn that the rebellion had been quelled and that he was invited to join in a hunt instead of a fray.

So he joined the hunting party. Now Siegfried was as great a hunter as he was a warrior, and while the noonday meal was being prepared he scoured the forest, slew several wild boars, caught a bear alive and in a spirit of mischief turned him loose among the guests. Then, tired and thirsty, he sat down, calling for a drink.

Not a bit of wine was at hand; it had all been carried to another part of the forest. Hagen pointed out a spring near by and Siegfried proposed a race, offering to run in full armor while the others ran without armor or weapons. In spite of the handicap, Siegfried reached the spring first.

Always polite, Siegfried bade his host, Gunther, drink first, while he himself disarmed. Siegfried then stooped over the spring to drink, and as he stooped, Hagen, gliding behind him, drove his spear into his body at the exact spot where Kriemhild had embroidered the fatal mark.

Siegfried struggled to avenge himself, but found nothing but his shield within reach. This he flung with such force at his murderer that it knocked him down. Exhausted by the effort, the hero fell back upon the grass, cursing the treachery of Gunther and Hagen.

Curses soon gave way to thoughts of Kriemhild, however, and overcoming his anger he recommended her to the care of her brother Gunther. Then the great hero died.

The hunting party agreed to carry the body back to Worms and say that they had found it in the forest. But Hagen, bolder than the rest, ordered the bearers to deposit the corpse at Kriemhild's door, where she would see it when she went out for early mass the next morning. As he expected, Kriemhild discovered her dead lord and fell senseless upon him. Recovering, she cried out that he had been murdered: no foeman in a fair fight could have killed the glorious knight.

A great funeral took place and Siegfried's body was laid in state in the cathedral at Worms. Thither many came to view it and to express their sympathy for the widow Kriemhild. The latter, suspecting treachery, refused to listen to Gunther until he promised that all of those present at the hunt should touch the body.

"Blood will flow afresh at the murderer's touch," he said.

One by one the hunters advanced, and when Hagen touched the great warrior's form, lo, the blood flowed again from his wounds. At this the Nibelung warriors wanted to avenge the dead, but Kriemhild would not permit them to interrupt the funeral. So the ceremonies were concluded and Siegfried's body was laid to rest.

If you use Facebook or Google+ & enjoyed The Great Knight Siegfried, please tell your friends and let us know to find more like it for you!