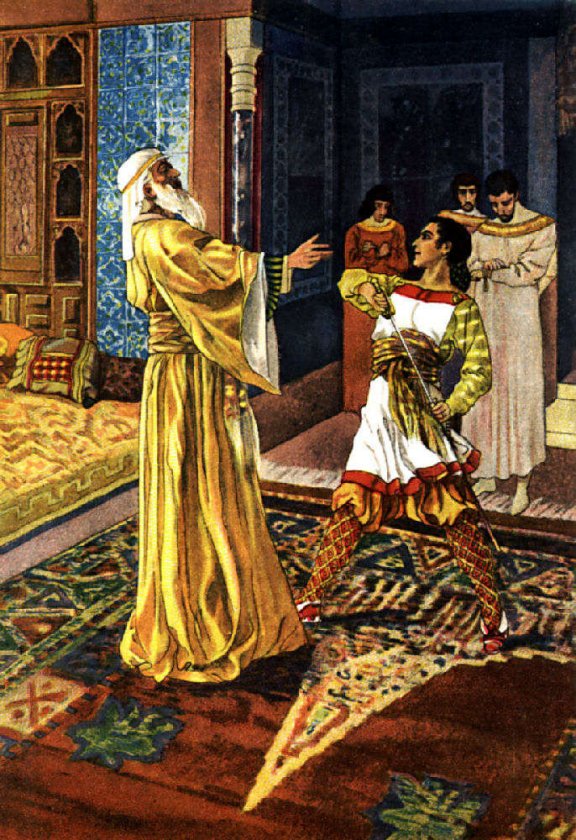 Unlike some of the other heroes told about in this book, the Cid was a real man, whose name was Rodrigo Diaz, or Ruydiez. He was born in Burgos in the eleventh century and won the name of "Cid," which means "Conqueror," by defeating five Moorish kings. This happened after Spain had been in the hands of the Arabs for more than three hundred years, so it is small wonder that the Spaniards looked upon their hero as a very remarkable man.

When Rodrigo was still a youth, his father, Diego Laynez, was grossly insulted by Don Gomez. The custom in those days was to avenge such an insult by slaying the offender; but Diego was too old and feeble to bear arms. When he finally told his son of the wrong, Rodrigo sought out Don Gomez and challenged him to fight. So bravely and skilfully did Rodrigo manage his weapons that he slew his father's enemy. Then he cut off the head and carried it to Diego.

Soon after this Diego bade his son do homage at King Ferdinand's court. Rodrigo appeared before the king, but his bearing was so defiant that Ferdinand was frightened, and banished him.

Rodrigo departed with three hundred followers, encountered some Moors, who were invading Castile, defeated them and took five of their kings captive, releasing them only after they had promised to pay tribute and to refrain from further warfare. It was these kings who first called him "Cid."

In return for his brave service Rodrigo was restored to favor and given place among the king's courtiers.

One day Dona Ximena, daughter of Don Gomez, appeared and demanded justice from the king. Recognizing Rodrigo among the courtiers, she called to him to slay her also. But both demand and cry were unheeded, for the king had been too well served by Rodrigo to listen to any accusation against him.

Three times the maiden returned with the same request, and each time she came she heard greater praise of the young hero. At last she decided to alter her demand. A fourth time she returned, consenting to forego all thoughts of vengeance if the king would order the young hero to marry her. The Cid was very willing, for he had learned to love the girl, admiring her beauty and spirit.

The marriage was celebrated with great pomp and the king gave Rodrigo four cities as a marriage portion. Rodrigo, vowing that he would not be worthy of his wife until he had won five battles, after a pious pilgrimage to the shrine of the patron saint, hastened off to Calahorra, a frontier town claimed by two kings - the kings of Castile and Oregon.

It had been decided that the dispute over the town should be settled by combat. Rodrigo became the champion of Ferdinand of Castile. The other champion, Martin Gonzalez, began, as soon as the combat opened, to taunt the Cid.

"Never again will you mount your favorite steed Babieca," he said, "never will you return to your castle; never will you see your beloved Ximena again."

But the Cid was undaunted, and had soon laid his enemy low. Great praise then was given to the Cid - so great that the knights of Castile were jealous and plotted to kill him. But the Moorish kings whom he had captured and released warned him in time to avert the danger.

Then the Cid aided Ferdinand in defeating the hostile Moors in Estremadura, after a siege of Coimbra lasting seven months. Several other victories over his country's enemies were added to this, and then Rodrigo returned to his beloved wife.

But not for long was he permitted to remain in the quiet of home. Henry III, Emperor of Germany, complained to the Pope that King Ferdinand had refused to acknowledge his superiority. The Pope sent a message to Ferdinand, demanding homage and tribute. The demand angered both Ferdinand and the Cid.

"Never yet have we done homage," cried the Cid, "and shall we now bow to a stranger?"

A proud refusal was then sent to the Pope, and he, knowing of no better way to settle the dispute, bade Henry send a champion to meet Rodrigo. The emperor's champion was, of course, defeated, and all of Ferdinand's enemies were so awed by the outcome of the fight that none ever again demanded homage or tribute. Rodrigo was, indeed, a very useful subject. When Ferdinand died, he was succeeded by his son, Don Sancho. The latter, planning a visit to Rome, selected the Cid to accompany him. Arriving, they found that in the preparations that had been made for their reception a lower seat had been prepared for Don Sancho than for the King of France. The Cid would not suffer such a slight, and became so violent that the Pope excommunicated him. Nevertheless, the seats were made of equal height, and the Cid, who was a good Catholic, humbled himself before the Pope and was forgiven.

It was an age of great wars, and the Cid aided his king in many a brave fight. At last, in the siege of Zamora, the king was treacherously murdered, and, as he had no sons, Don Alfonso, his brother, succeeded. When he arrived at Zamora the Cid refused to acknowledge Alfonso until he should swear that he had no part in the murder. The king, angered by the Cid's attitude, plotted revenge. Opportunity came during a war with the Moors, and the Cid was banished upon a slight pretext.

"I obey, O king," replied the Cid, when he heard the decree. "I am more ready to serve you than you are to reward me. I pray that you may never more in battle need the right arm and sword that so often served your father."

Then the Cid rode away, through a crowd of weeping people, and camped outside of the city until he could make definite plans. The people longed to bring him food or offer him shelter, but they feared the displeasure of the king. One old man, however, crept outside of the city with food, declaring that he cared "not a fig" for Alfonso's commands.

The Cid needed money, and to get it he pledged two locked coffers to some Jews. The Jews in those days were much despised by the Christians, though usually very wealthy. The men, thinking that the boxes contained vast treasures, when in reality they were filled with sand, advanced the Cid 600 marks of gold. Then the hero bade farewell to his wife and children and rode away, vowing that he would return, covered with glory and carrying with him rich spoils.

Within two weeks' time the Cid and his little band of followers had captured two Moorish strongholds and carried off much spoil. The Cid then prepared a truly royal present and sent it to the king. Alfonso, upon receiving the gift, pardoned the Cid, and published an edict permitting all who wished to join in the fight against the Moors to join Rodrigo and his band.

Toledo, thanks to the valor of the Cid, soon fell into the hands of Alfonso, but a misunderstanding arose and the king insulted the Cid. The latter, in great rage, left the army and made a sudden raid on Castile. Then the Moors, knowing that the Cid had departed, took courage and captured Valencia. But the Cid, hearing of the disaster, promptly returned, recaptured the city, and sent a message to Alfonso asking for his wife and daughters. At the same time he sent more than the promised sum of money to the Jews, who up to this time had not learned that the coffers were filled with sand. To the messenger he said:

"Tell them, that although they can find nothing in the coffers but sand, they will find that the pure gold of my truth lies beneath the sand."

As the Cid was now master of Valencia, and of vast wealth, his daughters were sought in marriage by many suitors, and the marriage of both girls was celebrated with great splendor. But the Counts of Carrion, their husbands, were not brave men like the Cid, and after lingering at Valencia in idleness for two years, their weakness was clearly shown.

One evening while the Cid was sleeping, a lion broke loose from his private menagerie and entered the room where he lay. The two princes, who were playing in the room, fled, one in his haste falling into an empty vat, and the other taking refuge behind the Cid's couch. The roaring of the lion wakened the Cid, and jumping up he seized his sword, caught the lion by the mane, led it back to its cage, and calmly returned to his place.

The cowardly conduct of the Counts of Carrion roused the anger of the Cid's followers, and in the siege of Valencia that followed their conduct brought only contempt. When the Moors were finally driven away the counts asked permission to return home with their brides and gifts.

So the Cid parted from his daughters, weeping at the loss. The procession started. The first morning the counts sent their escorts ahead, and, left alone with their wives, stripped them of their garments, beat them and kicked them, and left them for dead. But Felez Munoz, a loyal follower of the Cid's, riding back, found the two wives, bound up their wounds and obtained shelter for them in the house of a poor man whose wife and daughters promised to nurse them. Then he rode on to tell the Cid. The Cid swore that he would be avenged, and as Alfonso was responsible for the marriage, he applied to him for redress.

The king, who had long since forgiven the Cid and learned to value his services, was very angry. A battle was finally arranged. The Counts of Carrion and their uncle were defeated and banished, and the Cid returned in triumph to Valencia. Here his daughters' second marriage took place.

The Moors returned five years later, and the Cid was prepared to meet them when he received a vision of St. Peter, predicting that he would die within thirty days, but that even though dead he would triumph over his enemy. He accordingly made preparations for his death, and after appointing a successor, he gave instructions that none should weep over his death, and that his body when embalmed should be set upon his horse, Babieca, and that, with his sword Tizona in his hand, he should be led on a certain day against the enemy.

The hero died and his successor together with his wife Ximena strove to carry out his instructions. A battle was planned, and the Cid, strapped upon his war horse, rode in the van. The Moors, filled with terror, fled before him.

After the victory the body was placed in the Church of San Pedro de Cardena, where for ten years it remained seated, in plain view of all.

If you use Facebook or Google+ & enjoyed The Cid, please tell your friends and let us know to find more like it for you!