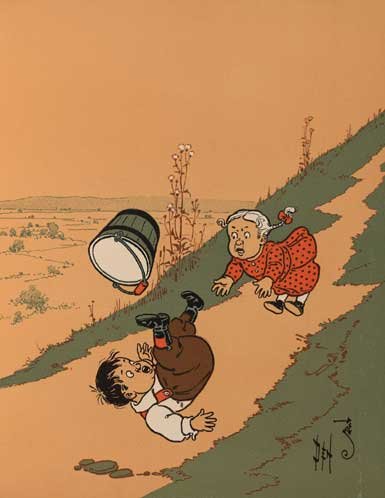 Jack and Jill
Went up the hill
To get a pail of water;
Jack fell down
And broke his crown
And Jill came tumbling after.

That is what your father and mother used to say when they were children. So did your grandfather and grandmother when they were little, and for hundreds of years children have laughed at poor Jack and Jill's mishaps. Now, I will tell you how the story first began.

In Norway, people used to believe that the chariot of the moon was driven by a glorious youth, Mani. He was lonely in heaven. One night a little boy on earth was sent by his parents to a well to get a pail of water. This boy's name was Hjuki. He asked his sister Bil to go with him. They had to carry with them the big bucket fastened to a long pole, for there was no well-sweep. They thrust the pole, with the bucket at the end of it, into the water, and, as they were both busy straining every muscle to raise the bucket, Mani stood beside them and helped them.

To the children he looked like a friendly lad and they were glad of his help.

Bil balanced the pail on the pole and together they started to carry the water home.

The weight was so great on Hjuki's shoulder, for he tried to take the heavier end, that he stumbled and down they both went.

Mani wanted the children's company and so picked them up and carried them through the sky to the mountains of the moon. There you can see them when the moon is full, wandering about, seeking to return, falling and going out of sight, just as they did on earth.

They still carry the bucket and the pole, hoping yet dreading to meet their parents. They fear that their parents think they ran away from their task. But try as hard as they can, Mani keeps them from finding the way back to earth.

If you use Facebook or Google+ & enjoyed Jack And Jill On The Moon Mountains, please tell your friends and let us know to find more like it for you!