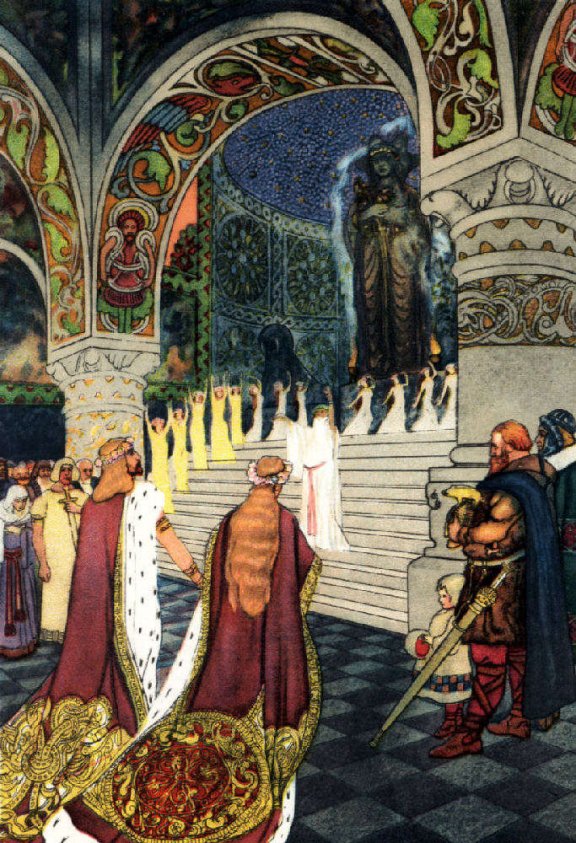 Frithiof was a Norwegian hero, grandson of Viking, who was the largest and strongest man of his time. Viking had sailed the sea in a dragon ship, meeting with many adventures, and Thorsten, Frithiof's father, had likewise sailed abroad, capturing many priceless treasures and making a great name for himself.

Frithiof was entrusted to the care of Hilding, his foster father, and in his care, also, were Halfdan and Helge, King Bele's sons, and, some years later, their little sister, Ingeborg. Frithiof and Ingeborg became firm friends, and as the lad increased in bravery and strength, the girl increased in beauty and loveliness of soul. Hilding, noticing how each day they became fonder of each other, called Frithiof to him and bade him remember that he was only a humble subject and could never hope to wed Ingeborg, the king's only daughter, descended from the great god Odin. The warning, however, came too late, for Frithiof already loved the fair maiden, and vowed that he would have her for his bride at any cost.

Soon after this the king died, leaving his kingdom to his two sons and giving instructions that his funeral mound should be erected in sight of that of his dear friend Thorsten, so that their spirits might not be separated even in death. Then Ingeborg went to live with her brothers, the Kings of Sogn, while Frithiof retired to his own home at Framnas, closed in by the mountains and the sea.

Frithiof was now one of the wealthiest and most envied of land-owners. His treasures were richer by far than those of any king.

In the spring he held a great celebration, which the kings of Sogn and their sister Ingeborg, among many other guests, attended. Frithiof and Ingeborg were much together, and Frithiof was very happy to learn that Ingeborg returned his affection.

Great was his grief when the time came for her to sail away. Not long had she been gone, however, when he vowed to Bjorn, his chief companion, that he would follow after her and ask for her hand. His ship was prepared and soon he touched the shore near the temple of the god Balder.

His request was not granted and Helge dismissed him contemptuously. In a rage at the insult Frithiof lifted his sword; but remembering that he stood on consecrated ground near Bele's tomb, he spared the king, only cutting his heavy shield in two to show the strength of his blade.

Soon after his departure another suitor, the aged King Ring of Norway sought the hand of Ingeborg in marriage, and being refused, collected an army and prepared to make war on Helge and Halfdan.

Then the two brothers were glad to send a messenger after Frithiof, asking his aid. The hero, still angry, refused; but he hastened at once to Ingeborg. He found her in tears at the shrine of Balder, and although it was considered a sin for a man and woman to exchange words in the sacred temple, he spoke to her, again making known his love.

The kings, her brothers, were away at war, but Frithiof stayed near Ingeborg, and when they returned, promised to free them from the oppression of Sigurd Ring if in return they would promise him the hand of their sister. But the kings had heard of how Frithiof had spoken to Ingeborg in the temple, and although they feared Sigurd they would not grant the request. Instead he was condemned in punishment to sail away to the Orkney Islands to claim tribute from the king Angantyr.

Frithiof departed in his ship Ellida, and Ingeborg stayed behind, weeping bitterly. And as soon as the vessel was out of sight the brothers sent for two witches - Heid and Ham - bidding them stir up such a tempest on the sea that even the god-given ship Ellida could not withstand its fury.

But no tempest could frighten the brave Frithiof. Singing a cheery song he stood at the helm, caring nothing for the waves that raged about the ship. He comforted his crew, and then climbed the mast to keep a sharp lookout for danger.

From there he spied a huge whale, upon which the two witches were seated, delighted at the tempest they had stirred up. Speaking to his good ship, which could both hear and obey, he bade it run down the whale and the witches.

This Ellida did. Whale and witches sank; the sea grew red with their blood; the waves were calmed. Again the sun smiled over the hardy sailors. But many of the crew were worn out by the battle with the elements and had to be carried ashore by Frithiof and Bjorn when they reached the Orkney Islands.

Now the watchman at Angantyr's castle had reported the ship and the gale, and Angantyr had declared that only Frithiof and Ellida could weather such a storm. One of his vassals, Atle, caught up his weapons and hurried forth to challenge the great hero.

Frithiof had no weapons, but with a turn of his wrist he threw his opponent.

"Go and get your weapons," Atle said, when he saw that Frithiof would have killed him.

Knowing that Atle was a true soldier and would not run away, Frithiof left him in search of his sword; but when he returned and found his opponent calmly awaiting death, he was generous, and bade him rise and live.

Angantyr vowed that he owed no tribute to Helge, and would pay him none, but to Frithiof he gave a vast treasure, telling him that he might dispose of it as he would.

So Frithiof sailed back to the kings of Sogn, confident that he could win Ingeborg. What was his dismay, therefore, to learn that Helge and Halfdan had already given their sister in marriage to Sigurd Ring. In a rage he bade his men destroy all the vessels in the harbor, while he strode toward the temple of Balder where Helge and his wife were. He flung Angantyr's purse of gold in Helge's face, and seeing the ring he had given to Ingeborg on the hand of Helge's wife snatched it roughly from her. In trying to get it back she dropped the image of the god, which she had just been anointing, into the fire. It was quickly consumed, while the rising flames set fire to the temple.

Horror-stricken, Frithiof tried to stop the blaze, and when he could not, hurried away to his ship.

So Frithiof became an exile, and a wanderer on the face of the earth. For many years he lived the life of a pirate or viking, exacting tribute from other ships or sacking them if they would not pay tribute; for this occupation in the days of Frithiof was considered wholly respectable. It was followed again and again by the brave men of the North.

But Frithiof was often homesick, and longed to enter a harbor, and lead again a life of peace.

At last he decided to visit the court of Sigurd Ring and find out whether Ingeborg was really happy. Landing, he wrapped himself in an old cloak and approached the court. He found a seat on a bench near the door, as beggars usually did; but when one insulting courtier mocked him he lifted the offender in his mighty hand and swung him high over his head.

At this Sigurd Ring invited the old man to remove his mantle and take a seat near him. With surprise Sigurd and his courtiers saw step from the tattered mantle a handsome warrior, richly clad; but only Ingeborg knew who he was.

"Who are you who comes to us thus?" asked Sigurd Ring.

"I am Thiolf, a thief," was the answer, "and I have grown to manhood in the Land of Sorrow."

Sigurd invited him to remain, and he soon became the almost constant companion of the king and queen.

One spring day Sigurd and Frithiof had ridden away on a hunting expedition, and the old king being tired from the chase lay down on the ground to rest, feigning sleep. The birds and beasts of the forest drew near and whispered to Frithiof that he should slay the king and have Ingeborg for his own wife. But Frithiof was too fine and loyal to listen to such suggestions.

"You are Frithiof the Bold," he said, "and from the first I knew you. Be patient now a little longer and you shall have Ingeborg, for my end is near."

Soon after this Sigurd died, commending his wife to the young hero's loving care. And at his own request the funeral feast was closed by the public betrothal of Ingeborg and Frithiof.

The people, admiring his bravery, wanted to make Frithiof king, but he would not listen to their pleadings. Instead he lifted the little son of Sigurd upon his shield.

"Behold your king," he cried, "and until he is grown to manhood I will stand beside him."

So Frithiof married his beloved Ingeborg, and later, so the story runs, he returned to his own country and built again the temple of Balder, more beautiful by far than any before.

If you use Facebook or Google+ & enjoyed Frithiof The Bold, please tell your friends and let us know to find more like it for you!