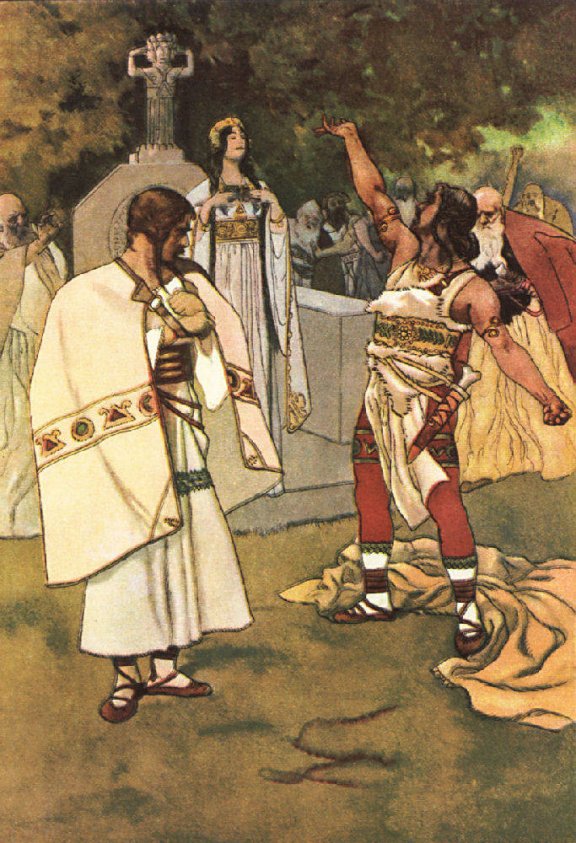 There dwelt once in the neighborhood of Grunberg Castle in Bohemia two brothers - Staglow and Chrudis, of the distinguished family of Klemowita - and these two had fallen into a fierce dispute over the inheritance of their father's lands. The older son Chrudis thought that he should inherit all of the estate - and that is the custom in some countries, you know - while the younger son, Staglow, declared that the property should be equally divided.

Now it happened that a sister of the princess Libuscha Vyched lived at the court. She entreated the princess to settle the quarrel according to law.

The princess yielded to her wish, and decided that the brothers should either inherit their father's estate jointly or divide it into equal shares.

All the lords of the country assembled to hear the rendering of the decision - brave knights from far and near. Chrudis and Staglow, of course, were present, very curious to hear what their princess would decide. Pungel of Hadio, proclaimed far and wide as the bravest of all the knights of Bohemia, was also among the company.

The princess herself rendered the decision, standing in white robes before her people. The two brothers stood near, and scarcely had the last word been uttered when the knight Chrudis, who, as first-born, claimed the estate for himself, sprang excitedly to his feet, mocking and insulting the princess. "Poor people," he said, addressing the assembly, "I am sorry for you who have to be ruled over by a girl."

Deeply grieved, the maiden-princess Libuscha rose, explaining that she would no longer rule alone. She commanded the people to choose her a husband.

"No matter whom you choose," she declared, "I will abide by your decision."

Thereupon the assembled subjects cried out that they would have Pungel of Hadio as prince; and Libuscha, stepping toward him, extended her hand to him in token of her agreement.

Thus did Pungel become the liege lord of the Bohemian nobles.

No one knows how long ago all this happened, for the manuscript that tells the story was very old when it was discovered in the year 1817. It had lain for many, many years among other old documents in the great chests that lined the walls of the courtroom in the ancient Castle Grunberg in Bohemia. The manuscript is now in a great museum in Prague, and perhaps, some day, when you go there, you will see it for yourself.

If you use Facebook or Google+ & enjoyed The Decision Of Libuscha, please tell your friends and let us know to find more like it for you!