In Scotland, in the time of King Robert Bruce, there lived a brave man whose name was Douglas. His hair and beard were black and long, and his face was tanned and dark; and for this reason people nicknamed him the Black Douglas. He was a good friend of the king, and one of his strongest helpers.

There was a large castle in Scotland which the English had taken early in the war. The Scottish soldiers wanted very much to take it again, and the Black Douglas and his men went one day to see what they could do. It happened to be a holiday, and most of the English soldiers in the castle were eating and drinking and having a merry time. But they had left watchmen on the wall to see that the Scottish soldiers did not come upon them unawares; and so they felt quite safe.

In the evening, when it was growing dark, the wife of one of the soldiers went up on the wall with her child in her arms. As she looked over into the fields below the castle, she saw some dark objects moving toward the foot of the wall. In the dusk she could not make out what they were, and so she pointed them out to one of the watchmen.

"Pooh, pooh!" said the watchman. "Those are nothing to frighten us. They are the farmer's cattle, trying to find their way home. The farmer himself is enjoying the holiday, and he has forgotten to bring them in. If the Douglas should happen this way before morning, he will be sorry for his carelessness."

But the dark objects were not cattle. They were the Black Douglas and his men, creeping on hands and feet toward the foot of the castle wall. Some of them were dragging ladders behind them through the grass. They would soon be climbing to the top of the wall. None of the English soldiers dreamed that they were within many miles of the place.

The woman watched them until the last one had passed around a corner out of sight. She was not afraid, for in the darkening twilight they looked indeed like cattle. After a little while she began to sing to her child: 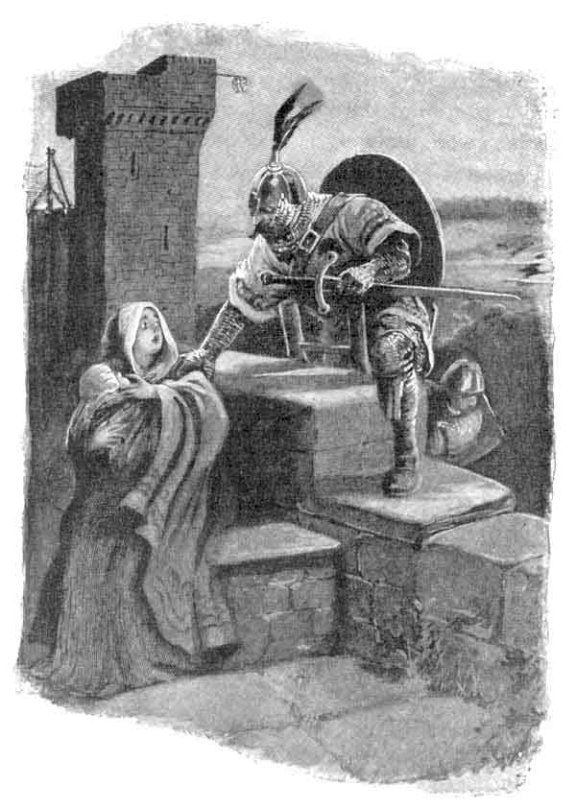 All at once a gruff voice was heard behind her, saying, "Don't be so sure about that!"

She looked around, and there stood the Black Douglas himself. At the same moment a Scottish soldier climbed off a ladder and leaped upon the wall; and then there came another and another and another, until the wall was covered with them. Soon there was hot fighting in every part of the castle. But the English were so taken by surprise that they could not do much. Many of them were killed, and in a little while the Black Douglas and his men were the masters of the castle, which by right belonged to them.

As for the woman and her child, the Black Douglas would not suffer any one to harm them. After a while they went back to England; and whether the mother made up any more songs about the Black Douglas I cannot tell.

If you use Facebook or Google+ & enjoyed The Black Douglas, please tell your friends and let us know to find more like it for you!