A good many years ago there lived in Italy a little boy whose name was Antonio Canova. He lived with his grandfather, for his own father was dead. His grandfather was a stonecutter, and he was very poor.

Antonio was a puny lad, and not strong enough to work. He did not care to play with the other boys of the town. But he liked to go with his grandfather to the stoneyard. While the old man was busy, cutting and trimming the great blocks of stone, the lad would play among the chips. Sometimes he would make a little statue of soft clay; sometimes he would take hammer and chisel, and try to cut a statue from a piece of rock. He showed so much skill that his grandfather was delighted.

"The boy will be a sculptor some day," he said.

Then when they went home in the evening, the grandmother would say, "What have you been doing today, my little sculptor?"

And she would take him upon her lap and sing to him, or tell him stories that filled his mind with pictures of wonderful and beautiful things. And the next day, when he went back to the stoneyard, he would try to make some of those pictures in stone or clay.

There lived in the same town a rich man who was called the Count. Sometimes the Count would have a grand dinner, and his rich friends from other towns would come to visit him. Then Antonio's grandfather would go up to the Count's house to help with the work in the kitchen; for he was a fine cook as well as a good stonecutter.

It happened one day that Antonio went with his grandfather to the Count's great house. Some people from the city were coming, and there was to be a grand feast. The boy could not cook, and he was not old enough to wait on the table; but he could wash the pans and kettles, and as he was smart and quick, he could help in many other ways.

All went well until it was time to spread the table for dinner. Then there was a crash in the dining room, and a man rushed into the kitchen with some pieces of marble in his hands. He was pale, and trembling with fright.

And now all the other servants were in trouble. Was the dinner to be a failure after all? For everything depended on having the table nicely arranged. The Count would be very angry.

Then little Antonio Canova left his pans and kettles, and went up to the man who had caused the trouble.

"If you had another statue, could you arrange the table?" he asked.

"Certainly," said the man; "that is, if the statue were of the right length and height."

"Will you let me try to make one?" asked Antonio "Perhaps I can make something that will do."

"Nonsense!" he cried. "Who are you, that you talk of making statues on an hour's notice?"

"I am Antonio Canova," said the lad.

"Let the boy try what he can do," said the servants, who knew him.

And so, since nothing else could be done, the man allowed him to try.

On the kitchen table there was a large square lump of yellow butter. Two hundred pounds the lump weighed, and it had just come in, fresh and clean, from the dairy on the mountain. With a kitchen knife in his hand, Antonio began to cut and carve this butter. In a few minutes he had molded it into the shape of a crouching lion; and all the servants crowded around to see it.

"How beautiful!" they cried. "It is a great deal prettier than the statue that was broken."

When it was finished, the man carried it to its place.

"The table will be handsomer by half than I ever hoped to make it," he said.

When the Count and his friends came in to dinner, the first thing they saw was the yellow lion.

"What a beautiful work of art!" they cried. "None but a very great artist could ever carve such a figure; and how odd that he should choose to make it of butter!" And then they asked the Count to tell them the name of the artist.

"The servants crowded around to see it." 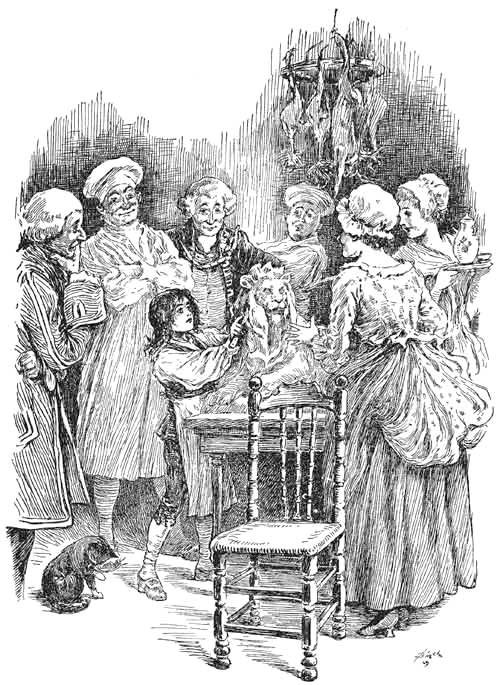 "Truly, my friends," he said, "this is as much of a surprise to me as to you." And then he called to his head servant, and asked him where he had found so wonderful a statue.

"It was carved only an hour ago by a little boy in the kitchen," said the servant.

This made the Count's friends wonder still more; and the Count bade the servant call the boy into the room.

"My lad," he said, "you have done a piece of work of which the greatest artists would be proud. What is your name, and who is your teacher?"

"My name is Antonio Canova," said the boy, "and I have had no teacher but my grandfather the stonecutter."

By this time all the guests had crowded around Antonio. There were famous artists among them, and they knew that the lad was a genius. They could not say enough in praise of his work; and when at last they sat down at the table, nothing would please them but that Antonio should have a seat with them; and the dinner was made a feast in his honor.

The very next day the Count sent for Antonio to come and live with him. The best artists in the land were employed to teach him the art in which he had shown so much skill; but now, instead of carving butter, he chiseled marble. In a few years, Antonio Canova became known as one of the greatest sculptors in the world.

If you use Facebook or Google+ & enjoyed Antonio Canova, please tell your friends and let us know to find more like it for you!