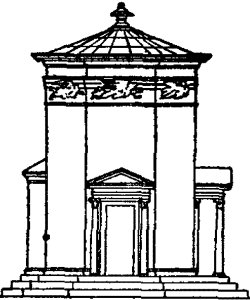 North Wind likes a bit of fun as dearly as a boy does, and it is with boys he likes best to romp and play.

One day North Wind saw a brave little fellow eating his lunch under a tree. Just as he went to bite his bread, North Wind blew it out of his hand and swept away everything else that he had brought for his lunch.

"You hateful North Wind!" cried the little fellow. "Give me back my supper. I'm so hungry."

Now North Wind, like all brave beings, is noble, and so he tried to make up for the mischief he had done.

"Here, take this tablecloth," said North Wind, "and, in whatever house you stay, spread it on the table; then wish, and you shall have everything you wish for to eat."

"All right!" said the boy, and he took the tablecloth and ran as fast as he could to the first house, which proved to be an inn.

"I have enough to pay for lodging, so I'll stay all night," he said to himself.

"Bring me a table," he ordered the innkeeper, as he went to his room.

"Ha! ha!" laughed the innkeeper. "You mean bring me a supper."

The innkeeper brought the table, but, after the door was shut, he watched through the keyhole to see what would happen.

"Beans, bread, and bacon," ordered the boy, as he spread out his tablecloth. On came beans, bread, and bacon through the open window, whirled in by North Wind. Smoking hot they all were, too, for the dishes were tightly covered. After supper was over, the boy went sound asleep.

North Wind did not waken him as the innkeeper took the table and the table-cloth and carried them down-stairs. Next morning the boy was hungry again, but there was no tablecloth and so no breakfast.

"You are a cheat, North Wind; you have taken back your tablecloth."

"No," said North Wind, "that is not the way I do." But the boy did not get his tablecloth.

After a time North Wind met him again out under the trees.

"This time I will give you a sheep," he said. "Each time that you rub his wool, out will drop a gold piece. Take care of him."

The boy ran back and found the sheep at the door of the stable, behind the inn. He caught the sheep by a strap which was around its neck, and led it slowly up the stairs of the inn, to the room from which the tablecloth had disappeared the night before. 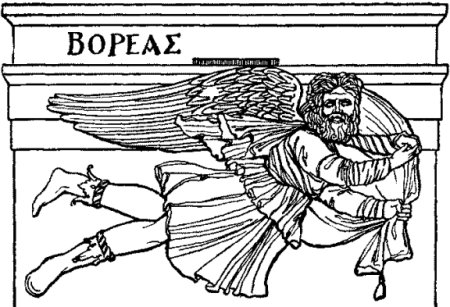 As the boy was hungry for his breakfast, he obeyed North Wind's command and patted the sheep upon its back. A gold piece fell out of its fleece upon the floor.

"Good old North Wind!" said the boy. "Here's my breakfast and some hay for my sheep. Come breakfast, come hay," and through the open window came first a bundle of hay, and then a fine breakfast for the hungry boy. After breakfast the boy paid for a week's lodging with the gold piece.

He slept soundly that night with his sheep for his pillow, and the next night also, but the third morning when the boy awoke, his head lay upon the floor and the sheep was gone.

Perhaps too many gold pieces had been seen in the boy's hand, for he had patted his sheep very often.

He accused North Wind again. "You have taken back your sheep. I don't like you. You are as cold-hearted as you can be."

But North Wind said nothing. He put a queer stick into a bag and gave it to the boy and told him to go back and lock his door as tightly as before.

"Talk to the bag," he said, "and guard it as carefully as if there was a jewel in it."

That night the boy was wakened out of his soundest sleep by screams for help in his room. There was the innkeeper running about, and that queer stick was pounding him, first on the head, then on the feet, then on his back, then in his face.

"Give me back my sheep," said the boy.

"Get it; it is hidden in the barn," said the innkeeper.

The boy went out and found his sheep in the barn and drove it away as fast as he could, but he forgot about the innkeeper, and, maybe, that stick is pounding him to this day.

If you use Facebook or Google+ & enjoyed A Legend Of The North Wind, please tell your friends and let us know to find more like it for you!