Daedalus was a skillful workman in many ways. One of the first things he did to make himself famous was to build a maze. It had so many winding walks and crooked paths that anyone who walked in ten steps without a guide never could get out unaided.

He built this maze for his king, but before many years he offended the king in some way and was locked up in a high tower. In the roof of the tower were hundreds of doves, and as they flew back and forth, Daedalus said:

"My king rules the land and the sea, but not the air. I will try that way of escape."

So he set to work to make wings for himself. He shaped two great frames and covered them with feathers. The largest plumes he sewed on with thread, and the smaller ones he fastened with wax.

Icarus, his son, stood and looked on, catching any of the feathers the wind tried to blow away. He troubled his father much, however, by taking the wax and making little balls, which he tossed about the room.

The keeper of the tower thought the wise man very silly to spend his time making blankets of feathers, Daedalus never let the keeper of the tower see how he curved and pointed the corners of his frames. The keeper told how foolish the wise man had grown from being shut up so long; how he spent his time gathering feathers to make great blankets. The people pitied him, not knowing that this very punishment was giving Daedalus another chance to make himself famous.

One dark night Daedalus fastened the broad wings to his shoulders, and jumping from the window found he could sail like a dove, but he could not carry his boy. Back he flew and, folding his wings, slipped into the window. Now he must make a pair for Icarus. 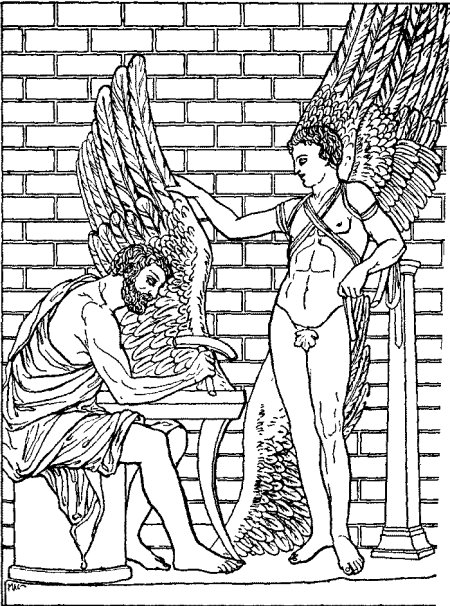 Soon this second pair was done, but the little fellow had to be taught like a young bird how to use them. Many a time if Daedalus had not caught him on his own great wings, Icarus would have gone tumbling heels over head, down, down to the foot of the tower.

Finally, Icarus, too, could sail like a pigeon, and if the night had not been so dark it would have been great fun to see these two new birds fly out of that tower window.

Keeping their wings so close to each other that they almost touched, they flew away over houses and fields. Before the sun came out, Daedalus told his boy to be careful to keep near him. "Don't fly too near the sun, for the heat will melt the wax, nor too low, for the damp will wet the feathers. Keep close to me."

When the morning dawned they saw the men plowing in the fields stop work to look at them. Shepherds left their flocks and ran miles to see where those strange birds were going. No one could tell who they were. It was grand to be so free and to fly so swiftly.

An eagle saw them and flew near. They felt the breeze from his powerful wings, and swifter went their own. The eagle, frightened, turned and mounted toward the sun. Icarus forgot his father's warning and followed. Daedalus flew on and on, thinking his boy was beside him. Up, up went Icarus swifter than the eagle and swept proudly past him toward the sun. The next instant he felt his wings loosen and droop.

Just then, Daedalus, who was miles away, turned his head, for he heard the boy call him.

"Icarus, Icarus, where are you?" his father shouted. There was no answer, but the mass of feathers in the blue sea below told the story. Flying down, Daedalus searched till he found the body, and, tenderly laying it in the earth he wept that he had ever thought of wings.

The land where this happened was wild, and only savage beasts lived in it, so Daedalus flew away to Sicily. There he built a temple and on its walls hung up his wings forever.

He became so proud of his own success that he believed no one else could invent anything. He was willing, though, to teach others all he knew, and sister, living near, sent her son, Perdix, to him to learn what he could.

This boy was quick to see, to hear, and to learn, and he could invent things himself.

One day when Daedalus was slowly cutting through a log with an ax, the boy showed him how much quicker he could do it with a saw he had made. No one had ever heard of a saw before, and Daedalus was angry.

"Who told you how to make this?" he asked.

"I brought home yesterday the backbone of a great fish cast up by the sea, and I made this like it, but of iron; that is all," said Perdix.

Another time Daedalus was trying to draw a perfect circle. Thirteen times he tried and failed.

"Take my irons, if you will not be angry with me," said Perdix, and he handed him a pair of compasses.

Here again was something no man had ever seen. But Daedalus, instead of being proud of his nephew, was angrier than before.

"You will be claiming that you are greater than Daedalus, who first sailed through the air, ungrateful boy," said his uncle.

"I have only tried to help you," answered Perdix.

Not long after this, when the two were in a tall building, Daedalus gave Perdix a push that sent him headlong toward the ground. The goddess Minerva, who loves learning, saw him falling and changed him into a partridge before he touched the earth. Unlike Daedalus, he has always kept his wings.

Perdix, the partridge, builds his nest low on the ground and stays in low branches. Perhaps he is afraid he may not be saved from another fall if he goes again into high places.

If you use Facebook or Google+ & enjoyed Why The Partridge Stays Near The Ground, please tell your friends and let us know to find more like it for you!