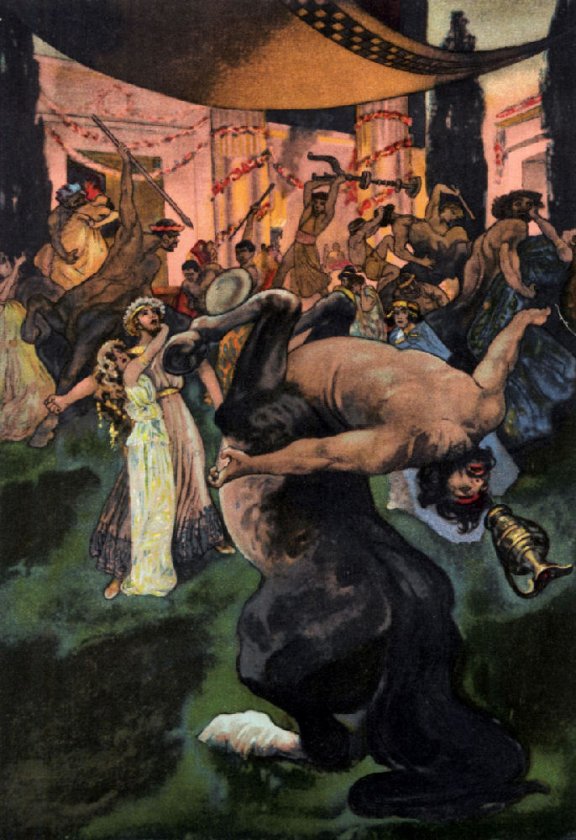 Theseus, the hero king of Athens, had a reputation for great strength and bravery; but Pirithous, the son of Ixion, one of the most famous heroes of antiquity, wished to put him to the test. He therefore drove the cattle which belonged to Theseus away from Marathon, and when he heard that Theseus, weapon in hand, was following him, then, indeed, he had what he desired. He did not flee, but turned around to meet him.

When the two heroes were near enough to see each other, each was so filled with admiration for the beautiful form and the bravery of his opponent that, as if at a given signal, both threw down their weapons and hastened toward each other. Pirithous extended his hand to Theseus and proposed that the latter act as arbitrator for the settlement of the dispute about the cattle: whatever satisfaction Theseus would demand Pirithous would willingly give.

"The only satisfaction which I desire," answered Pirithous, "is that you instead of my enemy become my friend and comrade in arms."

Then the two heroes embraced each other and swore eternal friendship.

Soon after this Pirithous chose the Thessalian princess, Hippodamia, from the race of Lapithae, for his bride, and invited Theseus to the wedding. The Lapithae, among whom the ceremony took place, were a famous family of Thessalians, rugged mountaineers, in some respects resembling animals - the first mortals who had learned to manage a horse. But the bride, who had sprung from this race, was not at all like the men of her people. She was of noble form, with delicate youthful face, so beautiful that all the guests praised Pirithous for his good fortune.

The assembled princes of Thessaly were at the wedding feast, and also the Centaurs, relatives of Pirithous. The Centaurs were half men, the offspring which a cloud, assuming the form of the goddess Hera, had born to Ixion, the father of Pirithous. They were the eternal enemies of the Lapithae. Upon this occasion, however, and for the sake of the bride, they had forgotten past grudges and come together to the joyful celebration. The noble castle of Pirithous resounded with glad tumult; bridal songs were sung; wine and food abounded. Indeed, there were so many guests that the palace would not accommodate all. The Lapithae and Centaurs sat at a special table in a grotto shaded by trees.

For a long time the festivities went on with undisturbed happiness. Then the wine began to stir the heart of the wildest of the Centaurs, Eurytion, and the beauty of the Princess Hippodamia awoke in him the mad desire of robbing the bridegroom of his bride. Nobody knew how it came to pass; nobody noticed the beginning of the unthinkable act; but suddenly the guests saw the wild Eurytion lifting Hippodamia from her feet, while she struggled and cried for help. His deed was the signal for the rest of the drunken Centaurs to do likewise, and before the strange heroes and the Lapithae could leave their places, every one of the Centaurs had roughly seized one of the Thessalian princesses who served at the court of the king or who had assembled as guests at the wedding.

The castle and the grotto resembled a besieged city; the cry of the women sounded far and wide. Quickly friends and relatives sprang from their places.

"What delusion is this, Eurytion," cried Theseus, "to vex Pirithous while I still live, and by so doing arouse the anger of two heroes?" With these words he forced his way through the crowd and tore the stolen bride from the struggling robber.

Eurytion said nothing, for he could not excuse his deed, but he lifted his hand toward Theseus and gave him a rough knock in the chest. Then Theseus, who had no weapon at hand, seized an iron jug of embossed workmanship which stood near by and flung it into the face of his opponent with such force that the Centaur fell backward on the ground, while brains and blood oozed from the wound in his head.

"To arms!" the cry arose from all sides. At first beakers, flasks and bowls flew back and forth. Then one sacrilegious monster grabbed the oblations from the neighboring apartments. Another tore down the lamp which burned over the table, while still another fought with a sacrificial deer which had hung on one side of the grotto. A frightful slaughter ensued. Rhoetus, the most wicked of the Centaurs after Eurytion, seized the largest brand from the altar and thrust it into the gaping wound of one of the fallen Lapithae, so that the blood hissed like iron in a furnace. In opposition to him rose Dryas, the bravest of the Lapithae, and seizing a glowing log from the fire, thrust it into the Centaur's neck. The fate of this Centaur atoned for the death of his fallen companion, and Dryas turned to the raging mob and laid five of them low.

Then the spear of the brave hero Pirithous flew forth and pierced a mighty Centaur, Petraeus, just as he was about to uproot a tree to use it for a club. The spear pinned him against the knotted oak. A second, Dictys, fell at the stroke of the Greek hero, and in falling snapped off a mighty ash tree; a third, wishing to avenge him, was crushed by Theseus with an oak club.

The most beautiful and youthful of the Centaurs was Cyllarus. His long hair and beard were golden; his smile was friendly; his neck, shoulders, hands and breast were as beautiful as if formed by an artist. Even the lower part of his body, the part which resembled a horse, was faultless, pitch-black in color, with legs and tail of lighter dye. He had come to the feast with his wife, the beautiful Centaur, Hylonome, who at the table had leaned gracefully against him and even now united with him in the raging fight. He received from an unknown hand a light wound near his heart, and sank dying in the arms of his wife. Hylonome nursed his dying form, kissed him and tried to retain the fleeting breath. When she saw that he was gone she drew a dagger from her breast and stabbed herself.

For a long time still the fight between the Lapithae and the Centaurs continued, but at last night put an end to the tumult. Then Pirithous remained in undisturbed possession of his bride, and on the following morning Theseus departed, bidding farewell to his friend. The common fight had quickly welded the fresh tie of their brotherhood into an indestructible bond.

If you use Facebook or Google+ & enjoyed Theseus And The Centaur, please tell your friends and let us know to find more like it for you!